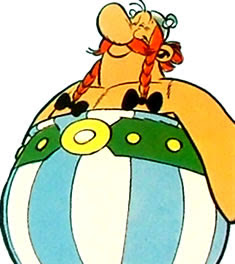 Back on 27 October 2005 the IPKat recorded the decision of the Court of First Instance in Case T- 336/03 Les Editions Albert René v OHIM, Orange A/S. In short, Orange applied to register MOBILIX as a Community trade mark for telecommunications-related goods and services in Classes 9, 16, 35, 37, 38 and 42. René, publishers of the Asterix stories that featured a character called Obelix, opposed, citing its earlier Community and national trade mark registrations of the word OBELIX for a large number of goods and services and pleading a likelihood of confusion.

Partially annulling the decision of the Opposition Division, the Board of Appeal allowed the opposition in respect of certain goods and services in Classes 9 and 35 but rejected it in respect of all the others. René appealed.The CFI dismissed the appeal. Attempts by René to admit fresh evidence to support the contention that OBELIX was a well-known mark (and therefore that it was entitled to protection under Article 8(5) of Council Regulation 40/94) were rejected. Nor, having failed to oppose the application on the basis of Article 8(5), could Rene raise that ground of opposition on appeal to the CFI. As to the likelihood of similarity of MOBILIX and OBELIX, the words were at best only slightly similar in visual terms; any aural similarity was however negated by their conceptual dissimilarity.

Today the European Court of Justice has received the Opinion of Advocate General Trstenjak in Case C-16/06 P, on appeal from the CFI. All in all, there were six grounds of appeal:

"... the Judgment of the Court of First Instance violates Article 63 CTMR and general principles of Community administrative and procedural law in that it concluded, contrary to the contested Board decision, that the conflicting marks, OBELIX and MOBILIX, are not similar, thereby taking a decision to the detriment of the Appellant on an issue that had not been properly raised, and thereby exceeding the competence of the Court of First Instance when reviewing decisions of OHIM Boards of Appeal in a case like the present one.

... the Court of First Instance violated Article 74 CTMR in refusing to accept that the OBELIX mark was well-known and highly distinctive.

... the Court of First Instance violated Article 63 CTMR and its own Rules of Procedure in that it declared inadmissible the Appellants claim before that Court to annul the contested Board decision on the grounds that it had not applied Article 8 (5) CTMR to the case at hand.

... the Court of First Instance violated articles 44 and 48 of its own Rules of Procedure in that it declared inadmissible the claim, presented in the alternative at the hearing, that the Court remand the case to the Board in order to allow the Appellant to establish the reputation of the mark OBELIX.

In an Opinion running to 114 paragraphs the learned AG has recommended that the ECJ dismiss the appeal on all grounds. The IPKat feels that this was a tedious and complex attempt by René to summon procedural minutiae in support of its position where the real issue -- the fact that the opposition went against it on an assessment of the facts -- was not amenable to challenge before the ECJ. Merpel says, it's strange how these things happen: I never even began to connect OBELIX and MOBILIX with one another till I read the grounds of opposition.

Reviewed by Jeremy on Thursday, November 29, 2007 Rating: 5
The IPKat licenses the use of its blog posts under a Creative Commons Attribution-Non Commercial Licence.