Also from the Court of First Instance today was Case T‑90/05, Omega SA v Office for Harmonisation in the Internal Market, Omega Engineering, Inc. Omega SA applied to register as a Community trade mark the figurative sign depicted here (above, right), for goods and services in Classes 3, 9, 14, 16, 25, 28, 35, 37, 38, 41 and 42. Omega Engineering opposed, claiming a likelihood of confusion and dilutionary damage to its earlier UK and French registrations of the word OMEGA in Classes 9 and 42. It objected specifically to Omega SA's application to register various goods and services in Classes 9 and 42, the registration of which, it alleged, ran contrary to the terms of an agreement between the two parties that the applicant would not register the trade mark in respect of apparatus industrially and/or scientifically employed for measuring variable parameters.

"prima facie, it appeared that the applicant had acted in breach of the agreement by including in the application ‘installation for checking, measuring time and distance, mainly for use in sporting, scientific and industrial fields’. In that regard, the Board of Appeal considered that ‘time’ and ‘distance’ were variable parameters and that it was not clear that the list of variable parameters cited in the agreement was exhaustive. The Board of Appeal stated that it was therefore doubtful whether the agreement could be relied on against the opponent".

Omega SA appealed further to the CFI, which dismissed its appeal.

The sole ground of appeal was the submission that the Board had misapplied Article 8(1)(b) of Council Regulation 40/94 and that there was, in fact, no likelihood of confusion. This did not stop the CFI commenting on the agreement. It said:

"49 With regard, thirdly, to the agreement between the parties, it must be noted that by that agreement the applicant undertook, inter alia, not to seek registration of the trade mark OMEGA in respect of apparatus industrially or scientifically employed for measuring or controlling variable parameters such as temperature, pressure, force, load, vibration, electrical conductivity, liquid level, acidity, humidity, strain and flow. However, it is not apparent from the provisions of that agreement that the intervener undertook not to oppose registration of the trade mark OMEGA by the applicant. In any event, without its being necessary to consider the consequences of the agreement for the parties, the fact remains that the agreement is irrelevant to the assessment of the likelihood of confusion in the present case". 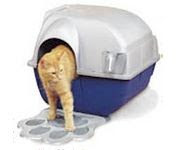 The IPKat understands that a great deal of time and effort, in the world's increasingly convergent marketplaces, is spent in negotiating coexistence agreements so that the same or similar marks can be profitably exploited by different businesses for their mutual benefit and for the good of consumers. It therefore seems quite wrong that OHIM and the CFI should treat them as irrelevant as a matter of principle.

Right: the IPKat test-drives the Omega Paw Self Cleaning Cat Litter Box, not apparently connected with either of the parties in this dispute

Adds Merpel, if I promise not to apply for a CTM in a specific class but then do so, to the obvious discomfort of another business that has an interest in the same mark or a highly similar one, surely the agreement must be taken into account if the argument of bad faith is raised, even if the existence and content of the agreement do not shed any direct light on the question of likelihood of confusion.

Reviewed by Jeremy on Tuesday, November 06, 2007 Rating: 5
The IPKat licenses the use of its blog posts under a Creative Commons Attribution-Non Commercial Licence.