The Case of the Appeal-Proof Metaphor 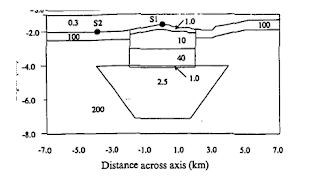 Amazing, says the IPKat -- you wait years for a post on this weblog that has anything to do with Norway and then suddenly two come along, one right after the other, just like London buses. Today's Norwegian flavour is provided by the monumental judgment in the Patents Court for England and Wales by Mr Justice Mann in Schlumberger Holdings Ltd v Electromagnetic Geoservices AS, the latter being incorporated in Norway. This morning's judgment, all 330 paragraphs plus six appendices of it. comes after 17 days in court ([2009] EWHC 58 (Pat)).  It would probably take this scientifically uneducated member of the IPKat team almost as long to read and (pretend to) understand it.
In short, Schlumberger sought to revoke three patents belonging to EG, a competitor in the field of oil and gas exploration, alleging anticipation and/or obviousness. In the end, validity hinged on identity of the hypothetical skilled addressee to whom the patents should be taken as being addressed. Said the judge in his introduction:

"The technology and physics involved is complex to a layman and requires a grasp of some less than everyday science and mathematics. The parties have agreed that I should have the assistance of an expert adviser .... His role was, of course, not judicial. It was to inform and educate on matters of science.  ... the court is grateful to him for his assistance. If any of the science in this judgment is wrong then the fault is that of the pupil and not the teacher".

"In what follows I set out the background against which the patents in suit operate. I shall have to deal with some physics and geology. I shall do so in terms which are generally appropriate for describing those matters at a lowish level, and which will not be a full scientific description of the phenomena involved. A pure physicist may well find some of the description inadequate in scientific terms. I am sure it is. It will, however, suffice for present purposes. My adoption of this technique, and in particular my adoption of what may seem to the purist to be less than wholly accurate metaphor from time to time, does not necessarily betoken a failure on my part to understand accurately the actual physics involved. Nor does it betoken a shortage of evidence on a properly expressed scientific basis - I was certainly not short of that in this case. It is merely an appropriate way of setting out the background at this stage. The same applies, to an extent, in the later, more detailed, parts of this judgment. As will be seen, the adoption of metaphor has a precedent in the facts of this case - the central patent itself adopts a metaphor rather than an accurate description of the physics, and uses scientific terms in a manner which the scientists involved in this case accepted was technically inaccurate".

It seems to the IPKat that technical assessors, the use of whom is provided for by the Rules, are not used as often as they might be.  Even patent judges with a scientific background sometimes appear to struggle when the dispute before them involves an area of science that was not on the syllabus in their younger days (or did not exist at all).   Merpel, in contrast, is fascinated by the judge's disclaimer of the use of metaphor as a means of blocking off a possible ground of appeal and wonders whether it has any precedents.
Other Kats may wish to comment on some of the other aspects of this case in due course, so keep an eye on this blog in case they do!
Why London buses come in threes here
The Case of the Appeal-Proof Metaphor

Reviewed by Jeremy on Thursday, February 19, 2009 Rating: 5
The IPKat licenses the use of its blog posts under a Creative Commons Attribution-Non Commercial Licence.