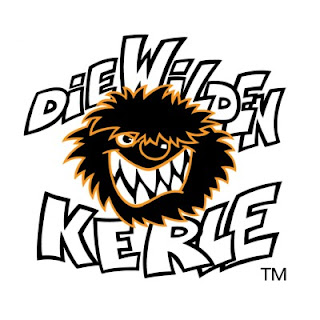 The IPKat is always pleased to hear from his friend and occasional contributor Thorsten Lauterbach (Aberdeen Business School, The Robert Gordon University), who has sent him the following piece of information:

"The author of the popular German youth book series “Wilde Kerle” (“Wild Boys” or “Wild Things” -- if that’s appropriate as a translation of a youth book title) ended up in a Munich court following a claim to joint authorship in the literary characters which feature in the book.

The author, who used to coach a youth football team, at some point asked his friend, a cartoonist, to create a logo for the team kit. This led to the creation of one of the most successful book series for young children, comprising thirteen books and no fewer than three movies about the adventures of a group of football-playing youths in a small town.  The two friends later fell out, probably over the question who should get how much of the royalties, and whether in future anything could be published – both in terms in books and movies – without each other's agreement.

The cartoonist argued before the Landgericht München I (Munich Regional Court) that his contribution – cartoons depicting the characters of the stories – should give him joint authorship (and therefore joint ownership) of the literary characters that appeared in the stories. If he won this argument, not only would he be entitled to a greater share of the royalties and control over future editions of the already published books and movies, but he could also lay claim to any future output. Understandably, the author of the stories – and creator of the literary characters – vehemently disputed this contention.

In only one issue did the court side with the disgruntled cartoonist, holding that no new editions of the already-existing thirteen books may be published without the cartoonist’s drawings. However, that is as good as it got for the claimant, since the court also held that, while he clearly authored the cartoons of the stories’ characters, these did not entitle him to be considered as joint author in the literary work and the characters. This is an interesting point, as the cartoons no doubt led to the characters becoming alive in a particular way in the minds of the readership. However, the court argued that the cartoons constituted individual ‘illustrations’ at certain points within the thirteen novels, rather than something akin a ‘comic strip’ where illustrations made up both stories and characters. In the former, the lack of sufficient interaction between the illustrations and the plot of the story and its characters leads to failure of the joint authorship claim: particular characteristic features of the protagonists used in the written text of the stories cannot be found so explicitly in the accompanying illustrations. Illustrations which are individual and isolated from the stories in this way can be interpreted in many different ways, in the opinion of the court, and are meant and are limited to merely suggest to the reader/observer a way to picture the boys in his/her imagination.

As a consequence, the combination of the literary work with the illustrations could be regarded, at best, as a collective work. The author of the stories is accordingly free to write further novels without input by his now former friend; nor was the cartoonist entitled to damages in respect of “Wilde Kerle” films IV and V which were created without his involvement as a director, nor were his cartoons used in the making of those movies. At this stage, it is not clear whether this is bound to go to extra time (or should that be a replay?), since the claimant has not indicated his plans to appeal the judgment (Az: 21 O 13662/07, LG München I, 23 January 2009)".

Reviewed by Jeremy on Monday, February 16, 2009 Rating: 5
The IPKat licenses the use of its blog posts under a Creative Commons Attribution-Non Commercial Licence.