Cutting edge in the Middle Ages 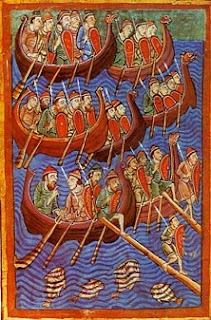 German and Austrian media report of an unusual case of possible trade mark infringement dating back to the age of the Vikings and concerning high quality swords that bore the inscription Ulfberht.

According to the news reports British scientists have analysed the contents of Viking swords and found that some of the best Viking smiths may have had their work imitated and copied. Dr Alan Williams, an Archaeometallurgist at the Wallace Collection in London is cited as saying that the best Vikings swords bore the inscription Ulfberht (+VLFBERH+T). The original Ulfberht swords were completely made of high carbon steel, which ensured a long lasting and strong blade, whereas cheaper imitations only had a outer layer of steel with a core that was made of simple -- and much softer -- iron. Interestingly enough both type of swords, the original Ulfberht and the alleged copies, bore the same inscription Ulfberht, which appeared to indicate trade origin. Whether a Viking had purchased a genuine Ulfberht could be checked when sharpening the sword and hitting the softer iron layers of the imitation. Unfortunately, the inferior quality might in many cases only have been revealed during battle - with potentially deadly consequences for its owner.

Above, a photo taken by Alan Williams, showing a genuine Ulfberht sword from the Wuerttembergisches Landesmuseum, Stuttgart, Germany bearing the inscription +VLFBERH+T

Most Ulfberht swords have been found in Scandinavia and near the coast of the Baltic Sea. However, confusingly during medieval time the name Ulfberht was not a Viking name but a name that was common in the German region of Franconia, today a part of Bavaria in Southern Germany. Alan Williams suggests that the Ulfberht may have a been an invented brand name, just like Kodak. May this have been a a very early form of certification (or collective) mark, the IPKat wonders...?
Related information on how "UK scientists help museum curators to determine Viking trade routes by the metal in their swords" can be found on the National Physical Laboratory's website and here.
Cutting edge in the Middle Ages

Reviewed by Birgit Clark on Tuesday, February 17, 2009 Rating: 5
The IPKat licenses the use of its blog posts under a Creative Commons Attribution-Non Commercial Licence.