David Pearce Thursday, February 26, 2009 - eqe, patents
Following the IPKat's little rant last week, he has been passed some more details and further anonymous comments on the contentious subject of the EQEs.  The document he was pointed to first (now posted on the IPKat's Google Groups website) contains some very interesting details about the reasons behind the recent changes made to the EQE Regulations (available here), and some clear pointers to the form the Implementing Regulations will take, once they have been finalised. The main points appear to be that the language requirement relating to paper C will be abolished as from 2010, and that a minimum of four years full time education at university level will be required in order to take the EQEs after 3 years in the profession.  A draft proposal to restrict the books that candidates are allowed to take into the exams has apparently been dropped. The IPKat is not really too bothered by either of the current proposals, and in particular welcomes the abolition of the paper C language lottery, although he has commented previously on the apparently arbitrary nature of the 3/4 year requirement, which doesn't really make any sense (except if you don't like UK candidates qualifying too early).
The IPKat has also been pointed to a very illuminating document, available in full from the EPO here. This provides a summary of the pass rates and numbers of people in each member state who are entitled to call themselves "European Patent Attorney".  Parts of this summary were apparently used in illustrating the proposals for the new Regulations on the EQEs.  What the IPKat was interested, and a little surprised, to see was the large number of qualified EPAs still on the register that have never passed the exams.  This is shown in the following figure (click for a larger view): 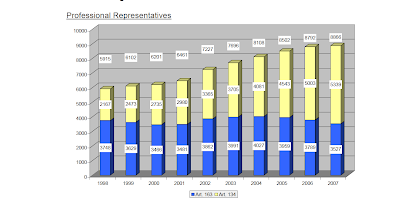 According to these figures, in 2007 there were 8866 EPAs on the register, 5339 of which had passed the EQEs. Quite a large proportion, totalling 3527 EPAs (40%), had not qualified by passing the exams. Instead, these attorneys had qualified automatically by being already entitled to act as attorneys before their state joined the EPC (the so-called "grandfather clause" of Article 163 EPC1973). A large majority will, of course, be resident in the three main countries of the EPC: Germany, France and the UK. This means that many of these attorneys will have been calling themselves EPAs for the past 30 years.
If the IPKat had his way (which, of course, will not happen), all of these attorneys would also be sitting the papers to be taken by prospective EPAs next week.  Some of them, he suspects, would inevitably fail.  Would this be a bad thing? If the EPO is serious about "raising the bar", one of the justifications for the proposed changes to the EQE regulations, should they not also ensure that all those having the right to call themselves a European Patent Attorney are actually qualified to the same standard?
A related point that keeps coming up, which the IPKat cannot confirm for certain, is how many of those on the EQE Examination Committe have actually sat and passed the exams they are setting and marking.  It would be nice to know that they have all passed the same test that they expect others to pass. After all, it would be a bit disturbing if university examination papers (say) were set by people with only honorary degrees, would it not?
Probably the most interesting figure from the document is the one that was used in the draft regulations.  The following figure shows the numbers of candidates overall having taken one or more exams over the period from 1998 to 2007: 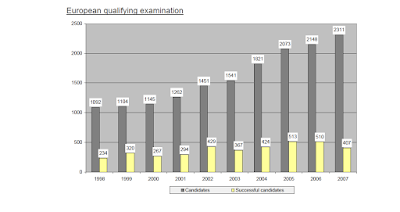 Are the exams getting harder, are there more candidates being registered who are less able to pass the exams, or is there some other reason for the increase in numbers in candidates not correlating well with an increase in numbers qualifying? The IPKat doesn't know.
Some more interesting data that the IPKat gleaned from the EPO document illustrates the difference between those in the big three member states (DE, FR, GB) trying to become qualified as EPAs compared to those from states not having one of the official languages as their national language.  From the results in 2007 (which, remember, was a particularly bad one for paper C), 29.5% of UK candidates who took one or more papers became EPAs, while only 19.7% of French candidates and 18.1% of German candidates passed. Dutch candidates did slightly better with 20.3%.  For other non-EPO language countries, however, the picture looks a bit more grim.  Only 9.4% of Italian candidates made it, and a mere 5.6% of Spanish candidates passed.  As the following figure shows, very few Spanish candidates in total have passed the exams since Spain joined the EPC in 1986, and only 21 were on the register in 2007, the rest being honorary entrants: 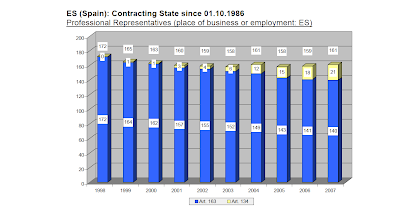 The situation for many other countries is even worse, with several countries having no properly qualified attorneys at all.  The IPKat wonders whether any realistic (rather than merely token) efforts are being made to improve this.  He can understand why Spain would like to have Spanish accepted as another official language of the EPC (the same argument would of course also apply to Italy, Greece, Hungary etc.), although he thinks it makes about as much sense as having Welsh an official language of UK patents.
EQE data overload

Reviewed by David Pearce on Thursday, February 26, 2009 Rating: 5
The IPKat licenses the use of its blog posts under a Creative Commons Attribution-Non Commercial Licence.