Official: health can damage your brands 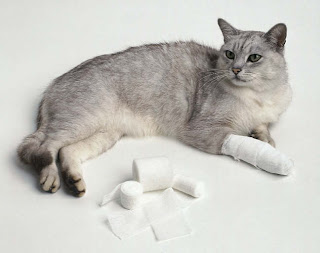 Every brand owner's book of nightmare scenarios is likely to contain one in which your popular brand gives its name to a medical condition. Something not dissimilar happened back in the 1980s, when appetite suppressant AYDS was all but driven from the market once Auto-Immune Deficiency Syndrome was handily termed AIDS -- but that was just a case of hard luck, being the wrong brand name at the wrong time.
Right: the IPKat has become a victim of PlayStation Paw
Owners of the PlayStation and Wii trade marks and brands must be feeling most disgrunted at an article that appeared in this morning's Telegraph, penned by Rebecca Smith, the Telegraph medical editor, under the title "Excessive PlayStation gaming causes new skin condition" (you can read it here).

The article discusses a skin condition displayed by a 12-year-old girl in Switzerland, who developed lesions on her hands after playing on her games console for several hours every day:

"Dermatologists have called the condition PlayStation palmar hidradenitis and said the condition cleared up after the patient stopped paying altogether for ten days. The lesions in the standard version of the disorder normally appear on the soles of the feet in children who play lots of sport or take part in intensive physical exercise such as jogging. It it thought to be connected to intense sweating but it is very unusual for it to appear on the hands. Doctors at the Geneva University Hospital in Switzerland found the girl had not played any sport and the lesions only appeared after she had started to play on her PlayStation for several hours a day".

WebMD Jennifer Warner has written on another condition, Wiitis, or Nintendinitis, in a healthy 29-year-old male medical resident who woke up one morning with intense pain in the right shoulder. He hadn’t participated in any sports or physical exercise recently, but he had just purchased a Nintendo Wii video game system and had spent several hours playing the tennis video game.

The IPKat is most concerned at the (mis)appropriation of valuable intellectual property assets for this purpose, not just in terms of the damage it can do to brand values but because of the encouragement it gives to people to use trade marks as generic terms. It also adds a new dimension to the due diligence exercise that accompanies the assignment of a brand-based business: now teams of junior lawyers will be told to go away and check out target brands in the various medical databases.  Merpel says, what we really need is a good Latin term for words like PlayStation so that the related medical condition sounds like a much more serious condition ...
Do readers know of any other medical conditions that have been named after brands? If so, please tell us.
Official: health can damage your brands

Reviewed by Jeremy on Wednesday, February 25, 2009 Rating: 5
The IPKat licenses the use of its blog posts under a Creative Commons Attribution-Non Commercial Licence.