Fighting like Cat and Dog - The Apple/Samsung Spat Continues 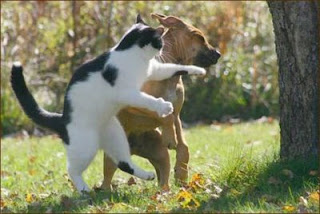 Despite being one of Samsung’s best customers (with recent contracts for components worth $7.8 billion if reports are to be believed), Apple has not let good business get in the way of a good fight. Having already taken its bat home over the alleged infringement of its Community designs, and having won a preliminary EU-wide injunction in the German courts a few weeks ago - noted by the IPKat here – which was then temporarily suspended in all states excluding Germany (see the report on FOSS Patents here), the spat continues. Today’s instalment comes courtesy of the Rechtbank’s-Gravenhage in The Hague, where (according to de Rechtspraak and the delights of Google Translate) a judge has:

The injunction granted is “Europe-wide” (although it has to be said this must be in a somewhat limited sense as Apple’s EP 2059868 (Portable electronic device for photo management) has lapsed in Austria, Belgium, Czech Republic, Estonia, Greece, Iceland, Italy, Latvia, Lithuania, Portugal, Romania, Slovenia, Slovakia, and Spain – see here), and, according to FOSS Patents, is due to take effect in seven weeks.

The decision itself is available here (in Dutch - link courtesy of Engadget), but for those who are hungry for yet more machine translation, the Kat can reveal (again via Rechtspraak) that:

“Apple has infringed on three of its patents and in several of her (registered) Community Design rights and copyright in the matter of her Ipad 1 and 2 and 4 and the iPhone 3G, Apple, and finally slavish (style) imitation. The infringement committed by Samsung include tablet PCs with its Galaxy and Galaxy Tab Tab 10.1 and 10.1v and its smartphones Galaxy S, S II and Ace.”

Which the Kat assumes means that Apple complained of infringement of three of its patents and some registered designs. As far as he can tell, however, the judge found infringement of the EP 2059868 patent only. Samsung is, according to tweakers.net, apparently planning to patch the offending app and continue selling the phones.

So now you know.
Fighting like Cat and Dog - The Apple/Samsung Spat Continues

Reviewed by Matt on Wednesday, August 24, 2011 Rating: 5
The IPKat licenses the use of its blog posts under a Creative Commons Attribution-Non Commercial Licence.