How many leaks will it take to fill the Pacific? 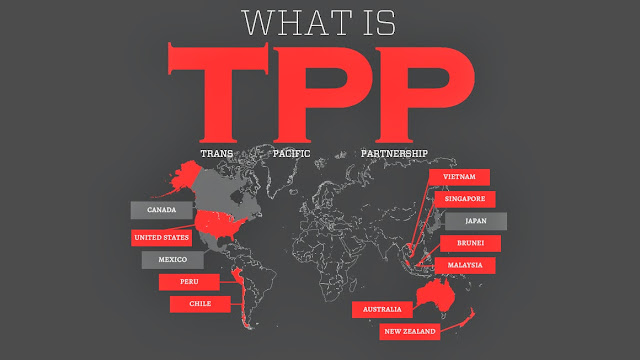 Via Alberto Bellan (katpat!) comes this link to The Verge, featuring an article entitled "WikiLeaks publishes secret draft of Trans-Pacific Partnership treaty" by Jacob Kastranekes. It reads, in relevant part:


"WikiLeaks has published a leaked draft [which this Kat has not yet had time to read] of a secret international trade agreement that could create stricter laws governing digital copyright and freedom of speech. The leaked chapter focuses on intellectual property rights, and is part of a broader agreement called the Trans-Pacific Partnership Agreement (TPP) that has been in the works for several years now between the US, Canada, Australia, Japan, and several other countries. Though the draft is being written in secret, it's rumored to be moving toward a fast track through Congress. Some details of the agreement have been leaked in the past, but today's come from a quite recent draft, dated August 30th, 2013 — it's also the only one to detail which countries are in support of which proposals.

The Sydney Morning Herald received an early look at the leaked draft, and notes that it focuses on the United States' federal and corporate interests, while largely ignoring the rights and interests of consumers. ...

This Kat is dismayed that the lessons of ACTA have apparently not been learned and that what appears to be a treaty of major significance is being negotiated in conditions of such secrecy that -- regardless of its content -- the mere fact that it is being so hushed up creates the implication that there is something to hide. The countries pressing for the TPP are not repressive dictatorships in which secretive governments arrogate for themselves the role of knowing what's best for the ignorant proletarian masses; they are, or purport to be, representative democracies in which governments are elected by and answerable to an informed, involved, aware and interested electorate.  The public at large are believed to be mature enough to be told about proposed amendments to laws governing trade, competition and IP rights at national level, so why is there so much secrecy here?  It's not as if we want or need to know exactly who said what to whom on which occasion: it would be good for us at least to know exactly what sort of provisions are proposed, so we can add, or subtract, our support and make some constructive comments to our governments and representatives.

Matthew Rimmer, IP and climate change enthusiast and one of the relatively few folk whom this Kat regularly follows on Twitter, is quoted as saying:

"One could see the TPP as a Christmas wish-list for major corporations, and the copyright parts of the text support such a view. Hollywood, the music industry, big IT companies such as Microsoft and the pharmaceutical sector would all be very happy with this."

Merpel is all in favour of seasonal gifts, and it's no secret that she's a great fan of IP rights -- but she thinks it's only right that whoever is giving those gifts should know in advance that someone is planning to give them on the donor's behalf.
How many leaks will it take to fill the Pacific?

Reviewed by Jeremy on Thursday, November 14, 2013 Rating: 5
The IPKat licenses the use of its blog posts under a Creative Commons Attribution-Non Commercial Licence.