Eleonora Rosati Friday, January 05, 2018 - Eleonora Rosati, street art; Federica Pezza; Giovanni Maria Riccio; copyright; Italian copyright; graffiti
Street artworks are a peculiar type of copyright works, the most striking feature being the support to which they are attached (often someone else’s property), and the fact that they are usually realised without authorisation from the owner of the support.

Hence, what should their legal treatment be?

This is an issue that has re-surfaced from time to time. For instance, readers may remember that, before it was settled out of court, in the US litigation between a street artist and Moschino, the latter had argued that the former’s graffiti could not be protected by copyright because created out of illegality.

Katfriends Giovanni Maria Riccio (University of Salerno and E-Lex) and Federica Pezza weigh in on this matter, offering an Italian perspective and proposal.

Here’s what they write:

“Perfection of the lines, softness of the colours, harmony of the shapes … You are passionate about art, you are in Italy, and this is precisely what you are looking for.

And that’s why we are now facing new artistic phenomena, including street art.

The expression is generally used to refer to those artworks which are realised in urban contexts without authorisation and located in places accessible to the general public.

Born in the 1970’s in New York City, street art was a way for Big Apple’s cool kids (and a certain “Taki” was the coolest apparently) to identify themselves and being somehow recognisable in such hectic city. During that time, the phenomenon spread to Europe, further developing and focusing on images rather than words. For this purpose, street artists has employed a number of techniques, including spray cans, brushes, and palettes.

All good up to this point. Still, what about Italy? Interestingly enough, also our country has had a role to play in this movement. And this role would be massive, according to some. Precisely, the “Italian Taki” was Fernando de Filippi who, during the same period, started plastering his politically engaged posters on the walls of Milan and other Italian and European cities.

Don’t be surprised, Raphael lover. As that artist used to write: “Contradictions are everywhere”.

The main issue when it comes to street art is assessing whether or not it would be protectable under copyright law.

In Italy, the relevant provisions to be considered are included in Law 22.04.1941 No. 633 (Italian Copyright law, hereinafter ICL). According to Art. 1 ICL, protection is granted to all “creative intellectual works”. Also, protection is “irrespective of the way and type of expression”. Art. 2, No. 4, ICL includes artistic creations in its non-exhaustive list of protectable works.
Unlike other jurisdictions, in Italy there is no statutory fixation requirement. This means that a non-durable work of art is likely to be protected in our legal system if the other requirements for protection are satisfied.

So, what’s the matter with street art?

The main issue with this kind of art, which is also its key feature, is the fact it is normally non-authorised. This is precisely where our fairy tail finishes and the list of criminal offences starts.

The relevant provisions to consider are Art. 639 – “Littering or defacing of someone else’s property” (Deturpamento ed imbrattamento di cose altrui) and Art. 635 of the Italian Criminal Code - “Damaging” (Danneggiamento).

Both provisions are likely applicable to street art. The question, therefore, is whether a behaviour amounting to a criminal offence can also give rise to something that is protectable as a copyright work.

And the answer, given by the ICL, is in the affirmative, considering that our system is neutral to the question of lawfulness. In this sense, lawfulness underlying the creation of a work is not regarded as a condition for the granting of protection.

More problematic is how to strike a balance between the right of the artist over their creation and the property right of the owner of the building.

Our approach moves from this premise and criticises the approach generally taken by Italian scholarly literature. This results, in fact, from the erroneous belief that ownership of the artworks is for the owner of the embodiment, who will be able to dispose of and even destroy the artistic creation. This traditional approach is not methodologically correct. In fact, not only does it not take into account the moral right of integrity of the artist but, above all, it does not consider that this kind of artworks is, in most of the cases, removable. With the result that, in this scenario, the relationship between the owner of the wall and the artwork could not be comparable to the one existing between the painting and its canvas but, rather, between the painting and the wall it attaches to. Therefore, unless a sell-and-purchase agreement took place, the owner of the wall does not seem to have any right over the artwork.

Moving away from the typical private/public property dichotomy, the works of street art should be considered as “common goods”. Such approach, based on a Constitutional notion of property, is rooted within the social and cultural role played by art for the society. This cultural value, we argue, is particularly high in the case of street art, which, by its own nature, is intrinsically related to the context in which it is conceived.

Specifically, there would be a twofold relationship between the artwork and the community, with each of the actors reciprocally influencing the other.

On the one hand, as the artist Stilk notes, “street art reacts to the context”. Let’s take for example the famous San Gennaro of Naples, reproducing a religious icon of the city, or also, in the same area, the artwork from Banksy representing a saint with a gun, expression of the artist's attempt to summarise the contradictions of the city. Indeed, they both belong to the community they live in. Also, often, street artists deliberately employ elements of buildings as part of their creation with the result that, eg, a simple window might become the open mouth of a terrible monster.

On the other hand, street art does influence – incredibly – the community it attaches to, often constituting a means to improve a depressed area. 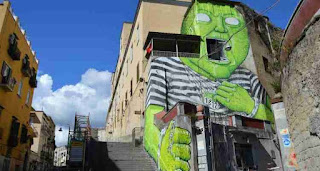 How would it work?

Recognising the common good nature of street art is the first step for shaping an adequate legal treatment. In fact, the consequence of this approach is the need for the adoption of a different notion of ownership, to be conceived in terms of stewardship rather than property.

This is particularly interesting in the case of removal of the work from its original physical support. Who is entitled to remove the work? Is there any notification obligation over the owner of the physical support, or not?

In our opinion, this choice might be granted to a public administrative authority, which could be entitled to take any decision regarding the artistic value of the work, the possibility to remove or to destroy the work itself or even to relocate it to another place, in order to ensure the preservation of the work, where its artistic and cultural values are recognised.

In Italy, this administrative role could be performed by the “Superintendence of Cultural Heritage” (Soprintendenza per i beni culturali), assisted, for this purpose, from a commission of experts.

Such a solution would be beneficial for all of the involved parties. First of all, when compared to the model provided under the VARA in the US, this system is particularly beneficial to the owner of the building. In fact, they would not be imposed anymore transactional costs related to the excessive burden of sending a notification to the artist, being it sufficient the communication to the local Authority of their intention to destruct or remove the artwork. In the same way, the artist, often operating anonymously or under pseudonymous, would be given the opportunity of protect their rights without having to disclose their identity. The main benefit would obviously be for the community. In fact, the solution of attributing to a specific Authority the decisions over street art is more likely to effectively guarantee the collective access to these works and to preserve the cultural heritage of the State. Also it would ensure quicker, objective and impartial decisions, contributing in the same time to the development of good practices in the field.

In conclusion, all the players might benefit from this solution (artists, owners of the building, citizens, the State). Further issues, however, are yet to be solved. And in fact, an adequate administrative body has to be established or, where already existing, supported by a commission of experts. Also, a good balance between the safeguard of the artistic work and the artist's integrity right has to be found. This is just a proposal, not necessarily a solution, and a starting point of discussion, not only in Italy.”
Street heart: urban murals as common goods

Reviewed by Eleonora Rosati on Friday, January 05, 2018 Rating: 5
The IPKat licenses the use of its blog posts under a Creative Commons Attribution-Non Commercial Licence.