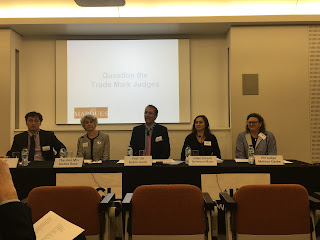 This evening, it was the annual IBIL and MARQUES event - Question the Trade Mark Judges this time in UCL's snazzy new lecture theatre. This year the judges were:

The debate was meant to be chaired by The Rt Hon Professor Sir Robin Jacob but due to various transport related delays, Roland Mallinson stepped into the breach for the first half. Both chairs posed a set of pre-selected questions from the audience.

A quick plug from MARQUES

Before things kicked off, Roland Mallison gave a short plug for MARQUES' amicus curiae team. If readers have any cases where it might be helpful to have MARQUES' input, they should get in touch.

How much training is required to become a judge?

The judges all had very different backgrounds, ranging from Octavia Spineanu-Matei who became a judge in January 1991 shortly after completing her studies to Rose J who recently joined the English bench following a career focused primarily on competition law issues. Similar to France, Spain and Portugal. To be a General Court judge, it’s not obligatory to have experience as a judge e.g. former professors and judges are invited to the party. More than half General Court former professors or lawyers.

Rose J noted that more training is available in the UK for judges these days. It tends to be a mixture of generic approaches to hearings, the art of writing judgments etc. Subject matter training is typically provided on the job by the advocates who present the case. Rose J noted that they tend to be very skilled at pitching the case based on the judge’s expertise.

By contrast, in order for Harri Salmi to become a member of Board of Appeal he had to work at first instance level in the office for many years. He noted that there are two types if Board of Appeal judge - (i) people like him who worked within the office at first instance level for many years; and (ii) people who worked in national courts, lawyers or trade mark attorneys from private practice. Some of this latter category have a completely different background. For example, there is one former architect with 20 years of experience who can provide technical assistance on design matters.

Have we had enough of experts?

Whilst most of us can hopefully agree to their utility in matters of public discourse, in the context of trade mark cases they are somewhat out of favour. Spineanu-Matei noted that the General Court does not hear direct evidence from experts but does see market survey evidence.

As Rose J explained, as in other areas of the law, the English courts have reduced the need for experts when considering the notional reasonable person. It is not beneficial to add expert evidence on these issues - not least due to the expense. However, she did find that survey evidence could be helpful in some circumstances.

Experts don’t survive the English IP Enterprise Court or IPEC due to costs and timing issues so it is not an issue that HHJ Clarke has had to grapple with. Indeed, she was not aware of psychology experts on consumer behaviour being used in trade mark cases at all. In Salmi's view, the usefulness of a psychological study is limited not least because, trade mark law is much more complicated than simply looking at the consumer.

The more common form of evidence in modern trade mark cases comes from Google analytics which can include data such as the number of clicks on the wrong website or the adverts which are served in response to particular key words. This can be proxy evidence for confusion but it has to be looked at closely as the adverts which are served will vary depending on the browser settings and search history. This means that the results can be artificial and different to the results that would have been obtained by average consumers. 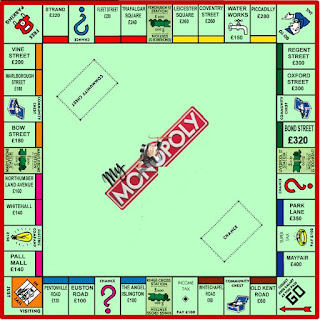 The EUIPO Board of Appeal has heard two oral hearings in 23 years. A third is coming up in November 2018! This hearing concerns the trade mark MONOPOLY (which has been the subject of some monopolistic trade mark manoeuvring). The hearing is in the context of a cancellation action regarding new trade mark applications being filed on a regular basis to avoid the risk of marks being revoked for non use. This is a rare case where it is necessary to have oral evidence to explain the written information submitted to the board. In Salmi's view, it is hard to see the additional value from a hearing as it is usually perfectly adequate to see the information in documents.

Spineanu-Matei saw the value of the short and tightly controlled presentation and debate. In the General Court, each party has 15 minutes at the beginning followed by two hours of debate. In her view, it is helpful for the judges to have this discussion.

Rose J noted that she quite often changes her mind in the course of a hearing and significant evidence can come out from witnesses. It does not necessarily follow that it is worthwhile having an oral hearing in every case. However, regardless of the legal merits, oral hearings provide a secondary benefit - namely a cathartic process for resolving a dispute. It would be interesting to learn whether this reduces the likelihood of an appeal - any readers with data on this, please get in touch!

What do you think of non-traditional marks?

The classic example of this is the 25 second video as a trade mark - you can read more about this in an earlier post from April 2018. The clip comes from the popular game Sniper Elite and shows the effect of being shot by a sniper in Sniper Elite from different angles (it's not pleasant). As HHJ Clarke noted, they are trying to protect the game mechanic. But is a trade mark the appropriate means for doing so, in this Kats view, the answer is clearly "no" but she is willing to be persuaded otherwise - please have a go in the comments below.

As Spineanu-Matei noted, the Regulation is not a fundamental sea change in the the philosophical approach to trade mark law. Salmi elaborated that the fundamental problem is whether this clip actually functions as a trade mark. HHJ raised the example of a pink panther walking or the James Bond intro - for readers in need of a reminder of the latter, I refer you to Alan Partridge.

James St Ville noted that if the clip was at the start of a film or game intro it wouldn't necessarily be an issue. Roland Mallinson raised a further potential issue with sound marks. If a word, as spoken, is registered, is it infringed by the word as written? Lots of fun for future disputes.

Roland Wilding pointed out that in the old days many of these issues could have been avoided with  disclaimers. For example, a disclaimer would clearly state that you can register a word as pronounced but not as written.

By this stage, Sir Robin Jacob had arrived to remind everyone that disclaimers were brought in very early on in trade mark law to deal with the issues associated with signatures potentially granting too broad a scope of protection. Disclaimers are helpful if the trade mark owner knows that the disclaimer is there. The problem is that often it is forgotten and legal letters may have been exchanged before it has been recalled.

Should you have to prove use to the registry in order to retain the mark?

If somebody explicitly told the EUIPO on application that it does not intend to use the mark, there is not a lot that the EUIPO can do about it. As intent to use statements are often ignored, their utility was questioned although they can help to focus the mind of the applicant to focus on their core concerns.

Rose J explained that one of the most difficult aspects of the ASSOS/ASOS case was working out at which stage to make a decision based on notional use compared to use actually made. It did not help that the English language does not lend itself to describing subsets of very general classes such as clothing, footwear and headgear which can be very broad.

Rose J summarised her trade mark experience with the popular refrain that what started as a very simple question  - are people likely to be confused has grown into a very complicated series of tests. As she noted, the way that trade mark law integrates with passing off etc is very complicated when you are approaching this issue afresh.

As Harri Salmi put it, once you become a trade mark lawyer, you never leave, because it is so interesting. Legal questions haven’t fundamentally changed in ten years but it is constantly stimulating and new problems keep coming.

By this stage, the drinks were beckoning but there was time for a few thoughts on the problems that the substantial value test poses - primarily due to a lack of certainty as to what is the substantial value in question. As Salmi explained, adding a trade mark automatically adds substantial value, that’s the whole point. Whilst it's fairly clear that that sort of value is excluded, as Sir Robin noted, this could raise some interesting questions in connection with image rights or merchandising.

Reviewed by Rosie Burbidge on Tuesday, October 23, 2018 Rating: 5
The IPKat licenses the use of its blog posts under a Creative Commons Attribution-Non Commercial Licence.