In memoriam Grumpy Cat: IP and beyond

While this Kat, largely oblivious to the outside world, was putting in his 15-hour days at the INTA Annual Meeting, the feline world was 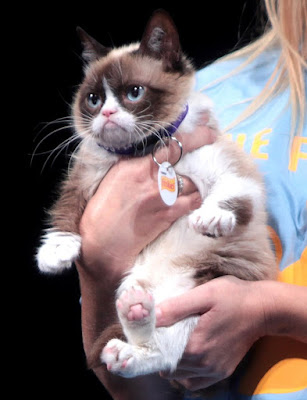 saddened by the announcement that Grumpy Cat had passed away on May 17th at the age of seven. Cause of death was a urinary tract infection.

It was this Kat's youngest offspring who sent him a WhatsApp message, together with a link and a message that only the son of an IP practitioner could write—"The cat that had her intellectual property stolen over and over." His comment got this Kat to think exactly about the role of IP in Grumpy Cat's improbable commercial and media saga.

First, a recap of Grumpy Cat's history (here, here and here). She was born in Arizona on April 4, 2012, and was named Tardar Source " ("tarter sauce", get it?) by her owner, Tabatha Bundesen. Grumpy Cat became a social media phenomenon shortly after her owner's brother posted on September 22, 2012 on Reddit her iconic picture plus caption. Grumpy Cat's anthropomorphic expression of "grumpiness" reportedly was due to a combination of feline dwarfism and malocclusion (underbite).

Whatever the reason for Grumpy Cat's facial appearance, Lolcats and parodies that were created from her photograph went viral. She rapidly became the subject of a wildly popular Internet meme (she won the 2013 Webby Award as the Meme of the Year). All of this turned her distinctive facial features into the basis for seemingly endless expressions of cynicism and despair (Kafkaesque phrases such as "existential angst" and "nihilism" were used). In 2015, she earned a place at Madame Tussauds in San Francisco. By March 2019, Grumpy Cat was reported to have 8.3 million followers on Facebook, 2.4 million followers on Instagram and 1.5 followers on Twitter.

But the story of Grumpy Cat is ultimately about how she served as the foundation for a media and product empire. Already in 2012, she became the subject of media appearances (typically accompanied with one of her (two-legged) family members). In early 2013, Grumpy Cat took part in the South by Southwest Interactive event in Austin, Texas, where reportedly she outdrew the likes of Elon Musk and Al Gore. She later appeared on the Good Morning America and Anderson Live television programs; as well, she did a photoshoot for Time magazine.

From media appearances it was only a short jump to product endorsements. Friskies, the animal food brand, turned Grumpy Cat into its "Official Spokescat" (and indeed flew her by first class to the Southwest Interactive event and provided a private hotel room), while General Mills used her in advertisements for its Honey Nut Cheerios cereal product. Not to outdone, several best-selling books were published "under her name". In addition, she became the focus of a film documentary and the basis for a well-received 2014 movie, "Grumpy Cat's Worst Christmas Ever".

In parallel, a broad merchandising program was put into place (one report indicated 900 such items for sale), based on her facial likeness and name. Products included stuffed animals, t-shirts, mugs, wall calendars, and such digital offerings as a video game and weather app. All of this commercial activity was anchored by various registrations for the wordmark "Grumpy Cat." No official revenue figures were apparently ever published, but estimates run as high as $100 million.

We now circle back to the comment made by this Kat’s young one in connection with the meteoric commercial success of Grumpy Cat. The principal, almost primordial, driver of the success of Grumpy Cat was the engagement of social media in the posting and sharing of her initial picture and caption, followed by its wide-spread adoption in the internet meme space. This is the stuff of media studies and cultural transmission, where an amorphous social media community, in spreading the picture and name for free, created the foundation for commercial success by others, first for the cat’s owner and immediate family and then radiating out to other persons.

As for the ensuing commercial success, we discern a combination of traditional IP rights interwoven with ersatz forms of protection (appropriate for someone who is a member of the domesticated animal kingdom). At the heart of traditional IP is the mark “Grumpy Cat”, which serves as the linchpin for the branding of the various goods and services. The picture of the Grumpy Cat may be the initial draw, but it is the name and mark with which we connect commercially. Such exploitation of the name and mark is “Branding 101”, reminding us just how powerful a brand may be in exploiting the community around which the picture, meme and ultimately the name and mark coalesce. 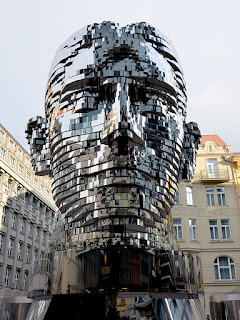 various media and other events, anchored in contract and redounding to the monetary benefit for her owners and others.

Interestingly, there is little evidence of traditional IP enforcement. Indeed, in what appears to be the only reported case in which rights in the Grumpy Cat name and likeness was asserted in court, the context was a licensee that went beyond the scope of the license, leaving it open to attack on both trademark and copyright grounds. The owner of Grumpy Cat was awarded the amount of $710,000.

So what about the unauthorized exploitation of IP that so occupied this Kat's son? Does it mean that what he thought were acts of infringement was rather conduct which the IP system does not reach? Or, rather, does it point to a cost-benefit analysis regarding the policing of infringement, where legal intervention was found justified only in an isolated incident?

Whatever the answer, this Kat cannot conclude without the following thoughts. What does the story of Grumpy Cat say about us in that feline dwarfism and underbite grab the visual fancy of a large community of admirers? Even more, what does it say about us that the visual outcome of these defects become the basis for successful commercialization? And even more, did Grumpy Cat ultimately benefit by a lifestyle better suited for the likes of Claudia Schiffer?

Photo on right by Gage Skidmore and is licensed under Creative Commons Attribution-Share Alike 3.0 Unported license.

Photo on left by Jindrich Nosek and is licensed under Creative Commons Attribution-Share Alike 4.0 International license.

By Neil Wilkof
In memoriam Grumpy Cat: IP and beyond

Reviewed by Neil Wilkof on Tuesday, May 28, 2019 Rating: 5
The IPKat licenses the use of its blog posts under a Creative Commons Attribution-Non Commercial Licence.