Peter Ling Tuesday, August 20, 2019 - #IPKat, Article 14 EUTMR, Audi, EU trade marks, radiator grille, spare parts
If you picture an Audi, you likely imagine some type of car with four interlocking rings on the radiator grille [a symbol of the merger of the four automobile manufacturers Audi, DKW, Horch and Wanderer in 1932]. It is thus safe to assume that a radiator grille built for an Audi is expected to have a space where the four-ring shaped logo can be fitted. Spare part manufacturers who thought that, say, a four-ring shaped space is ideally suited to be fitted with a four-ring shaped logo, have just been told by the German Federal Court of Justice to try harder, as the shape of the mounting fixture can amount to trademark infringement (case I ZR 61/18).

This story, like so many stories that have shaped trademark law in recent times, starts on Ebay. The Defendant was selling a radiator grille for the Audi A6. The radiator grille was sold without the four-ring Audi logo (protected by the EU trademark 000018762), but with a mounting fixture intended to receive this logo.

The fixture on the Ebay page looked like this: 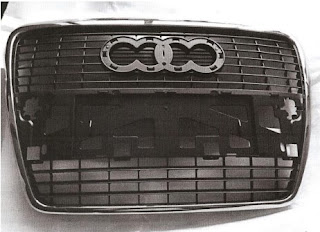 Upon being contacted by Audi, the seller signed a cease-and-desist declaration, by which it undertook not to distribute this grille in the future. However, the seller apparently refused to disclose its sales figures or any other information that Audi could have used to calculate its claim to financial compensation. Audi thus successfully sued the seller for infringement both in first and second instance. The seller then appealed to the Federal Court of Justice.

The seller argued, among other things, that Audi could not enforce its rights when the use of its trade mark is necessary to indicate the intended purpose of a product or service "in particular as accessories or spare parts" (now Art. 14(1)(c) EUTMR).

First, the Federal Court of Justice explicitly acknowledges that the four-ring shape on the radiator grille is similar to Audi’s trade mark and that it serves as a mounting fixture of the Audi logo.

Thus, whether a specific use is covered by the exception under Art. 14(1)(c) EUTMR depends upon whether the use is necessary to indicate the intended purpose of the product or service. The specific use must represent the “only possible means of providing the public with comprehensible and complete information on the intended purpose of the goods or service”. Any other way of communicating the same information to the public must be practically excluded (see CJEU C-63/97, para. 60 – BMW/Deenik).

In the Court’s view,

“there are means other than the use of the logo on the radiator grille to inform the targeted public that this is a spare part for the applicant’s vehicles. For example, the defendant could have said so in the text of the Internet offer or […] included this information in the text of the delivery note”

The purpose of Art. 14 EUTMR is to create a balance between the interest of trade mark owners, on the one hand, and the public interest in the free movement of goods and services in the EU, on the other hand. This provision prevents the trade mark owner from securing an exclusive position on the spare parts market while, at the same time, preventing third party manufacturers of spare parts from unduly profiting on the basis of the goodwill of the manufacturer’s trade mark.

Customers expect that the spare part of a third-party manufacturer will look the same as those made by the original equipment manufacturer. Thus, a radiator grille for an Audi must have a space where the Audi logo can be affixed. However, in the case at hand, the appellant has not argued that the specific form of the mounting fixture is necessary to make look the radiator grille identical to a grille manufactured by Audi. The Audi logo could therefore be affixed onto a mounting fixture that does not look like the four-ring emblem.

Whether the specific form of the mounting fixture is “necessary” to indicate the intended purpose of the radiator grille is a question of fact, which had already been decided by the lower court in the negative. The appellant could not dispute this finding, since questions of fact are in principle excluded from the review of the Federal Court of Justice. Once the finding was made that the form of the mounting fixture was not “necessary”, the case became very difficult to win for the spare part manufacturer.

Another aspect of the case is, however, more surprising. The Court had no hesitation in finding that the general public would see the shape of the mounting fixture (also) as an indication of the origin of the radiator grille. But is this actually correct?

Reviewed by Peter Ling on Tuesday, August 20, 2019 Rating: 5
The IPKat licenses the use of its blog posts under a Creative Commons Attribution-Non Commercial Licence.