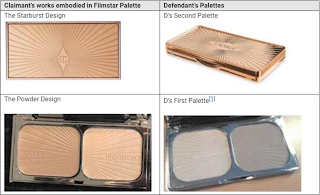 Lookalike products pose a concern for many a famous brand, and many forms of legal action may be brought in efforts to quell this, from trade mark infringement to passing off and, also, copyright infringement. When it comes to makeup palettes, pursuit of a copyright infringement claim may be indeed a promising way to go, following Islestarr Holdings Ltd v Aldi Stores Ltd, heard under the Shorter Trials Scheme in the High Court of England and Wales (Business and Property Courts).


In this case, Charlotte Tilbury successfully proved copyright infringement of 2 artistic works by Aldi: first, their ‘Starburst design’, which decorated the lid of the package containing two makeup powders; and the ‘Powder design', embossed into the separate makeup powders in the package (pictured).


The 'Charlotte Tilbury' makeup brand was launched by Islestarr in 2013, with packaging designs made by design company ‘Made Thought Limited’. This included designs for the ‘Filmstar Bronze and Glow’ palette, which was sold for £49 and made £12.9 million in sales over five and a half years.


On the 25th July 2018, Islestarr became aware of the interior of Aldi’s palette at a trade show and the similarities it bore to their own palette. Copyright infringement was alleged, however action was only pursued on 21st November 2018, following Islestarr’s subsequent discovery of the lid of Aldi’s palette, also bearing similarities. Before its removal from sale, Aldi’s palette had retailed for £6.99 (later reduced to £4.99) and had made £140,000 in sales.

Before dealing with the main questions raised, Deputy Master Linwood addressed whether copyright could subsist in a powder design, which would disappear following use of the product.

The applicability of Merchandising Corporation of America Inc v Harpbond Ltd [1983] FSR 32 was raised, where it was found that the facial makeup of Adam Ant was not protectable as it was not fixed in a tangible medium, and could be washed off.

However, this was dismissed in favour of Abraham Moon and Sons v Thornber [2012] EWPCC 37 (concerning the composition of a woollen plaid fabric, reported by The 1709 Blog here).

Originality - was the work original in the first place?


It is set out under Infopaq International A/S v Danske Dagblades Forening [2010] FSR 20 that originality requires the author’s own intellectual creation or independent skill and effort. This has been similarly reflected in Sawkins v Hyperion [2005] EWCA Civ 565, where it was set out by Mummery LJ that:

a work need only be ‘original’ in the limited sense that the author originated it by his efforts rather than slavishly copying it from the work produced by the efforts of another person.

It had been identified that the main creators of the Works had drawn inspiration from art deco, and whilst the elements - when considered individually - were generic, the Works as a whole were original due to an absence of ‘slavish copying’. Thus, copyright protection would subsist.


In UK law, the determination of copyright infringement is set out under the seminal case of Designers Guild Ltd v Russell Williams (Textiles Limited) [2001] FSR 11, where it was set out that:


the court must undertake a visual comparison of the two designs noting the similarities and the differences. The purpose... [being] to judge whether the particular similarities are relied on are sufficiently close, numerous or extensive to be more likely to be the result of copying rather than of coincidence.

Drawing on this test, Deputy Master Linwood found that the similarities were substantial, from a quantitative as well as a qualitative perspective. Thus, copyright infringement was established.

As well as illustrating the evidentiary difficulties of any copyright case (apparent from reading through the full judgment), the most interesting points arise around Deputy Master Linwood’s comments around fixation in copyright. As he sets out:

I am in no doubt that the design embossed into the powders can be subject to copyright protection in principle. Otherwise, artistic works by, for example, persons who make sculptures out of sand at low water on a tidal beach, which are then washed away, could have no claim to copyright in, say, a pre-construction sketch or photograph of the completed work. Likewise, I can see no reason why the creator of a bespoke wedding cake could not claim copyright in his or her work.

He thus emphasised the unique position of copyright in artistic work, in that they do not explicitly require permanence (unlike copyright in literary, dramatic or musical works, which doesn’t subsist until the work is recorded in writing or otherwise (s3(2) Copyright, Designs and Patents Act (CDPA) 1988). This has been suggested in case law as well - take Laddie J in Metix v Maughan [1997] FSR 718, at 721:

… I have difficulty in accepting… that something which has a mere transient existence cannot be a work of sculpture… a sculpture made form ice is no less a sculpture because it may melt as soon as the temperature rises.

In the present case, copyright was easily proven once drawings of the designs were produced. Even if the drawings were not present, copyright would nonetheless subsist in this artistic work - fixation would not be an issue here.

More often than not, subsistence of copyright protection will depend upon whether the Work seeking copyright protection is a ‘work’ at all (the CJEU case of Levola Hengelo, C-310/17 is an excellent example of this, see IPKat analysis here). For UK copyright law specifically, this will extend to whether the Work was 'of the right kind', as s1(1) of the CDPA 1988 sets out an exhaustive list of works in which copyright may subsist.

Finally, since this judgment was heard under the Shorter Trial (as opposed to the Intellectual Property Enterprise Courts, where there is an upper damage limit of £500,000), this could be a potentially pricey problem for makers of lookalike products of this kind …
Copyright protection granted to Charlotte Tilbury makeup powder case and design

Reviewed by Riana Harvey on Friday, August 16, 2019 Rating: 5
The IPKat licenses the use of its blog posts under a Creative Commons Attribution-Non Commercial Licence.