Alex Woolgar Tuesday, December 10, 2019 - #Brexit, #copyright infringement, conservatives, general election, love actually, Parody
Readers from outside of the UK political bubble (and who therefore might not yet be sick of UK politics) may be interested to know that (i) there is a general election on Thursday; and (ii) this election campaign has had more than its fair share of campaigning tactics that are dubious from an IP perspective.

It seems, however, that the best has been saved until last. The Conservatives have just released what may well be Boris Johnson's magnum opus, a film that has been dubbed "Brexit, Actually" online: 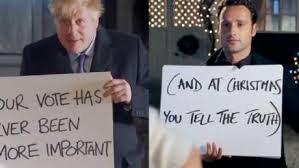 The film bears a striking resemblance to a well-known scene from Love, Actually, a film written by Richard Curtis (himself a high-profile campaigner and co-founder of Comic Relief). This resemblance is not coincidental, as acknowledged by the video description on YouTube: "Boris Johnson's funny election advert parodies Love Actually but makes an important point."

[Interestingly, this is the second campaign video for this election to evoke the same scene from Love, Actually. Labour candidate Dr Rosena Allin-Khan released a - less faithful - recreation a few weeks ago.]

It seems safe to assume that Brexit, Actually was not approved by Richard Curtis. To the extent that they are original, both the script and film of Love, Actually qualify for copyright protection in the UK as dramatic works within the scope of section 3(1) of the Copyright, Designs and Patents Act 1988 (CDPA). The works are capable of being performed and have the requisite certainty and unity.

Clearly, there has been copying of the scene. The question is whether what has been taken is a substantial part of Love Actually and/or constitutes the own intellectual creation (OIC) of Mr Curtis.

In contrast to Norowzian v Arks (in which the defendants' appropriation of the claimant's film was limited to the jump-cutting editing style and certain movements in a different order) there are several similarities between the relevant scene of Love, Actually and Brexit, Actually that go beyond the simple idea of conveying a message silently on a doorstep using cue cards. There are three identical lines in an identical order ("I'll get it"; "It's carol singers" (in response to a cue card reading: "Say it's carol singers"); and "Give them a quid and tell them to bugger off"). The background song, played via a now largely obsolete portable stereo, is the same (Silent Night). Some of the cards are the same or similar ("It's carol singers"; "With any luck, by next year"; "But for now let me say"; "Until I/you look like this"). To the author, we are entering the territory of expression of an idea/OIC rather than an idea per se (notwithstanding that the relevant elements make up only a small part of Love, Actually, as a whole), assuming that the relevant elements are original.

To this GuestKat, the Conservatives' purported defence of parody is flimsy. From Deckmyn, we know that to qualify as a permitted act of parody under section 30A(1) CDPA, the use of a copyright work must (i) be for the purpose of parody; and (ii) fair dealing. Parody is an autonomous concept of EU law, the essential characteristics of which are "first, to evoke an existing work while being noticeably different from it, and, secondly, to constitute an expression of humour or mockery". While Brexit, Actually arguably meets these criteria, in this GuestKat's view there is a fundamental problem: the film has been made for the purpose of making a political point, and the parody element is an incidental, or secondary, purpose.

There is no UK authority on parody under section 30A, but based on the CJEU jurisprudence it seems to this GuestKat that the Conservative Party would be in all sorts of trouble were it to face a copyright infringement claim. There would also be important arguments in relation to fair dealing, such as whether Brexit, Actually amounts to a derogatory treatment of the original work, whether acknowledgement is necessary (and, if so, whether sufficient acknowledgement has been given), etc..

It will be interesting to watch whether any legal action results from Brexit, Actually. Arguably, the horse has already bolted in this case. But that has not stopped authors from taking action in the past, particularly if motivated by matters of principle.

Reviewed by Alex Woolgar on Tuesday, December 10, 2019 Rating: 5
The IPKat licenses the use of its blog posts under a Creative Commons Attribution-Non Commercial Licence.