The use, by the defendants, of his name on a jersey (below) worn by a model during a fashion show held in Naples in 2009 [Maradona played for Napoli for a few years, and in that city he reached the peak of his career]. The jersey, which was sold neither before nor after the show, carried the number ‘10’, ie the same number used by Maradona while at Napoli, and had the same colour combination as Napoli jerseys. Images of the jersey appeared on general interest media and also on the Dolce&Gabbana website. 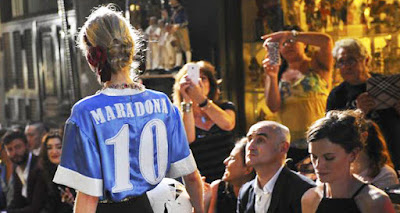 Maradona sued and claimed damages for EUR 1 million (!) due to the unauthorized commercial exploitation of his name. He submitted that Dolce&Gabbana’s use of his name had allowed them to take an unfair advantage of his repute and also likely misled the public into believing that there would be a commercial partnership between himself and the defendants.

News has reached The IPKat that now the Milan Court of First Instance has issued its decision on the matter, finding in favour of Maradona. The court noted that [the translation from Italian is mine]:

Without any doubt, the use of a decorative element which reproduces a third-party distinctive sign or name, leads – to say the least – to the establishment of an association with that person. If the sign is well-known, also and above all in a non-commercial sector, and conveys - like the sign at issue - particular impressions of historical allure and football excellence, it cannot be freely used by third-party undertakings without the permission of the rightholder.

To this end, the court referred to Article 8 of the Italian Industrial Property Code, which expressly concerns trade mark registration of third parties’ own image, names and well-known signs, to draw the broader teaching that such provision is aimed at reserving the exploitation of the relevant ‘allure’ of a name or sign to its owner, who can then repress any third-party free-riding of their own repute. According to the court, this provision ‘fully legitimizes merchandising, which allows the rightholder to capitalize on the competitive advantages that are inherent to their sign’.

In conclusion, according to the court the use made by Dolce&Gabbana of Maradona’s name was aimed at misappropriating the prestigious sport history of the latter.

As regards the damages, the fact that Dolce&Gabbana had not put the jerseys on sale was considered relevant. The determination of the damage was done based on endorsement deals concluded by Maradona. The court awarded damages for a little less than what the claimant had requested, ie EUR 70,000.

It is well-known that image rights protection in Italy is quite extensive, and courts have issued decisions that have progressively broadened the scope of protection afforded to one's own image, name, likeness, voice, etc.

Yet, decisions like the Maradona one increasingly show how the line between misappropriation/free riding and cultural tribute is quite a thin one.

In the case of Maradona, the expansive reading of Article 8 of the Code served the purpose of establishing a violation of Maradona's image (or rather: name) rights.

Yet, contrary to the court's reasoning, the context in which the use took place does not necessarily appear to be one in which the end-goal of Dolce&Gabbana was that of free riding on the footballer's own sport history or suggest a partnership between them.

Rather, the fact that his name was used on a fashionable version of Maradona's own Napoli jersey is indicative of the fact that the intention was to celebrate some of the symbols of Naples as a city, including its historically relevant sports people.

All this said, the take-home point seems to be once again that image rights can go quite far in Italy and that unauthorized use of third-party image, likeness, etc should be done - and handled - with care.
Maradona successfully sues Dolce&Gabbana over unauthorized use of his name on a jersey

Reviewed by Eleonora Rosati on Wednesday, December 18, 2019 Rating: 5
The IPKat licenses the use of its blog posts under a Creative Commons Attribution-Non Commercial Licence.