Monsanto fail to round up any infringers

David Pearce Saturday, October 13, 2007 - GM technology, monsanto, patents, patents court
The Honourable Mr Justice Pumfrey issued his ruling this week in the case of Monsanto Technology LLC v Cargill International SA.This was a patent dispute over whether Cargill could import GM soya meal into the UK from Argentina. Monsanto, developers of GM soya, said they couldn’t. Cargill claimed that they could, and that in any case the patent was invalid. 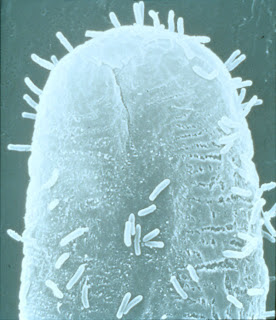 The invention in question related to particular enzyme synthases able to confer resistance to glyphosate herbicide (commonly known by the Monsanto-owned trade mark Roundup), but which maintained normal activity of the enzyme and plant metabolism. Transgenic plants had been produced by Monsanto that contained DNA coding for the enzyme. The transgenic plants were produced by incorporating particular DNA sequences in the plant's genome, the sequences derived from bacteria found to have the required property (one of them being agrobacterium tumefaciens, pictured right clinging on to a plant cell).

The patent, EP0546090, had previously been the subject of much controversy, and had already been the target of anti-GM groups. The patent was opposed by Greenpeace after being granted by the European Patent Office in 1996. The proceedings ended in an appeal (T 179/01) at the EPO, from which Monsanto emerged in 2005 with their patent largely intact, but with certain provisos and an interpretation on the patent that would become important in this case.

(left: plants growing on some of the 90% of total US soybean acreage dedicated to GM soybeans, according to Monsanto)

The claimed invention included: an isolated (i.e. exogenous, or separated from its original bacterial source) DNA sequence having the property of encoding for the desired enzyme; a recombinant DNA molecule having particular features conferring glyphosate tolerance of a plant cell; and (crucially) a glyphosate-tolerant plant cell having the particular DNA molecule. A method of producing glyphosate tolerant plants was also claimed, which included the step of inserting the recombinant DNA molecule into the genome of a plant cell.

The first question raised the issue of whether the soybean meal could be termed to be a product obtained directly from the claimed method, according to the requirements of section 60(1)(c). According to Pioneer v Warner [1997] RPC 759, such a product would no longer be infringing a method claim if the product of the claim had “lost its identity”. Since the claimed method only resulted in the production of a plant cell the alleged infringing product, although it might be derived from plants being lineal descendants of an original modified plant, could not be seen as being a direct product of the process. To argue otherwise, as Monsanto attempted, would in Mr Justice Pumfrey's view be to confuse the informational content of what passed between the generations with the product itself, which was just soybean meal with no special intrinsic characteristics from one of the generations of plants.

The second question related to whether the processed soybeans, which had been subjected to many and varied processing steps including mechanical, solvent and steam processing, could possibly still contain any of the claimed DNA sequences. Monsanto, having carried out extensive experiments, proved to the judge’s satisfaction that it did contain some relevant DNA.

On construing the claims, however, it was found that the particular type of DNA that would have to be present according to the claims did not match what was found. The claim construction Pumfrey J arrived at, which was supported by the interpretation given to the claims by the EPO board of appeal, prevented Monsanto from arguing that the patent had a broad enough scope to cover the product. Monsanto appeared to be caught in a classic patent 'squeeze', between having to argue for a scope broad enough to cover the alleged infringement but without causing the patent to be invalid as a result through either covering the prior art or becoming obvious in light of it.

In the end Pumfrey J, having skilfully managing to wade through a huge amount of technical detail (which the IPKat has attempted to steer a careful path through), concluded that although the patent was valid, there was no infringement.

The IPKat wonders what possible worth the patent could now be, given that it appears to be unenforceable against the vast majority of GM soya grown. Could they have just picked the wrong ship? Or perhaps one could take the view that its main worth has been in providing for the legal professionals it has kept employed for the past sixteen years.

More about Argentinian GM soya here, here and here. Not all good news, it would appear.
Monsanto fail to round up any infringers

Reviewed by David Pearce on Saturday, October 13, 2007 Rating: 5
The IPKat licenses the use of its blog posts under a Creative Commons Attribution-Non Commercial Licence.