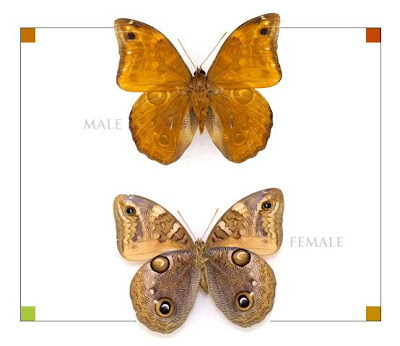 The IPKat has read with great interest a news item, via Conservation Commons, about how researchers who helped discover a new species of Mexican butterfly are offering to sell the naming rights in order to raise money to fund more research. It is hoped that at least US$50,000 will be raised by auctioning off the rights to name the 4-inch "owl eye" butterfly, which lives in Sonora, a Mexican state bordering Arizona.

Right: the butterfly in question (male, above, and female, below)

"According to the scientific tradition, discoverers of a new species have the say in naming it. In recent years, some discoverers have auctioned off their naming rights to raise money.

... naming rights for a new monkey species brought in US$650,000 two years ago. A group of 10 new fish species that went on the naming auction block at the same time earlier this year brought in a total of US$2 million".

The auction, on the internet auction site Igavel.com, closes this Friday, 2 November. When this item was posted, the bidding was only up to US$6,250 -- so here's a golden opportunity for everlasting fame and gold-plated conservation credentials. 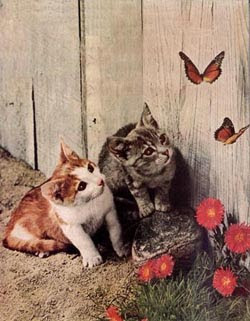 Merpel says, whoa there! Things aren't so easy, especially for those of us who are intellectually proprietorily inclined. How about some answers to the following questions?

* What is the legal basis upon which the discoverer of a new butterfly species can sell the naming rights? Is this right exclusive and irrevocable, or can it be challenged by the subsequent disclosure that the butterfly was previously found by a third party, who also wishes to sell naming rights?

Left: the IPKat and Merpel ponder how to distinguish the little girl butterfly from the little boy butterfly ... (cyber-cats)

* Is the denomination of a butterfly a "use" of the name for the purpose of acquiring distinctiveness as a trade mark, for demonstrating genuine use of that mark or for infringing another's mark?

* Is there a register of butterfly names? Does it protect against duplication of names?

* What would happen to anyone who used the words (i) Champagne or (ii) London Olympics 2012 in the butterfly's name?

* do the naming rights confer any entitlement to the genetic make-up of the butterfly or to any chemical compounds that may be extracted from it?

* what about the caterpillar?

Cousin Caterpillar here (in this blogger's opinion, one of the greatest songs ever written/performed)
Caterpillar recipes here
Worth a flutter?

Reviewed by Jeremy on Tuesday, October 30, 2007 Rating: 5
The IPKat licenses the use of its blog posts under a Creative Commons Attribution-Non Commercial Licence.