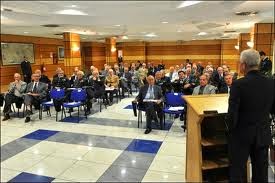 MAPPING is the acronym of Managing Alternatives for Privacy, Property and Internet Governance [Merpel prefers MAPPIG], a project funded by the European Commission to draw together people from different strands of life within the information sectors and allow them to discuss their differences and points of common interest. For two whole days, 20 and 21 May, over 100 invitees participated in an Extraordinary General Assembly in Rome's lovely Casa dell'Aviatore (suits and ties mandatory!) -- this Kat being among the small number of IP folk among the privacy and data protectionists, surveillance experts, internetters, governance folk and so on. This Assembly was intended to be something of a kick-start to the project and, while invitation-only, is seen as a means of identifying and inviting others to participate in what will be a four-year project.

The list of invitees (excepting this blogger, who is not qualified to comment on himself) was pretty impressive. If the EU had four corners, they could all be said to be represented, as were Europe's non-terrestrial territories. Invitees were also spotted from points beyond the EU, not excluding the United States.

The opening session contained the usual welcomes and explanations as to what everyone was doing here. Several minutes into this session, we were told that the Assembly was to be conducted under the Chatham House Rule, which this Kat is increasingly coming to regard as an impertinence where public money is being spent on bringing together quantities of people for a meeting at which most if not all are either repeating the positions of their employers or saying things that they have already published in print or on the internet. Merpel for once agrees, since it seems to her that the Rule is often apparently invoked as a means of making people at meetings governed by it feel more important in that they are invited to believe that they are hearing things that are so sensitive that they can't be attributed.

Be that as it may, an unnamed speaker at the opening session observed that there are two Europes -- one of the 28 Member States and another, wider one that is the Council of Europe. The latter has taken a lead in setting norms for 48 nations, particularly in the field of human rights, internet governance and cyber-crime, where its positions, agreements and judicial law-making have proved highly influential both in Europe and in over 100 countries worldwide where it has assisted in capacity-building. Interesting -- and worth a closer look.
MAPPING Europe's future: a Roman convocation

Reviewed by Jeremy on Tuesday, May 20, 2014 Rating: 5
The IPKat licenses the use of its blog posts under a Creative Commons Attribution-Non Commercial Licence.