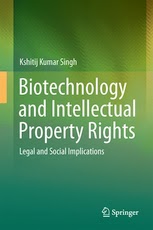 Most often, the IPKat and his friends only publish short notes on IP publications, letting readers know of their existence, making some general comments and hoping that they will form their own opinions. But every so often they have the luxury of being able to post a longer, more carefully considered review. Here the Kats host one such review from Katfriend Suleman Ali (Holly IP). The book in question is Biotechnology and Intellectual Property Rights. Legal and Social Implications, by Kshitij Kumar Singh. As the title suggests, this is an important and timely topic. But does the book live up to its title? This is what Suleman has to say:


This book describes itself as providing insights into ‘the interface between law and genetics’. The author, Kshitij Kumar Singh, is an Assistant Professor at the Amity Law School in Noida, India.

The author has the very laudable aims of trying to convey the ethical and economic issues around patenting biotechnology and the ownership of human genetic resources. However he does not succeed. The informed reader would find this book irritating for being incomplete, failing to get to grips with the issues and providing no fresh thinking. While the author provides a sympathetic perspective to those that might be seen as being harmed by the patent system this is undermined by the polemical nature of the book. On important issues only one side of the argument is presented, and at times the book simply reads like a list of complaints against the patent system, without a proper assessment of the available solutions.

Practitioners will find little of direct interest here because this book is about ‘issues’ and not ‘how to patent biotechnology’, and so its content is more suited to policy-makers and academics. The book starts with looking at the patentability criteria for biotech inventions in the US, Europe, Canada and India, with brief discussions of the important cases which established that most biotech inventions are patentable. The author goes on to describe TRIPS and the well-known issues of the anticommons, patent thickets and the Myriad patents which are being used to prevent other companies developing the same diagnostic test for breast cancer susceptibility. Using database rights to protect DNA sequences is discussed and whether open source is appropriate for biotech. The implications of ‘ownership’ of human genetic sequences is presented as an important issue.

This book is badly written. Much more proof-reading and editing needed to be done to improve the language and reduce the level of repetition. A stray paragraph on the need to file sequence listings in Canada gives the impression that of a lot of the content coming from copying and pasting. However, a more serious criticism is that the writing is unfocused and nebulous. A lot of the time one wonders what the real problem is that the author is discussing and who the actual victims are of the policy.

There is an assumption running through the book that the developing world is being harmed by the patent system. However it is not clear exactly how. Important developing world issues like agricultural innovation and technology transfer are not mentioned. Open source innovation is presented as potentially beneficial to the developing world without any explanation of why. It could be argued that there no viable alternative for developing biotech industries other than one based on patents. This central point is not discussed by the author in any meaningful way. Failure to mention the Trans-Pacific Partnership is a glaring omission. India is occasionally mentioned, but the opportunity to discuss how India is acting to protect its national interests in the field of IP is missed.

Unfortunately the book is very much out of date when it comes to the US. It does not cover the Guidance issued by the USPTO in March of 2014 on eligible matter in view of the Myriad and Mayo Supreme Court cases (recently replaced with the new Guidance issued in December of 2014). The Guidance makes fundamental changes to what is patentable in the field of biotech inventions.

The author focuses on the patenting and ownership of human genetic material, but never explains why this is different from patenting other inventions. The patent system is described as being inadequate for dealing with biotech inventions, without proper discussion of why. The author does not explain what the real problem is. Is biotech research being inhibited by patents with claims which are too broad? Are drugs too expensive as a consequence? These issues are hinted at but not properly discussed.

The ethical and economic issues raised by the patent system are complex. So they need complex thinking for solutions to emerge. Unfortunately this book does not tackle, or even describe, those issues adequately enough to provide insights or solutions. It therefore makes little contribution to the debate of how the patent system should be changed.

This Kat hopes that the author will rise to the challenge of addressing the issues raised by Suleman. The arguments against patent protection, like the arguments in favour of it, are so important that they deserve to be put at their strongest and to be substantiated as far as possible by any available evidence. Only once the arguments on each side are clarified and strengthened can a meaningful debate begin.
Biotechnology and Intellectual Property Rights: a book review

Reviewed by Jeremy on Sunday, December 28, 2014 Rating: 5
The IPKat licenses the use of its blog posts under a Creative Commons Attribution-Non Commercial Licence.