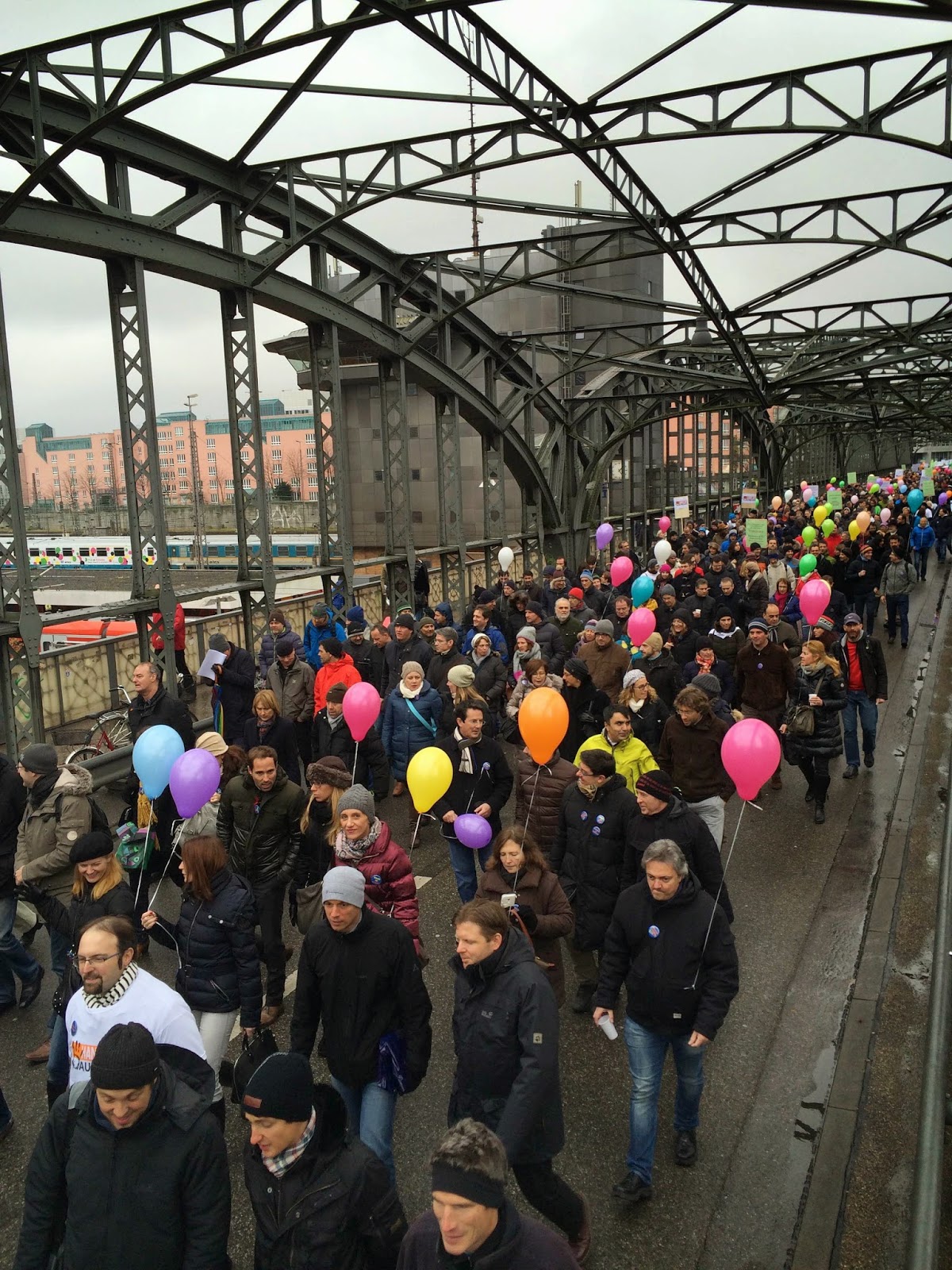 Merpel reported yesterday on the demonstration at the European Patent Office, with some recently received photographs.  The post attracted lots of comments.  Some -- whose content appeared to suggest that they were written by disgruntled examiners -- were in English so poor that Merpel thinks that they could not possibly have been (or were they cunningly disguised?)  In the meantime, there has been further eyewitness reporting on the FOSS Patents blog, which also refers to a report of a complaint from the staff union that the EPO allegedly pays for health insurance of members of the Administrative Council.  This is the body (composed of representatives from the national patent office of each contracting state) which is supposed to exercise oversight over the EPO.  That report also suggests, strikingly, that even Board of Appeal members joined in the demonstration.

The topic bears revisiting, in particular in relation to four questions that Merpel and the IPKat have been pondering.

(1) What happened about Oral Proceedings?

When reporting the previous strike action at the EPO, Merpel noted that "Apparently EPO staff are under instruction not to impede Oral Proceedings and involved Examiners are not to strike".  This time, the issue of Oral Proceedings appears to have been highly contentious.  SUEPO, the EPO Union for members in Germany, published a notice (link here - see entry on 19 November) reporting letters that had been sent to Representatives, advising:


to save the applicants unnecessary additional costs and inconvenience, SUEPO recommends that you ask for a postponement of the Oral Proceedings if any are scheduled on one of the above mentioned strike days.

The EPO responded, in a notice that Merpel has seen, and believes was published at THIS URL, but which now appears strangely to have vanished, stating that Oral Proceedings would - well - proceed - as scheduled, and representatives were expected to turn up (unless of course they had opted for Video Conference).  Merpel recalls (but is open to correction by anyone who has a record of the deleted notice) that the EPO's response made reference to a "minority" of employees taking strike action.  But the notice clearly suggested that Examiners could be requisitioned, for example for the Oral Proceedings that the EPO was guaranteeing would proceed, in which case not everyone was free to strike.

The IPKat and Merpel would like to know this: were EPO employees all free to strike?  If not, who could be compelled not to, and for what reasons?

(2) How many EPO employees went on strike?

The actual strike numbers are disputed.  This is true in the case of every situation of industrial action that Merpel can remember.  The EPO has written as follows (Merpel takes the precaution of reproducing the entire text in case this likewise disappears, or becomes altered):


A current industrial dispute involving strike action at the European Patent Office (EPO) has been the subject of some recent public comment.

Some of them have chosen to do so on a number of days in November and December for reasons which reflect opposition to all reforms implemented in recent years and in particular to the project to create a performance-based career system.

The European Patent Office regrets the unnecessary disturbance caused by these actions, but once again reassures the public that all measures to ensure the normal functioning of the Office are in place and that services to users remain unaffected.

Note again the suggestion here that the EPO can take "measures" to ensure the normal functioning of the Office.  Does this include preventing those who wish to join the strike from doing so?

In any case, SUEPO disputes those figures and suggests the true numbers for 20 November are closer to 3,000; Merpel heard a report that the Pschorrhöfe buildings (one of the EPO sites in Munich, where most first-instance examination takes place) were nearly empty.  These figures have also been commented on in this post from WIPR.

(3) How many participated in the demonstration?

In the events organised yesterday, there were two separate demonstrations, one in Germany and one in the Netherlands.

In the Netherlands, EPO staff demonstrated in front of the French Embassy in The Hague and then marched to the Danish Embassy.  These demonstrations were in particular to support their two colleagues, respectively French and Danish, who Merpel has been informed are facing disciplinary procedures for their work as staff representatives (in pleasing symmetry, the EPO and the Administrative Council (AC), are respectively under the lead of French and Danish nationals: Mr Battistelli (EPO President) and Mr Kongstad (AC Chairman).)

In Germany, staff marched from the EPO Pschorrhöfe buildings in Munich to the local Palace of Justice.

Merpel assumes that the number of people actually demonstrating would be lower than the number on strike, since a person could refrain from work without attending the demonstrations.  WIPR reports the number demonstrating as "close to 2,000"; Merpel has heard estimates in Munich as from 1,100 (apparently the police estimate) to 1,400 (the organisers' estimate). The numbers from the Hague are apparently around 600.

(4) How did it affect EPO operations?

Merpel wonders whether Oral Proceedings did go ahead without incident, and whether there was any other impairment of the functioning that was apparent to applicants or their representatives.  Do send comments if you have any experience.

More strikes are planned today, tomorrow, and as follows:


Merpel understands that the EPO staff unions are planning an escalating series of events, so look out for further demonstrations and other actions in the next couple of weeks.
Merpel revisits the EPO strike

Reviewed by Merpel on Wednesday, December 03, 2014 Rating: 5
The IPKat licenses the use of its blog posts under a Creative Commons Attribution-Non Commercial Licence.