Is house of mirrors a bad reflection on a famous artist? Post-mortem moral rights in Poland

Jeremy Thursday, December 04, 2014 - Cricoteka, Jeremy Phillips, moral rights, Poland, post-mortem moral rights
This post is kindly brought to you by Katfriend and enthusiastic young lawyer Ewa Laskowska, who has been inspired to write this piece by her interest in a curious episode in the ongoing saga of unharmonised moral rights in the New Europe of the 21st century.  This is what Ewa tells us:

What moral rights are and how many problems they cause has been the topic of many publications and posts (see e.g. here and here).  If you want further proof that this is so, just ask the Directorate of Cricoteka, Centre for the Documentation of the Art of Tadeusz Kantor in Kraków, Poland. 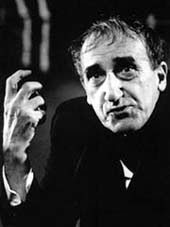 Tadeusz Kantor (right) is best known as an outstanding and original figure in 20th century theatre, and also as one of the most famous Polish painters and artists. One of his most famous works is an installation “Children at Their Desk” (click here and scroll down), an original work expressing the drama of World War II. This citizen of Kraków was however supposed to be an eccentric and ephemeral person. He never left a written will but, according to his (many) public statements, “his works should be entrusted to the City of Kraków, to be sure that they would not be destroyed or broken up (disorganised)”. In 1984 an independent expert commission estimated the value of his works at about 32 million PLN (about US$ 900,000). He also left one daughter and a wife, who were supposed to inherit 24 sculptures and installations, which are currently exhibited in the National Museum of Poland. To avoid problems arising from potential lawsuits, Tadeusz Kantor founded the Cricoteka – the Centre for the Documentation of the Art of Tadeusz Kantor.

In 2014 the Cricoteka paid for an architecturally original building which was supposed to be new Museum of Art and Life of Tadeusz Kantor. For an architecture layman like this blogger, it looks like a sort of upturned house, reflected in the mirrors which also are the roof of the upper storey. As the designers stated, its unusual appearance was not unlike a theatre scene when viewed from the distance.  It has to be seen to be appreciated:

Although it seems quite unusual and provocative to turn the building upside down, the daughter of the artist was not happy with it. She claimed that not only the building but also the exhibition (which, in her opinion, was rather poor), infringed the moral rights of her father.  As she has asserted, this is more a parody of her father’s work than a tribute to it.

The problem is that, according to the Polish Copyright Act 1994, moral rights are perpetual. After the death of the author, his spouse, children, parents, siblings or sibling’s children have the sole right to raise legitimate claims unless the author’s will was expressed to the contrary effect. In this case, Tadeusz Kantor may have stated that the economic rights to the particular works were to pass to the Cricoteka, but he left no post-mortem instruction concerning his moral rights or how to execute them.

To exacerbate the position, the Polish Copyright Act does not expressly state that the “right to good reputation of the work or style of the author” is a moral right. Rather, under Article 16 it lists the right of attribution of authorship, the right to the integrity of each specific work, the right to decide when to make the work available to the public for the first time and the right of supervision on the manner of using the work.  In the event, it had to be asked whether the upturned building expressed the art and style of the author and, in particular whether such a moral right is actually possible to exercise.  If it is, it must next be asked whether the semi-detached house with the additional modern-looking upper storey and mirrors to reflect it constitute an expression of the outstanding figure who was Tadeusz Kantor.


This blogger is not particularly convinced at the Cricoteka’s building is indeed an expression of the artist’s style and work. However, this episode does raise issues concerning harmonisation of moral rights within the European Union, which may be an increasingly desirable end to achieve in light of the recent Court of Justice ruling in Case C-201/13  Deckmyn -- see Eleonora's Katnote here).

Is house of mirrors a bad reflection on a famous artist? Post-mortem moral rights in Poland

Reviewed by Jeremy on Thursday, December 04, 2014 Rating: 5
The IPKat licenses the use of its blog posts under a Creative Commons Attribution-Non Commercial Licence.