The illusion of design and the design of illusion

When we think about designs, we usually focus on the visual. After all, designs are about the aesthetic qualities of objects. But there are times

when we can learn a lot about design by just considering the language used to describe it. Consider the piece written by Tim Gunn, a well-known fashion expert and former chief creative officer for then Liz Claiborne Inc. (now known as Kate Spade & Co,), entitled “Designers refuse to make clothes to fit American women: It’s a disgrace”, which was published by The Washington Post on September 8th. The thrust of Gunn’s article is that the fashion industry pays insufficient attention to what he calls women “larger than size 12.” He cites research that the average American woman wears between a size 16 and a size 18, and that over 100 million women wear a size larger than 12. And yet, not only do—


“… most designers max out at size 12, [but] the selection of plus-size items on offer at many retailers is paltry compared with what’s available for a size 2 woman. According to a Bloomberg analysis, only 8.5 percent of dresses on Nordstrom.com in May were plus-size. At J.C. Penny’s website, it was 16 percent; Nike.com had a mere five items—total.”

Make no mistake, we are talking about a large consumer segment. Over the last three years, this segment has increased spending on clothes at a pace greater than the “straight-size” segment. That might sound like a good thing, but in fact it only underscores that the fashion is doing a lousy business job in serving this clientele. Eighty percent of such women reported that they would spend more on clothing if there were more product choice in their size. Even a larger percentage, nearly 90%, stated that they would spend more on clothes “if they had trendier options.” Gunn poignantly recounts that at a fashion event that took place in 2010, one woman removed her jacket and described herself to Gunn as follows:


“Tim, look at me I’m a box on top, a big, square box. How I can dress this shape and not look like a fullback" [for non-U.S. readers, a fullback is a position in American football].

The upshot is that there exists a fashion segment that wants to buy more clothes suitable for them, but they are not able to do so because the products offered do not meet their needs and aspirations. So why? According to Gunn, the answer is that we have had a massive failure of design. He purports to rise to the challenge, declaring that—


"[t]here is no reason larger women can't look just as fabulous as other women. The key is the harmonious balance of silhouette, proportion and fit, regardless of size or shapes. Designs need to be reconceived, not just sized up; it's a matter of adjusting proportions. The textile changes, every seam changes. Done right, our clothing can create an optical illusion that helps us look taller and slimmer." 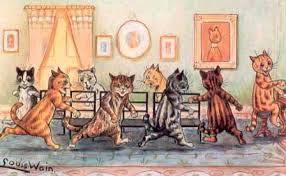 That sounds promising, until one thinks a bit about how fashion design is being described. Ostensibly, design is almost always only for the good; you can never get too much good design. “But what is a good fashion design?”, you ask. It is not a design that is merely aesthetic; after all, all designs have an aesthetic character. When it comes to good fashion, the most representative word that comes to mind is the term “sleek” or the equivalent, as the fashion models saunter down the catwalk. But Gunn is suggesting that we reformulate design to address the fashion needs of the larger than size 12 woman. If so, surely there must be corresponding vocabulary to describe this change.

Au contraire-- Gunn’s solution is merely a form of illusion. The language for his new approach to fashion design remains--"taller" and "slimmer”. All that has happened is that the language of the catwalk is applied to this "better" design of clothes for the "size 12 woman", aided and abetted by the illusion of design. Gunn’s language betrays a failure of design. The challenge is simply stated— “How can I look good and why do designers ignore me.” The solution offered would seem to be an illusion, in more ways than one.
The illusion of design and the design of illusion

Reviewed by Neil Wilkof on Monday, September 26, 2016 Rating: 5
The IPKat licenses the use of its blog posts under a Creative Commons Attribution-Non Commercial Licence.