History tells us periods of globalisation do not come smoothly. According to economic commentator Thomas Friedman, our current era of globalisation is new, unique, terrifying and exciting. As exciting as it is, such change can be disquieting and the spoils of globalisation are not equally distributed.  Against this new political and economic backdrop is a political reaction which, consciously or unconsciously, seeks to reverse this trend.  This idea of a policy reaction is the subject of a recent US Chamber of Commerce report, "Preventing Deglobalization: An Economic and Security Argument for Free Trade and Investment in ICT."

Friedman divides globalisation into three phases. The first, starting with the 'discovery' of the Americas, runs from 1492 to 1800, which he argues is the globalisation of countries. The second phase is from 1800 to 2000, a time dominated by the Industrial Revolution, in which companies become globalised. In our present era, from 2000, it is the individual who joins globalisation. Not everyone wins, and periods of increased globalisation are often followed by periods of political turmoil. The ICT sector is a dominant sector driving change in our current wave of globalisation.

The US Chamber of Commerce is concerned that, "some national governments, by intentionally or unintentionally defining security concerns in an overly broad manner, are applying intense pressure on the ICT sector to localize rather than globalize." Their report, written by economic, legal and policy consultants, argues regulations and laws are unduly, and ineffectively, burdening industry without achieving political goals, and with negative economic impact.  On the intellectual property side, the report argues this trend includes, "requirements that products contain intellectual property [be] developed domestically, supposedly to make them more secure." These IP requirements, in conjunction with standards, subsidies, competition laws and other levers, lead the Chamber to conclude:


As a result, non-security interests—e.g., economic protectionism and political control—are becoming increasingly intermingled with real security concerns, undermining the legitimacy of essential security oriented policies. Indeed, when governments commingle such interests, it makes it difficult to reject or refine any of their policies that are:
(i) justified on ostensible security concerns but actually based principally on industrial objectives, or
(ii) based on legitimate security interests but unnecessarily trade restrictive.
These trends raise serious economic risks to the global economy.

On IP, the Chamber recommends, "Security requirements should not require forced technology transfer or review of intellectual property (IP) such as source code. Such IP is business proprietary information that is essential to a company’ ability to innovate and remain economically competitive." As a principle, this seems prudent, however there are good reasons the EU Trade Secrets Directive includes caveats regarding free speech, whistle-blowers or mobility of employees. 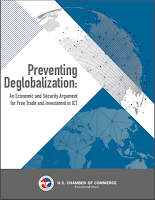 The arguments in the report are generally sound, but caveats on the economic analysis are, as is often the case, relegated to the last chapter. It is difficult to unpack the claim that, "If China continues to pursue deglobalization in the ICT sector, economic modeling based on data from the Global Trade Analysis Project and defined shocks to the baseline of Chinese economic data suggests an annual reduction in China’s GDP anywhere from 1.77–3.44%, or at least $200 billion based on 2015 GDP. By 2025, this would equate to a reduction in China’s GDP of—at a minimum—nearly $3 trillion annually." While it is likely that increased protectionism will not benefit the Chinese economy (although Japanese import restrictions/protectionism may have benefited that economy), the magnitude is debatable.

I would have liked to see more consideration of other aspects of globalisation. The report notes, without irony, "Many a Chinese farmer’s child went from agriculture and garment stitching directly into high-tech assembly over the past decades, and that has pushed down electronics unit costs and generally lifted wages lately in other segments, hence costs of production." And economists wonder why we have such a dismal reputation.

Essentially, the report argues for less regulation, including IP, in the ICT sector. Readers have been around long enough to know reports by interested parties generally report arguments which are in the interest of said parties.  As is always my take on government industrial policy, there is a balance to be struck.

See below for a clip of Friedman discussing globalisation.

Reviewed by Nicola Searle on Tuesday, September 13, 2016 Rating: 5
The IPKat licenses the use of its blog posts under a Creative Commons Attribution-Non Commercial Licence.