Former Katonomist, Nicola Searle, has devoted significant research attention as Senior Lecturer and Digital Economy Fellow at Goldsmiths, University of London, to the issue of trade secrets. She brings her insights to the issue of the closure by the U.S. government of the Chinese consulate in Houston.

With countries around the world furiously trying to develop COVID treatments and vaccines, and with the potential economic and health reward enormous, the race is on. Reports that malicious state actors (particularly Russian and Chinese actors) are targeting COVID research through economic espionage increasingly link national security to trade secrets. All of this has culminated in the announcement on Wednesday that the US has ordered China to close its Houston consulate.

The political push behind the 1996 enactment of the US Economic Espionage Act arose from the belief that Russian spies, unemployed after the end of the Cold War, were applying their wares to industrial and economic espionage. Rochelle Dreyfuss and Orly Lobel look at the rhetoric in their paper, “"Economic Espionage as Reality or Rhetoric: Equating Trade Secrecy with National Security”.

The closure of the Houston consulate stems from charges made public on Tuesday against Chinese nationals Li Xiaoyu and Dong Jiazhi (DOJ press release here). The duo is alleged to have targeted, from their base in China, multiple American companies and government agencies, including those engaged in COVID research. Citing the case as an example of a Chinese programme of espionage, in the name of protecting US innovation, the American government has closed the Chinese consulate in Houston.

This quote from said press release describes the US government’s position:

'China has now taken its place, alongside Russia, Iran and North Korea, in that shameful club of nations that provide a safe haven for cyber criminals in exchange for those criminals being ‘on call’ to work for the benefit of the state, here to feed the Chinese Communist party’s insatiable hunger for American and other non-Chinese companies’ hard-earned intellectual property, including COVID-19 research,' Assistant Attorney General for National Security John C. Demers.

As one of my IPKat colleagues observes, why the Houston consulate and not San Francisco? Both areas are research hubs, but San Francisco would seem to be more economically important, at least in connection with high tech. Houston might have relatively more military and energy research, not to speak of its nonpareil medical facilities, as compared to the tech focus of San Francisco, but it is unclear if that is a priority and the government has not clearly explained the choice of Houston. 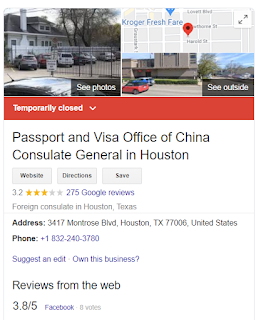 On the other hand, from a practical perspective, geography may be relatively unimportant as much trade secret theft is conducted via cyber means. It could be a shot across the bow, but equally the choice of the Houston consulate may involve domestic political considerations.

It is also difficult to separate the closure of the Chinese consulate from international relations. The US-Chinese relationship is increasingly contentious, and this development appears to be simply another in a long line. Chinese nationals account for a large portion of US federal prosecutions of trade secret theft.

Defendants with Chinese nationality are identified in at least 30% (59 of 202) of the cases in my database of all American federal trade secrets criminal cases (covering 1996-2018). Indeed, the number of publicly known prosecutions of Chinese nationals may likely be significantly lower than the number of cases the US government has actually identified, as other cases may not be made public due to national security issues or not be pursued for political/strategic reasons.

None of this is new, as nations have for a very long time ‘stolen’ IP from each other. Nations happily engage in economic espionage when they are still developing their economies, but their public stance changes once they develop enough knowledge to become targets themselves. The United States itself is known to have engaged in such activities as recently as 1995, here.

I have a very hard time believing that any nation with the resources to engage in economic espionage is not doing so. I would much rather see COVID research made freely available (e.g. the Open COVID Pledge), and, for other types of research and innovation, more investment in prevention of theft rather than for political prosecutions.

Reviewed by Neil Wilkof on Thursday, July 23, 2020 Rating: 5
The IPKat licenses the use of its blog posts under a Creative Commons Attribution-Non Commercial Licence.