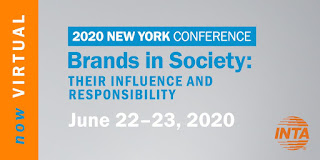 The International Trademark Association (INTA) held its first online conference, Brands in Society: Their Influence and Responsibility, on 22 and 23 June 2020. The two-day conference addressed diverse topics concerning the important role that brands play in society.

The TechieKat was pleased to be in attendance. Here is the first of her two reports on the conference.

The keynote on consumer trust was delivered by Jen Cohan (Edelman New York). Jen indicated that ethics are important for corporate trust. She noted that brands need to use the power to educate and inform through campaigns and implementation of policies. Jen held that when a public crisis occurs, brands may reinforce the brand’s leadership and trust by strengthening its bond with consumers. On the other hand, she underscored that consumers may walk away from a brand, depending on how the brand acts in such a crisis.

Session 1. A toolkit for success: what brand lawyers need to know 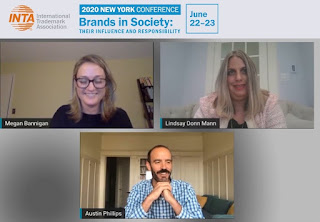 Megan Bannigan began by observing that trademark lawyers often deal with issues beyond trademarks per se.

In this context, Lindsay Donn Mann explained how campaigns on social media may involve inter alia trademarks, copyright, and right of publicity. So, she noted, a collaboration between the marketing and legal departments is important to convey the right message and avoid any legal issues. Interestingly, she recommended caution when sending C&Ds letters for copyright and trade dress infringement in the fashion field.

Austin Phillips observed that the clearances for marketing campaigns require coordination between different business teams (e.g. legal and commercial). He remarked that social media can help enhance trade dress when partnering with celebrities and influencers. Likewise, Austin provided some examples of campaigns on Instagram, including the shopping holiday one featuring Céline Dion, which advertised how users can shop directly from creators by clicking on the items tagged.

Session 2. Delivering your brand message during a social revolution

The second session was moderated by Kaydi Osowski (ViacomCBS). The speakers were Rick McMurtry (WarnerMedia) and Jamie Joyce (Rubenstein). 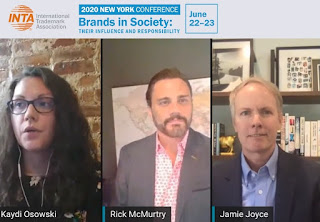 Kaydi Osowski highlighted that we are experiencing a social revolution in which more consumers are not choosing brands on the basis of availability and price but rather what a brand stands for, inter alia, in terms of sustainability, diversity, and fair employment policies.

Against this background, Rick McMurtry remarked that Warner was the first studio to have an inclusion and diversity policy. He detailed some events in which the company partnered with celebrities and the challenges involved. Rick also stressed that employees should bear in mind they are a reflection of the company in which they work when they are active on social media.

On the other hand, Jamie Joyce addressed some changes the brands have experienced over the last months (e.g., not having social media presence). He explained that considering that people are looking for new ways to socialize in the absence of physical events, it is the time to focus on digital advertising. However, Jamie indicated that the social revolution that we are experiencing is more a cultural movement than a marketing moment. So, he suggested participating in an authentic way.

Session 3. Marketing today: just because you can, should you? 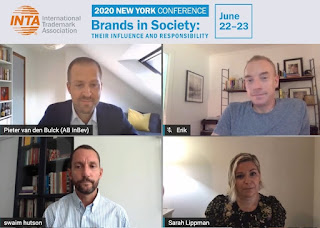 Pieter van den Bulck interviewed the speakers regarding partnerships with influencers. In this regard, Swaim Hutson shared his experience about the creation of the popular Instagram account The Academy New York, which is followed by famous designers, actresses and musicians. He also revealed how the brand expanded to subsidiary accounts that address inter alia art and music.

Erik Lavoie then discussed the shift of traditional advertisement to partnering with influencers. He also asserted the need to engage IP and/or legal teams with the creative departments in negotiations with influencers. Likewise, Sarah Lippman provided some observations regarding IP, ownership, and termination clauses when drafting agreements negotiated with influencers.

Daretia Austin reviewed some advertising campaigns of AT&T from 1979 to 2020 to show how they have switched in response to the circumstances. She remarked that the approach of the 2020 campaign focuses on how the company is committed to responding to the pandemic. 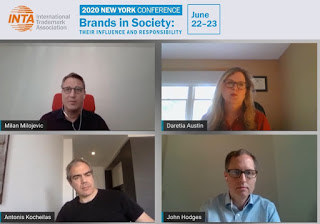 John Hodges commented that COVID-19 has had immediate and substantial impacts on public health, economies and BSR’s member companies. He said that the companies are focusing on sustainability goals for business purposes. John stated that sustainability (what a company is doing for society) can create brand loyalty.

Antonis Kocheilas then discussed the spirit of the Dove brand. He provided some examples of Dove’s campaigns, including the launch of “real beauty” campaign in 2004, the “pro-age” (not anti-age) campaign in 2008, and the company’s campaign as a response to COVID-19, in which real images of people who are at the front line in the fight against the pandemic are used.

Networking opportunities are always an important part of INTA’s events and this occasion was no exception. Speed networking, brand trivia, and topic rooms were part of the two breaks for networking which were held at the beginning and the halfway point of the conference.

Stay tuned for the second part of this report!

Credits:
The first image is from INTA's official account on LinkedIn.
The remaining pictures were taken by this TechieKat while attending the event.
[Event report] INTA’s first online conference. Brands in Society: Their Influence and Responsibility (Day 1)

Reviewed by Verónica Rodríguez Arguijo on Tuesday, July 14, 2020 Rating: 5
The IPKat licenses the use of its blog posts under a Creative Commons Attribution-Non Commercial Licence.