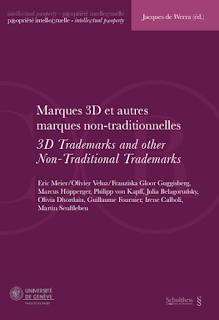 Trade mark laws across the globe are increasingly accepting various categories of “non-traditional” trade marks as eligible for registration and protection. Still, being a relatively new occurrence, a thoughtful analysis of these legal developments is lacking. To fill this gap, Prof. Jacques de Werra (University of Geneva, UNIGE) has recently published the edited volume “3D Trademarks and other Non-Traditional Trademarks” [for the UNIGE conference, which preceded this publication, read the IPKat’s event report here]. This publication is the 12th volume of the UNIGE’s books’ series on intellectual property [previous volumes, including those on geographical indications, trade secrets, design law, are available in open-access.]

This edited volume consists of eight chapters, written either in English or French, authored by practitioners, government officials, and renown academics. Due to such a variety of backgrounds, the book provides views which sometimes oppose each other, but in the aggregate offer complementary perspectives on the place of non-traditional trade marks in the legal systems of the EU, the US and Switzerland. Although no universal definition exists of what a “non-traditional trade mark” is (and a growing number of applications makes some more and more traditional), the volume covers such most common categories as 3D marks, position marks, sound marks, movement marks, shape marks and even scents.

The volume opens with Chapter 1, which is authored by Eric Meier, Olivier Veluz and Franziska Gloor Guggisberg (writing in French), all three high-ranking officials at the Swiss IPO. The authors take stock of the non-traditional trade mark in Switzerland, by addressing each of the requirements a trade mark application must fulfill under the Swiss law from the “non-traditional” perspective. The chapter includes a thorough analysis of existing practices and caselaw with regards to 3D trade marks, position marks, abstract colours, sound marks and movement marks. The authors recognise that most non-traditional marks have found only a limited place in the Swiss system: this, in their opinion, is due to the “graphical representation” requirement, still in force in Switzerland at the moment of writing.

Chapter 2 is written by Marcus Höpperger, a senior official at the WIPO, and deals with international developments on non-traditional trade marks. In a comprehensive, but concise manner the author addresses convergence efforts at WIPO, first as “soft law” Areas of Convergence for representation and description of non-traditional marks, and then as “hard” international law, such as by introducing necessary provisions in the Singapore Treaty on the Law of Trademarks. Still, no international consensus could be reached with regards to olfactory marks, tase marks, texture or feel marks, and the diverging national approaches to these categories of trade marks will resurface throughout the remaining chapters of the book.

Chapter 3 follows on with the institutional perspective: this time that of the EUIPO, coming from Philipp Von Kapff, member of the EUIPO First Board of Appeal. The author looks at EUIPO and CJEU practice concerning non-traditional trade marks after the entry into force of the EU trade mark reform. Regulation (EU) 2015/2424 no longer requires the sign to be represented graphically, which paved the way for applications for sound, multimedia and hologram marks, all addressed by the author in chapter 3. Mr. Von Kapff also looks at the absolute grounds for refusal applicable to shape marks in light of the new Regulation.

Chapter 4 addresses the developments from the other side of the pond: Julia Belagroudksy, a US-based intellectual property lawyer, discusses the protection of non-traditional trade marks under US law, including available case-law as to colour, sound or shape marks. Perhaps the most unusual category analysed (at least from the perspective of a European lawyer) is that of scent marks: the author looks into several trade mark applications for scents that have been successful at the USPTO.

Another contribution from the practitioner’s perspective is Chapter 5, authored by Olivia Dhordain, Deputy Chief IP Counsel at the Richemont Group, who discusses the relevance of non-traditional trade marks for the luxury industry. Using luxury items from several brands, which commonly reappear in litigation across jurisdictions, Mrs. Dhordain illustrates the importance of non-traditional trade marks, mostly 3D marks, for preserving what the author herself refers to as “luxury icons”.

In Chapter 6 (written in French), Guillaume Fournier, a Zurich-based lawyer, analyses procedural issues, related with the enforcement of non-traditional trade marks in Swiss courts. These insights on judicial practice are based on several cases, which resonated across jurisdictions, including the Nespresso coffee capsule and the Lego brick. In the opinion of the author, the procedural complexity of non-traditional trade marks calls for a specialised jurisdiction, as it is already the case for patents.

The volume closes with Chapter 8, authored by Prof. Martin Sentfleben, who addresses the growing tension between non-traditional trade marks and fundamental rights. The authors views the absolute grounds for refusal under the EU law, as potential gatekeepers, which serve to preserve the necessary balance between the interests of right holders and freedom of competition and expression.

Overall, this timely contribution will serve as an entry point into the complex issue of non-traditional trade marks for practitioners and academics alike. You can order it following the link here. Also note that IPKat readers are offered a 10% discount + Delivery (UE : CHF 10.00, other Countries CHF 20.00): for the discount, please contact Mr. Detraz at the following address patrick.detraz@schulthess.com.

Reviewed by Anastasiia Kyrylenko on Thursday, July 02, 2020 Rating: 5
The IPKat licenses the use of its blog posts under a Creative Commons Attribution-Non Commercial Licence.