Mr Wang Wenbin, spokesperson of the Ministry of Foreign Affairs, welcomed the European Council’s decision two days later in the regular press conference and stated that China had also completed the internal procedures for the ratification:

This is China's first comprehensive, high-level bilateral agreement on GIs, and the first major trade agreement between China and the EU in recent years. It is a monumental agreement that will deepen trade cooperation, deliver greater benefits to Chinese and European people, and demonstrate the Chinese government's resolve in advancing high-level opening up and the protection of IPRs. 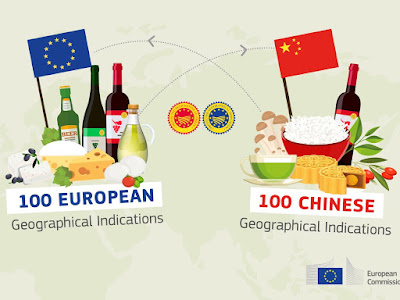 As the image above from the European Commission’s Twitter shows, the agreement ensures that 100 EU agri-food GIs and 100 Chinese agri-food GIs will get mutual strong protection on each other's internal markets.

Article 4 defines the scope of protection provided to the selected GIs; Article 4.1(b) is especially worth noting, as it discusses going the extra mile in furthering the protection of the GIs:

This dialogue of the EU-China cooperation on GIs was opened back in September 2010. The latest concrete result was the completion of the ‘10 plus 10’ project in 2012, which provided mutual protection on 20 agriculture GIs in total, ten within each other’s territories. This time, the ‘100 plus 100 in 2020’ is a major step forward.

The EU-China agri-food trade has been remarkable. A Commission report showed that China was the second destination of exports of EU agri-food products from September 2018 to August 2019, reaching €12.8 billion; it was also the second destination of EU exports of products protected as GIs (accounting for 9% of its value), including wines, agri-food products and spirit drinks. In June 2020, the agri-food monitor observed that ‘the COVID-19 outbreak did not appear to impact the EU’s agri-food exports to China, as monthly values rose by €291 million compared to February 2019.’

The Chinese market is known as a high-growth market, surely no exception for exotic food and drinks. To quote Agriculture and Rural Development Commissioner Phil Hogan: ‘Consumers are willing to pay a higher price, trusting the origin and authenticity of these products, while further rewarding farmers.’ It is noted that this is particularly the case for those who ‘have a taste for iconic, high-quality and genuine European products’.

This high-level cooperation is good news for foodies. For instance, when craving some Salamini Italiani alla Cacciatora or Pu'er Cha (普洱茶), people can now save themselves the trouble of guessing which product is actually from the specific geographic area they want by spotting the official GI symbol.

In addition, the range of products to choose from will greatly increase because the two markets produce different GI products well. According to the Agreement Annexes, 72 out of the 100 EU GIs are alcoholic beverages, while 28 of the 100 Chinese GIs are teas. It seems that this mechanism based on equality and exchange of needed goods will be able to drive the bilateral GI-related trades, which will benefit many, including producers, agri-traders and consumers on both sides.

The agreement is not signed yet; place and time are still to be determined. Four years after it is put into place, an additional 175 GI names from both sides will be covered.

In the meantime, this Kat believes smoother cooperation could be achieved if the established domestic GI system in China was further simplified and explained properly. Efforts have been made in recent years: the 2018 State Council Institutional Reform made adjustments to the former three competent authorities and appointed the National IP Administration (CNIPA) as the only central GI administration; the CNIPA issued the Measures for the Administration of the Use of Special Marks for GIs (for Trial Implementation) on 3 April 2020, which marked a new chapter of the GI system in China. To date, there are still problems in the lack of substantive unity in the GI administration and the systematic standards of reviewing.

Furthermore, if the value of GIs and the pertinent criteria that the standard-setters hold can be better understood by a much broader audience, GIs' benefits to society are more likely to be fully exploited.
European Council authorises signature of the EU-China agreement on geographical indications

Reviewed by Tian Lu on Tuesday, July 28, 2020 Rating: 5
The IPKat licenses the use of its blog posts under a Creative Commons Attribution-Non Commercial Licence.