Tian Lu Saturday, May 26, 2018 - §101, Intellectual Property Owners Association (IPO), patent eligibility., Tian Lu, trade secret
The Intellectual Property Owners Association (IPO), established in 1972, is a trade association for owners of patents, trade marks, copyrights and trade secrets. It serves all intellectual property owners in all industries and all fields of technology. On May 3rd, the 2018 European Practice Committee Conference organized by IPO’s European Practice Committee took place at InterContinental Amstel Amsterdam, the much-loved landmark on the Amstel River banks with more than 150 years of elegance. This Kat was delighted to attend the conference and here is her report.

1. The very first speech was already quite heavy thought-provoking: patent eligibility legislation and 35 U.S.C. §101 (hereinafter referred to as §101).

As showed in the attached chart, many groups have been working on proposals regarding patent eligibility legislations, whilst some parties with well-established portfolios may hold the opinion that no change is necessary. In terms of timing, though, considering the ongoing lobbying activities, US Congress is not likely to act this year, maybe at best 2019 -- dark skies continue, possible clearing is in distant, and the future seems to be uncertain.

Starting by a presenting snapshot of what was going on in reviewing petitions at PTO (see the slide below), of which around half of the petitions were instituted, a quarter were either denied or reached the final written decisions, and in total a quarter were settled, Kevin then highlighted three main factors determining the outcome in reviews: (1) the strength of grounds: quality of prior art is the key. If relying on novelty then reference must be crystal clear; (2) claim your interpretation: when claims are clearly not patentable over prior art, the claim interpretation may be the only escape; (3) the declaration which supports claim interpretations. The work of “dots connection” of prior art references might be able to show obviousness and to support well-reasoned rationale(s) for obviousness. 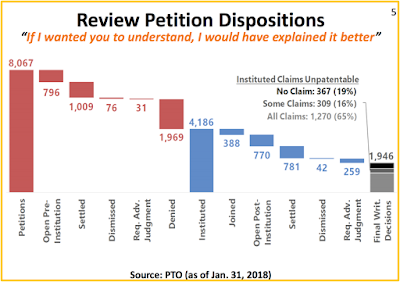 On the best practices for petitions, Kevin suggested focusing on up to two well-developed challenges and on a theme in petition and throughout the trial; all the factual assertions shall be fully supported by expert testimonies; special consideration need to be given to proactively explain certain issues; and it is key not to overlook the details, such as authenticating the questionable prior art, certifying the necessary translations, and following all formatting rules.

On PTAB’s discretion to institute, he noted that the PTAB has provided checklists (or more of a filter) of factors to be evaluated in determining whether to deny institution, which based on either prior arts or arguments that were previously presented to the Office during prosecution under § 325(d), or a follow-on petition under 35 U.S.C. § 314(a) or § 325(d). For more information, see an article here on the PTAB’s Discretion to Deny Institution written by Kevin B. Laurence and Matthew C. Phillips.

Firstly, he reviewed what is going on in the district courts: civil cases filed in US district courts dropped 8% in FY 2017, which ended September 30, 2017 (a 17.7% decline in FY 2017 as compared with FY 2016, and a ~25% decline in FY 2017 as compared with FY 2013); about 75% inter partes reviews (IPRs) are associated with litigation, among which, many district court cases are being stayed during IPRs, and the promptness of filing IPR and requesting stay is significant; the Supreme Court’s TC Heartland decision on venue is affecting number and place of district court filings; the Federal Circuit offers some hope to patent owners in recent §101 decisions; district courts, though, used to be very reluctant to do so, continue to address Section 101 issues on a motion to dismiss at an early stage.

He elaborated further by referring to several cases:

-- Oil States Energy Services, LLC v. Greene’s Energy Group, LLC -- Whether IPR, an adversarial process used by the Patent and Trademark Office (PTO) to analyze the validity of existing patents, violates the Constitution by extinguishing private property rights through a non-Article III forum without a jury?

-- WesternGeco v. ION Geophysical -- Whether the U.S. Court of Appeals for the Federal Circuit erred in holding that lost profits arising from prohibited combinations occurring outside of the United States are categorically unavailable in cases in which patent infringement is proven under 35 U.S.C. §271(f).

And emphatically, the TC Heartland v. Kraft Foods case which had certain effects on plaintiffs’ selections of venue, considering the ruling that the venue for patent infringement cases is governed by 35 U.S.C. § 1400(b). And as applied to domestic corporations, “residence” in §1400(b) refers only to the State of incorporation. He also touched upon the proposed legislations: as a judge once mentioned, the careful analysis and thoughts that had been put into the proposals are appreciated, yet they sometimes toss confusion, and might be in fact un-workable. And it seems difficult to get the courts and Congress to be as rational as when we were in the 1952 patent act era, as long as we still have all of these different opinions.

Inspired by Article 39 of TRIPS, here is the EU Directive 2016/943 on the protection of undisclosed knowhow and business information (trade secrets) against their unlawful acquisition, use and disclosure. So far, patchwork protection could be observed, which means the situations differ from country to country in Europe. On the question of "why a Directive?" He explained that the reasons include the differences in protection of national laws and the relevant statistic evidences: surveys among companies in EU show that 75 % considers trade secrets to be strategically important for growth and for competitive power and innovation of their business; appr. 1 out 5 companies has been confronted during the last 10 years with illegal use of trade secrets; appr. 2 out of 5 companies declared that the risk of illegal use of trade secrets increased over the last 10 years. In addition, PWC Study 2014 indicated that the value of theft of trade secrets in US equals to 1-3% of GDP US.

The conditions of protection in EU were covered as well, inter alia, the reasonable steps in keeping the information confidential. As a finishing, Prof. Charles Gielen explained the unlawful and not unlawful deeds under Article 4(2-5) and Article 3 and 5.

She noted that Member States may take different approaches to trade secrets, e.g. property interest, unlawful competition/tort law, breach of confidence, or even criminal law. The Trade Secret Directive (TSD) instead does not require a too strict regime of secrecy that lacking consideration of public interest. Therefore, the main task of the TSD is to allow the very personal holders of trade secret to decide to whom and to what extent the trade secret will be shared with others. So, private laws, no matter it is IP law or tort law, basically put up fences around the room of privacy, and the task for procedural law is to fix the broken-down of the fence caused by the dishonest behaviours. Accordingly, the TSD tackles the issues with fulfilling the main task of ensuring the possibilities to enforce the trade secret without either putting the existence of the trade secret or the competitive advantages at risk. However, the paradox lies in the fact that in substantive law, know-how is not protected as such, but only against unlawfully undermining the intended secrecy by misappropriation; whilst in procedural law, rights arising from trade secret misappropriation are enforced in the course of regular civil proceedings, which have to meet the standard of a fair trial (Art. 6 ECHR), which apparently may jeopardize the very existence and purpose of know-how.

Unfortunately, there seems to be no guidance at all regarding how we are supposed to achieve this balance, Art. 9(3) TSD just says that we must have efficient remedy and fair hearing, not how we actually will do it. She then turned to search solutions from national jurisdictions. In Germany, a Draft on April 9, 2018 allows courts to (1) order all participants to preserve confidentiality; (2) prohibit use of information gained; (3) restrict access to documents; (4) redact judgment, which seems unable to solve the remaining problems of the low sanctions for violation of order (1000 €) and the burden of proof. The France Draft on February 9, 2018 allows courts to (1) impose in camera proceedings; (2) order the lawyer to preserve confidentiality via the client; (3) prohibit use and communication of information, which leaves the constitutionality problem where the art. 6 ECHR is disputed.

She explained the questions including: why Article 6 and the following merely require the minimum standard of implementation for the Member States, why the EU will not mess with national civil procedural laws that are closely tied with the courts’ organisations, why it is so difficult to find compromises, how trade secrets could actually be protected in the EU level, what are the standards of the rules, and how trade secret as a toolbox has been used. Finally, Germany and France were particularly mentioned as examples.

On the possible back doors for practitioners, she explained that the common recommendations including either file empty complaint (pass the ball to courts) or arbitration. Moreover, possible alternatives might also be considerable, for instance, forum shopping (Art. 7 No. 2 Brussels Regulation), combine injunctive relief with main proceedings, choose different jurisdiction for litigation and taking of evidence (Regulation on Taking of Evidence), or just add Section 1782 Proceedings in the U.S. Eventually, for the time being trade secret holders should make the best of it by combining the virtues of different jurisdictions.

3. Carlo Cotrone (Baker Hughes, a GE Company, Houston, TX, USA) briefed the current practice in US trade secret protection. He mentioned that the increasingly weak US patent system, which used to be the King, has led to greater emphasis and reliance on trade secrets. Theft by foreign partners or their agents simply has become the key element of tariff/trade war narrative. An overview of the litigation activity was provided: since the enactment of the Defend Trade Secrets Act (DTSA) in 2016, more than 360 DTSA claims were filed (in > 343 complaints) in federal court; >15% were filed in California [source: SheppardMullin IP Law Blog, March 26, 2018]. Further, quite “inevitably”, the doctrines of inevitable disclosure and whistleblower immunity were scrutinized, together with the procedure of ex parte seizures.

Speaking of practices for trade secret protection, Carlo emphasised that prevention and preparedness remain paramount. And specific considerations shall be made on the following aspects: data classification of both policies and procedures; technology/physical security infrastructure; data loss prevention in software and processes; robust contracts, employment agreements; due diligence, i.e. engagement with customers, suppliers, and licensees; relationships with outside counsel and law enforcement; use patents to complement trade secret strategy; employee training, i.e. building “IP culture”.

Reviewed by Tian Lu on Saturday, May 26, 2018 Rating: 5
The IPKat licenses the use of its blog posts under a Creative Commons Attribution-Non Commercial Licence.