Rose Hughes Friday, March 01, 2019 - anti-IL-17, Genentech, insufficiency, ixekizumab, Lilly, plausibility, Second medical use, SPC, Taltz, third party authorization, Warner-Lambert
Mr Justice Arnold has today handed down two judgments relating to Genentech's EP (UK) patent for an anti-IL-17 antibody and its use in the treatment of psoriasis and rheumatoid arthritis (RA). The first judgment ([2019] EWHC 387 (Pat)) relates to the validity of the patent. The second judgment ([2019] EWHC 388 (Pat)) relates to the validity of a Supplementary Protection Certificate (SPC) sought by Genentech based on the patent and Lilly's market authorization for Taltz. Key issues of the cases are the plausibility of second medical use claims and whether an SPC can be based on a third party authorization with this point now subject to a CJEU reference. 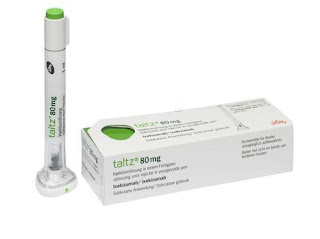 Lilly markets an anti-IL-17A/F antibody, ixekizumab, for the treatment of psoriasis and psoriatic arthritis (Taltz). Genentech do not currently sell a product corresponding to the patent. Genentech have nonetheless filed an SPC application (SPC/GB16/056) based on the patent and Lilly's marketing authorization for Taltz.

Lilly brought a case attacking the validity of the patent on the grounds of lack of novelty, obviousness and insufficiency.  The issue of patent validity was dealt with in the first judgment ("The Patent Judgment").

Lilly further sought a declaration that the Genentech SPC would, if granted, not be valid. First, Lilly argued that Taltz does not fall under the scope of the Patent. The SPC application would not thereby comply with Article 3(a) of the SPC Regulation (No 469/2009). Second, Lilly argued that the market authorization for Taltz is a third party authorization. As such, Lilly argued, the SPC application did not comply with Articles 2, 3(b) and/or 3(d) of the SPC Regulation.

The Kats are still digesting the two judgments in full, and will provide further commentary and analysis shortly. Mr Justice Arnold himself felt it "pertinent to observe at the outset that this is one of the most complex patent cases I have ever tried". In the meantime, here are Mr Justice Arnold's conclusions in summary.

Mr Justice Arnold concluded that the claims directed to the antibody itself are obvious in so far as they related to RA. The second medical use claims were found insufficient for lack of plausibility in so far as they were directed to psoriasis, applying the principles established in Warner-Lamber v Actavis (see IPKat post here). Notably, Mr Justice Arnold considered the principles of insufficiency established by Warner-Lambert v Actavis applicable, even though the use of the antibody to treat psoriasis was a first medical use. On the basis of expert evidence, Mr Justice Arnold found at paragraph 578:


"In my judgment the skilled person would not regard it as plausible that an anti-IL-17A/F antibody would have a discernible therapeutic effect on psoriasis for the reasons given by Prof Krueger. I would emphasise five points. First, the absence from the Patent of any experimental data concerning the role or effect of IL-17A/F, let alone an anti-IL-17A/F antibody, in psoriasis. Secondly, the absence of any discussion of the role or effect of IL-17A/F in psoriasis. Thirdly, the limited support for IL-17A/A (let alone IL-17A/F) having a pathogenic role in psoriasis provided by the papers cited in the Patent, particularly given the common general knowledge as to all the other cytokines which were implicated in psoriasis. Fourthly, the fact that the Patent shows that IL-17A/F is an order of magnitude less potent than IL-17A/A. Fifthly, the fact that the specification claims efficacy against a broad list of conditions which it is wholly implausible that an anti-IL-17A/F antibody (or any form of IL-17A/F therapy) would be effective against. Moreover, there is no emphasis on psoriasis in the specification. Such emphasis as there is concerns RA, which the skilled dermatologist would appreciate raised different considerations to psoriasis. In short, the claim of efficacy against psoriasis is speculative."

Given the finding of invalidity with respect to the patent, Mr Justice Arnold concluded that the SPC application must fail. However, the Arnold J nonetheless felt it necessarily to submit a reference to the CJEU on the question of the third party market authorization. Particularly, the following question was referred:

“Does the SPC Regulation preclude the grant of an SPC to the proprietor of a basic patent in respect of a product which is the subject of a marketing authorisation held by a third party without that party’s consent?”


"[a]s matters currently stand, there is a very real possibility that the courts of the UK will lose their jurisdiction to make references to the CJEU on 29 March 2019. Since any judgment of the Court of Appeal would necessarily be given some time after that, it could well be the case that, whereas this Court currently has jurisdiction to make a reference, the Court of Appeal would not have jurisdiction to do so. In those exceptional circumstances, this Court should make a reference now. As he pointed out, it would be possible for the reference to be withdrawn later if circumstances changed."

Mr Justice Arnold also noted that an "EU wide" answer to the third party market authorization question was required. This was in view of Genentech's parallel applications for SPCs based on the patent filed in other EU member states. Finally, Mr Justice Arnold noted that the issue of SPCs based on third party MAs had been raised previously, but had for various reasons not been referred. Therefore:


"it was an issue for the pharmaceutical industry generally which should be resolved sooner rather than later. Only the CJEU could provide a definitive resolution" (paragraph 49).

Stay tuned to IPKat for further analysis!  This Kat and the AmeriKat are particularly eager to delve into the 141 pages of Arnoldian dicta.  Perfect for a rainy weekend ahead.
BREAKING: Mr Justice Arnold finds Genentech's anti-IL-17 patent and SPC application invalid, but not without a CJEU reference first

Reviewed by Rose Hughes on Friday, March 01, 2019 Rating: 5
The IPKat licenses the use of its blog posts under a Creative Commons Attribution-Non Commercial Licence.