Nedim Malovic Saturday, August 15, 2020 - #IPKat, 3D shapes, distinctiveness, Jaguar Land Rover, Nedim Malovic, trade marks
In a recent decision, the High Court of Justice of England and Wales held that the shapes of the Land Rover Defender cars are not eligible for trade mark registration. In particular, it upheld the findings of the Hearing Officer of the UK Intellectual Property Officers (IPO) and considered it sufficient that merely 20 and 40% of the respondents recognized the cars as belonging to the Land Rover Defender series. This finding was relevant since it led to the conclusion that the marks in question do not have inherent or acquired distinctiveness.

With four applications filed with the IPO in May and April 2016, the Appellant – Jaguar Land Rover (JLR) – sought to register the following shapes of the Land Rover Defender cars: 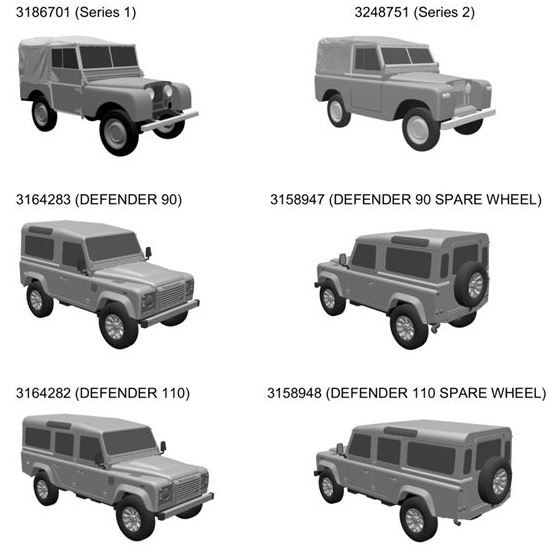 Registration was sought for goods and services in Classes 9 (computer hardware, firmware or software), 12 (vehicles), 14 (horological and chronometric instruments), 28 (toys, games and playthings), and 37 (conversion, repair, servicing) of the Nice Classification.

In October 2019, the IPO allowed the Opponent Ineos to proceed with its opposition. The application was subsequently refused, on the basis of Article 3 (lack of inherent and acquired distinctiveness) of the UK Trade Marks Act 1994.

The key question before the Hearing Officer was whether – for the purposes of establishing acquired distinctiveness – JLR could show that a significant proportion of relevant average consumers would perceive the shapes applied for, without further indication, as distinguishing goods which have been placed on the market by it, or with its consent, from those of other undertakings. The Hearing Officer considered a survey commissioned for the purpose of answering the above question. The conclusion was that the survey showed a significant, but not overwhelming degree of recognition of the marks in question.

JLR filed a notice of appeal to the High Court arguing – amongst others – that the Hearing Office had not correctly applied the tests for acquired and inherent distinctiveness. In response, Ineos further submitted that the shape of the signs applied for gives substantial value to the goods and so registration should also be refused on that ground.

The present analysis only concerns the Court’s findings in relation to the inherent and acquired distinctiveness of the marks.

In line with the principles set out in The Royal Mint Ltd v The Commonwealth Mint and Philatelic Bureau Ltd [2017] EWHC 417, the Court first noted that it should not substitute its own assessment to that of the Hearing Officer, unless it is satisfied that they have made a material error in law or their findings are wrong. Situations treated as wrong encompass those in which a decision is (a) unsupportable, (b) simply wrong, and (c) where the view expressed by the Hearing Officer is one about which the Court is doubtful but, on balance, concludes was wrong.

Having established that inherent distinctiveness does not subsist in relation to the marks in question, the Court moved on to consider acquired distinctiveness. In this regard, it noted that the Hearing Officer had based his approach to the assessment of acquired distinctiveness by considering the jurisprudence of the Court of Justice of the European Union (CJEU), notably the decision in C-108/97, Windsurfing Chiemsee. The Court also recalled the decision of Kitchin LJ (as he then was) in Société de Produits Nestlé v Cadbury UK Ltd [2017] EWCA Civ 358.

In C-108/97, Windsurfing the CJEU specified that one relevant factor which must be considered is whether the Appellant has shown that a significant proportion of relevant average consumers would perceive the shapes applied for, without further indication, as distinguishing goods which have been placed on the market by the Appellant, or with its consent, from those of other undertakings.

Furthermore, that same decision provides that, where the competent authority has particular difficulty in assessing the distinctive character of a mark, EU law does not preclude it from having recourse, under the conditions laid down by its own national law, to an opinion poll as guidance for its judgment.

The Appellant submitted that the Hearing Officer had erred in the manner in which he had approached the assessment of the distinctive character, and in particular his treatment of the surveys.

The survey showed that somewhere between 20 and 40% of respondents were confident that the pictures shown to them depicted a Land Rover Defender 90. The remaining respondents either did not name a maker, were not sure who made the car, thought that the car was a different one made by another maker, or were guessing. The survey therefore demonstrated a significant, but not overwhelming, degree of recognition of the shape of the Land Rover Defender.

Contrary to the Appellant’s submission, the Court did not have trouble understanding where the Hearing Officer’s range of 20-40% came from and the way it was conducted. In particular, the fact that a respondent would simply mention LAND ROVER and no other brand in response to the pictures showed depicting the shapes of the cars did not mean that respondent necessarily regarded the shape, by itself, as distinguishing the goods of JLR from those of other undertakings. The survey showed some degree of recognition of the shape and a level of association with JLR, but not recognition of the shapes as trade marks, i.e. as designating the goods of JLR and no other's.

For those reasons, the Court was satisfied that the Hearing Officer had carefully and fairly assessed the survey evidence in a way which disclosed no error of principle.

What this case essentially confirms is the approach previously adopted by Arnold J (as he then was) in Société de Produits Nestlé v Cadbury UK Ltd [2016] EWHC 50 and Kitchin LJ (as he then was) in [2017] EWCA Civ 358. What appears to be important is whether a shape on its own depart ssignificantly from the norms and customs of the sector, for the purposes of establishing either inherent or acquired distinctiveness. In sum, registering 3D shapes as trade marks is a challenging – if not often chimeric – endeavour.

In addition, the decision also adds to the body of cases (and literature) which shows how thorny the issue of polls is. As readers know, their value has often been a subject of criticism. The present case will probably add to the discussion of the role of polls in trade mark law.
Jaguar Land Rover loses trade mark battle over Land Rover Defender car series

Reviewed by Nedim Malovic on Saturday, August 15, 2020 Rating: 5
The IPKat licenses the use of its blog posts under a Creative Commons Attribution-Non Commercial Licence.