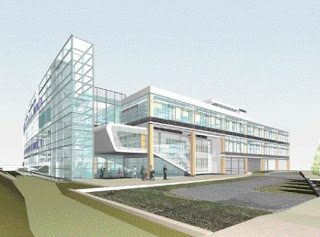 While the problems facing the leaders of the world's major economies are enormous, it is notoriously difficult for them to identify solutions on which they share a common outlook. However, the IPKat learns from the authoritative Intellectual Property Watch weblog and news servive that a communiqué from the G20 Summit taking place this week in London announced late last night that consensus had been achieved in at least one small area of global significance, though one which is of serious concern to IP practitioners and their clients: an agreement has been struck in principle on the establishment of a World Intellectual Property Litigation Court by 2012.
Right: the G20 countries have promised that the new court will have a futuristic appearance

The notion of a World Intellectual Property Litigation Court was first conceived by the World Intellectual Property Organization (WIPO), which has more than a decade of experience in the provision of IP arbitration and mediation services regarding domain names as well as conventional forms of IP. WPO sees the proposed court as a convenient forum for dealing with issues arising from the planned global patent, trade mark and other registered rights systems that are seen as a natural extension of the present Patent Cooperation Treaty and Madrid and Hague systems for obtaining rights internationally. Indeed, construction has already commenced on several sites in Geneva in anticipation of the G20 decision, each of which would house not only the courts but also the host of translators which the new scheme is expected to attract. Said a spokesman for WIPO:

"The World Intellectual Property Organization welcomes this adoption of this proposal as a recognition of the need to balance the requirements of least developed litigation nations (the "LDL" group) with the fair treatment of intellectual property owners and creators, having regard to the organization's development programme and the need to preserve the organisation's prerogatives from unwarranted encroachments by the World Trade Organization".

This proposal, while warmly adopted in principle by the G20 heads, is fraught with problems. The Chinese have suggested that this Court be located in China, since that is where most infringing products are made. The French have indicated that a Chinese forum will only be acceptable if the language of the proceedings is French. The Germans are advocating the use of German judges for the sake of efficiency, while the United States is holding out for the rendition of defendants so that their liability can be established before they stand trial. The British say that, if the court is to be located outside the United Kingdom, it should at least have a British President (Lord Justice Jacob is strongly tipped).

G20 insiders have indicated that the proposed court is to be overseen by a panel of influential and internationally respected jurists in the field of intellectual property, of whom Senor Ignacio P. Gato has been touted as a possible candidate; other highly-tipped jurists are Prof. Dr. Dr. jur. Wilhelm Neu and the Vietnamese scholar Dhuun Kan Buc Nel.

The G20 nations are Argentina, Australia, Brazil, Canada, China, France, Germany, India, Indonesia, Italy, Japan, Mexico, Russia, Saudi Arabia, South Africa, South Korea, Turkey, the United Kingdom and the United States, plus the European Union (represented by the rotating Council presidency and the European Central Bank).
Says the IPKat, this proposal makes a welcome change from endless discussions about money, probably because the G20 nations have finally come to recognise the true monetary value of IP and the loss to their coffers through counterfeits and frauds.  Merpel says, a World IP Litigation Court by 2012? That'll be just in time to litigate the ambush marketing consequent on the London Olympics.
G20 recommends World IP Court by 2012

Reviewed by Jeremy on Wednesday, April 01, 2009 Rating: 5
The IPKat licenses the use of its blog posts under a Creative Commons Attribution-Non Commercial Licence.