Bad news for Lego in Germany 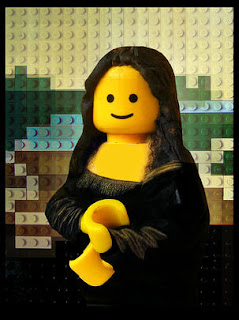 The IPKat's scholarly friend Guido Westkamp has drawn his attention to a decision last week by the Bundesgerichtshof (the German Supreme Court) that Lego toy bricks can no longer be registered as three-dimensional trade marks (Decision of 16.7. 2009 – I ZB 53/07 and 55/07). The full text of the decision is not yet available, but you can read all about it in German via this press release.
Right: Mona Lisa in Lego, by the talented and imaginative Italian artist/photographer Marco Pece. Would works like this have constituted trade mark use? And would they be regarded as taking unfair advantage, without due cause, of the reputation or distinctive character of the Lego brick trade marks? Perhaps now we shall never know.
Says Guido:

"The court asserted that, in assessing registrability as a three dimensional trade mark under Article 3(2)of the Trade Marks Act, the square form of the bricks must be disregarded altogether (this being the basic form of any such product in the respective class for toys), whereas the 'pimples' on the brick's upper side were purely functional. This rulng confirmed an earlier decision of the Patent Office which ordered revocation of the mark. Effectively,this means that Lego can rely neither on trade marks nor on unfair competition (the latter point having been decided in 2004) in seeking to protect its brick shapes". 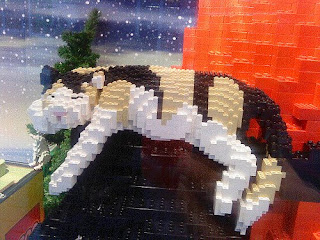 Exciting things to do with Lego bricks here and here
Lego city of the future here
An impossible Lego model? Click here
How Lego bricks work here
Bad news for Lego in Germany

Reviewed by Jeremy on Monday, July 20, 2009 Rating: 5
The IPKat licenses the use of its blog posts under a Creative Commons Attribution-Non Commercial Licence.