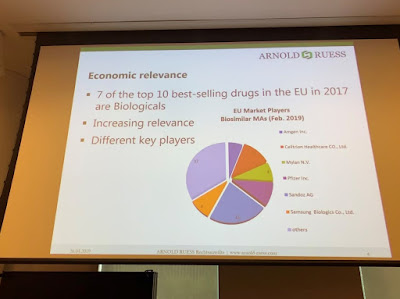 On a rainy Friday morning in New York at the Fordham IP Conference, the first patents session on the patent track was on Biologics and Biosimilars, moderated by John Lee  (Gilbert + Tobin, Sydney).

Over to guest Kat, Amy Crouch (Simmons & Simmons), who reports on the session:


"Cordula Schumacher (Arnold Ruess, Düsseldorf) kicked off the session by introducing the subject matter: “Biologics” are large, highly complex molecules produced by living cells and “Biosimilars” are not identical and only similar, due to the use of different cell cultures and different manufacturing conditions.  Importantly there is no automatic substitution between these types of products.   Biological medicines made up 7 of the top 10 best-selling drugs in the EU in 2017 (see slide - top, right).

Development and manufacture of biosimilars are extremely expensive in comparison to that of generic medicines and more marketing is often also required to convince doctors to switch.   In a patent context, there are incentives to launch at risk because it is very difficult to "clear the way” in advance.  Multiple patents often grant during the development of a biosimilar.   Properly analyizing potential infringement in respect of manufacturing patents is also complex and the assessment of damages is more difficult than for a generic.    The complex balancing of interests has meant that in German PI proceedings courts are looking much more closely at validity and infringement.  In the Rituximab case (District Court of Munich, May 2017), the court said that the generic case law stipulating that the balance of interests in principle favors the originator cannot be applied to biosimilar situations and that a full assessment of the specific circumstances is required in each case.

From the audience Jürgen Dressel (ex-Novartis Pharma AG, Basel) asked about the uptake of biosimilars and whether costs will decrease the more medicines healthcare systems have to manage substitution of.  Cordula thought this would happen and that it would be interesting to have a different landscape in Europe, noting that the regulatory framework is also very important – i.e. as soon as pharmacies are obliged to hand over the biosimilar then an identical market situation to that of generics will be created. 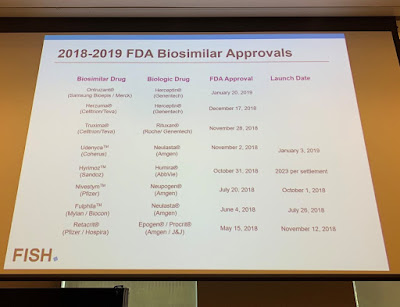 It is now clear that a biosimilar can decide not to engage in the BPCIA “Patent Dance”.  It is open to them to say “I don’t want to dance.  I am not going to hand over my ABLA”.   This was illustrated by Brian in the slide below, right.

If the biosimilar decides not to dance, i.e. step I(2)(A) is not completed, then the rest of the dance simply does not happen.   The benefits of dancing for the biosimilar include that they control the number of patents in suit and can ensure that certain patents are in the first-wave litigation.   Further, the early exchange of contentions provides insight into the patentee’s infringement and validity positions (although this does apply vice-versa) and the patentee must list all patents on the penalty of losing its right to assert them.   The drawbacks of dancing for the biosimilar include that they must provide confidential information (including manufacturing details) upfront and that they will need to stake out early positions on invalidity and non-infringement that could possibly be used as admissions in litigation.   Failure to participate in the dance may, however, be relevant to a PI motion.

Moderator John Lee asked if life is simply much harder for a biosimilar?   Brian thought that it is, yes, because so many of the relevant patents are process patents which makes the situation more complicated.  After the dance is over, sometimes 30 different patents are listed – and that is in a normal situation rather than the even more extreme Humira patent thicket.    The BPCIA is complicated, allowing patentees to assert so many patents and ultimately may be slowing down the uptake of biosimilars in the US as compared to Europe.   A statutory fix may help but it is unclear what such a fix should be.

Nicola Dagg (Kirkland & Ellis International LLP, London) then spoke about whether we should question the automatic right to injunctions for biologic medicines?  Preliminary injunctions are already rare because there is such a long lead time for approval of biologics.  In the UK injunctions are discretionary remedies and the IP Enforcement Directive 2004/48/EC imposes a proportionality requirement.  Article 44 of TRIPs provides that judicial authorities “shall have the authority” to order a party to desist from an infringement, but it does not require a Court to exercise its authority in a particular way.   Each case is fact sensitive and there are numerous reasons both for and against injunctions being granted: 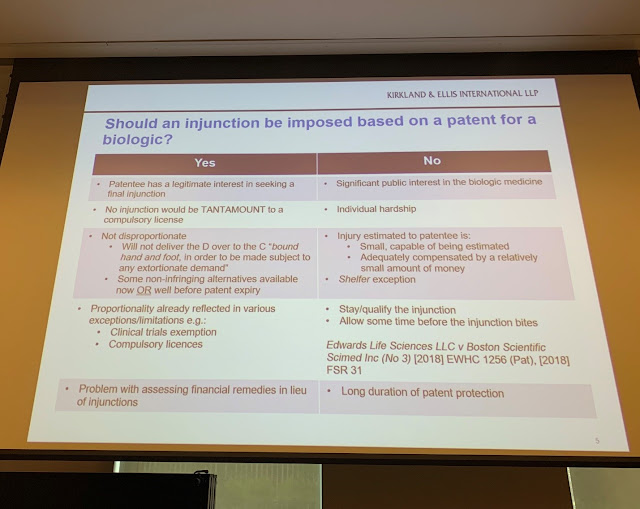 The injunction granted by the UK Court of Appeal in Regeneron v Kymab (2018) demonstrates the flexibility that is possible when an injunction is granted.  That particular injunction provided for carve outs for (a) doing acts for the purpose of a medical product assessment and (b) doing any acts to render the transgenic mice subject to the injunction as non-infringing.  Further the injunction was stayed pending appeal to the Supreme Court and even provided for liberty to apply for a spring board injunction.

What is important is that the right monetary substitute is found if an injunction is not granted.  How can the economic value of the right be properly assessed?   How can you get to the real profits and can a royalty be adequate?

Panelist Roberto Rodrigues (Licks Attorneys) commented that in Brazil there have been 8 biologic cases which have resulted in 5 preliminary injunctions based on pending marketing approvals.   This is representative of the strong patent system in Brazil where the judges are not receptive to issues of public interest.

Shimako Kato (Abe, Ikubo & Katayama, Tokyo) then spoke about the protection provided by antibody patents and striking the right balance between patentees and competitors, whether originator vs originator or originator vs biosimilar.   There are real difficulties with claim drafting for broad and limited claims:

This was dealt with in the Amgen v Sanofi (PCSK 9 antibody) cases.  Sanofi’s product, alirocumab, was not described in the specification of Amgen’s patents, which claimed “neutralising” antibodies which “compete” for binding with various reference antibodies.   The Tokyo District Court found that the skilled person would have understood that “antibodies which satisfy enablement are not limited to the antibodies obtained by substituting one or a few amino acids of the antibodies described in the specification”.  For this reason Sanofi’s antibody was found to fall within the scope of the claims.

The IP High Court and the Tokyo District Court both found the patents to be inventive.  Based on the prior art the skilled person would have been motivated to obtain anti-PCSK 9 monoclonal antibodies, but optimising the process to obtain the specific antibodies required an excessive burden of trial and error.    An injunction was granted but it is currently stayed pending appeals of the decisions by Sanofi.

Cordula finished the session by urging caution not to limit the availability of injunctions too much.  If patents for life saving drugs have less effect, then that may discourage investment.  Plus, for biosimilars, switching patients back to the originator product is always a possibility so injunctions are less problematic than for originator products with no obvious substitute. "

Reviewed by Annsley Merelle Ward on Sunday, April 28, 2019 Rating: 5
The IPKat licenses the use of its blog posts under a Creative Commons Attribution-Non Commercial Licence.