The event kicked off with an empirical look at the Intellectual Property Enterprise Court (IPEC) Small Claims track, presented by Dr Sheona Burrow. As – in the grand scheme of things – a young and innovative court, it is valuable to get an insight into how the IPEC Small Claims court is used. For instance, just over half of the claimants came from a creative industry, but there is a satisfying spread which shows that it is not just the “creative industries” making use of the small claims track.

The court is true to its “small claims” title, with the average claim valued at around £3.5k. Dr Burrow did, however, identify a spike in the values towards the upper threshold of the limit for the track, now set at £10k. This reveals that claimants, particularly in trade mark claims, appear to be deliberately claiming for this figure in damages to bring them “under the wire” into the small claims track.

Although the procedure in the IPEC is typically more streamlined and straightforward than in higher courts, in over 40% of cases issued there was some evidence that one of the parties did not understand court procedure. This leads to other procedural hiccups or anomalies such as undefended claims floundering and failing to get summary judgment in the claimant’s favour.

Almost half of the claims brought in the IPEC Small Claims track are brought by freelance photographers, a stat which inspired this collaboration combining Dr Burrow’s empirical research with  Dr Elena Cooper’s historical perspective on photographers and image libraries.

Claimants in such cases seem to almost always be successful on liability, with damages mainly calculated with regard to lost royalties. This is largely derived from the reasoning of Lord Wilberforce in General Tire v Firestone Tyre and Rubber Company Limited [1975] 2 All ER 173 – a patent case in which it was held that "[d]amages should be liberally assessed but.. the object is to compensate the plaintiffs and not punish the defendants".

The court is looking for the royalty which "would have been arrived at in negotiations between the parties, had each been making reasonable use of their respective bargaining positions, bearing in mind the information available to the parties and the commercial context at the time that notional negotiation should have taken place", as Arnold J put it in Force India Formula One v 1 Malaysia Racing Team & ors [2012] EWHC 616 (Ch). Freelance photographers tend to cite the National Union of Journalists (NUJ) rates when quantifying damages, but the discussion seems to indicate that standard picture library rates (generally lower than the NUJ rates) are the preferred starting point.

However, all is not lost for claimants. The court can award a 100% uplift on those damages, using the Walmsley v Education Limited [2014] IPEC case where that uplift was treated as a standard royalty in the industry for reproduction of photographs without attribution. Indeed, it appears that the ability of the IPEC to award additional damages in small claims is a factor which makes it particularly attractive to litigants.

The next presentation took a broader view of copyright litigation in recent years, particularly following the "watershed" Newzbin litigation in the early 2010s, when ISPs were required to block customer access to the file sharing site.

The well-documented proliferation of streaming services and platforms appears to have succeeded in reducing piracy of film, TV and music content (even if "freemium" services have not made up for the decline in sales, particularly of music). Following the Karen Murphy ("pub landlady") case, it appears to be sports bodies such as the Premier League, rather than film or television producers, pursuing injunctions to enforce copyright in sport broadcast.

The research also showed that the IPEC is getting faster. For a streamlined and efficient court, it was puzzlingly slow, at least at first, but this seems to be explained by there being only one permanent IPEC Multi-Track judge at a time. And that current judge, Hacon J, argues in favour of appointing more.

An empirical overview of litigation allows patterns between cases to be drawn that may not obvious close-up. Indeed a judge or recorder hearing a case may not be aware of a pattern of a misguided litigant (such as Mr Lilley of Lilley v DMG Events Ltd [2014] EWHC 610 (IPEC)) incurring unaffordable fees over various cases. There may be an argument for "filtering" copyright cases, but as was noted with in subsequent discussion, any such measures are likely to be met with suspicion.

[Preview of: “Who Is Steering the Jurisprudence of the European Court of Justice? The
Influence of Member State Submissions on Copyright Law” (forthcoming Modern Law
Review)]

This paper presented a really fascinating look at the "explosion" of copyright jurisprudence at the CJEU. As the judges typically have a public law, not a specialist IP, background, there are not always clear principles underlying the court’s reasoning. Moreover, of course, there is a sensitive political element around the primacy of EU law at this time of flux.

The authors looked at the rates at which countries intervened in copyright preliminary references to the CJEU, allowing them to draw some surprising conclusions. Smaller countries such as the Czech Republic seem to be investing relatively more in intervening in copyright cases than larger countries like France and particularly Germany, which made over thousands of submissions overall, but less than 1% of them in copyright cases.

The empirical analysis provides a useful tool for describing the ways in which countries intervene in copyright cases, e.g. from intervening only when that country’s court has made the preliminary reference, to intervening frequently no matter what the source of the reference.

As it contributes to every case and preliminary reference, the EU Commission appears to be the best at predicting - or influencing - the outcome of copyright cases at the CJEU. However, among the individual countries participating, it seems to be France which has the upper hand in making successful and influential submissions, usually with a pro-rightsholder stance. This forthcoming Modern Law Review paper will make really fascinating and timely reading.

Finally, the conference heard from Dr Georg von Graevenitz on trade mark clutter. This presentation in particular demonstrates one of the exceptional features of a cREATE event: that it draws together academics, practitioners and policymakers under one roof (a purely academic observation of EUIPO filing practices almost missed the "evergreening" tactic of refiling a mark at the end of its grace period).

The demand for natural words (on a cluttered register) is high – and "sky" is one of the most popular choices. Incidentally, the recent CJEU Sky v Skykick decision, holding that lack of clarity and precision can not be a ground for invalidity may not itself be an effective tool to de-clutter the register. 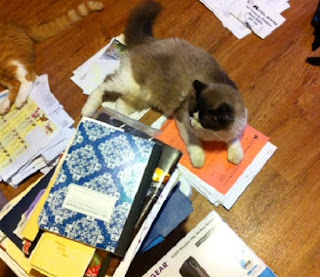 Kats tend to be poor at de-cluttering

This study investigates how changes in the fee structure for renewals leads to trade mark proprietors dropping surplus classes, and why. Surplus classes seems to be those which are popular anyway: typically classes which are adjacent to a company’s core business, such as a training element. Businesses with a broad range of interest anyway do not seem to have been affected by the increase in filing costs for three classes under the EU trade mark reform package.

It is very rewarding to take part in such an interdisciplinary conference, where it seems that the overall takeaway is greater than the sum of its parts. I am grateful to Prof. Martin Kretschmer and the AHRC Creative Industries Policy & Evidence Centre for arranging this event and BIICL for hosting.

Reviewed by Alex Woolgar on Friday, March 06, 2020 Rating: 5
The IPKat licenses the use of its blog posts under a Creative Commons Attribution-Non Commercial Licence.