If once is a misfortune and twice is careless, three times is…? Genentech loses UK SPC for Lucentis due to costly procedural error

Rose Hughes Monday, March 23, 2020 - Genentech, Lucentis, patents, Rose Hughes, SPC, Supplementary Protection Certificate, UK High Court
In the field of patents, an unintentional failure to pay the right fees at the right time can be a very costly mistake. The costs of a mistake are potentially even more significant for Supplementary Protection Certificates (SPC). SPCs provide extra years of patent protection (up to 5 years) based on a marketing authorisation for a clinical product. With a bulk of sales happening during the life of SPCs, SPCs can thus be very valuable to a patentee. A recent case before the UK High Court considered the consequences of underpaying the annuity fees for a UK SPC ([2020] EWHC 572 (Pat)). The UK is unique in requiring these fees to be paid as a lump sum at the start of the SPC term (Rule 116, Patents Rules). Unfortunately for the patentee, it seems there is little that can be done to rectify the mistake of underpayment.

The case concerned the SPC for Roche/Genentech’s anti-VEGF antibody ranibizumab (Lucentis). Lucentis is approved in the EU for treatment of eye disorders, including age-related macular degeneration (AMD). Readers may remember that Roche’s other anti-VEGF antibody Avastin was subject to another recent IP dispute in the UK High Court.

Genentech was granted an SPC for Lucentis in 2007. The Certificate stated that the SPC would have a term of just under 3 years, expiring in January 2022, subject to the payment of the appropriate fees. Owners of a UK SPC are required to pay a fee for each year of the SPC (Article 13(1) of the SPC Regulation). Importantly, the UK requires these fees to be paid in one lump sum prior to the SPC coming into force (Schedule 5, UK Patents Act). 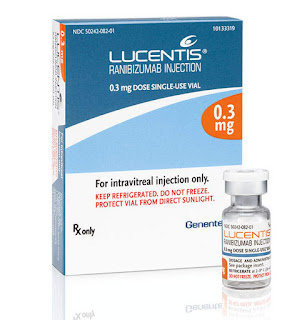 Genentech contracted out the payment of the annuity fees to Master Data [Merpel: apparently this is a patent administration company, not a merger of Star Trek, Doctor Who and Ibsen characters]. Master Data were given standing instructions by Genentech to pay the required fees for the maximum available term of the SPC (i.e. until January 2022).

Unfortunately for Genentech, Master Data did not follow Genentech's instructions to pay the fees for the full term of the SPC (almost 4 years). Instead, Master Data only paid the fees for 2 years of the SPC term. Master Data accepted that the underpayment of the fees was an error on their part. Given that the only fees paid were for only a 2-year term, the UKIPO determined that the SPC would lapse in April 2020, instead of January 2022.

To make matters worse, had the full-term of fees been paid, the SPC term may have been extendable to July 2022 using a paediatric extension. SPC terms can be extended a further 6 months using such a paediatric extension, the purpose of which is to reward the extra work required for obtaining marketing authorisation for the paediatric population. As a result of Master Data's errors, Genentech's SPC term for Lucentis was thus effectively halved.

Master Data: Underpayment of the fees should not have been permitted

Master Data argued in the UK High Court that no one should be allowed to shorten the permitted SPC term (e.g. by underpaying the fees). The term of the SPC, Master Data argued, is determined solely by Article 13 of the SPC Regulation. Article 13 sets out the term available for an SPC based on patent filing date and the date of the marketing authorisation. Master Data therefore argued that the UK IPO should therefore not have permitted Genentech to shorten the term of their SPC by only paying the fee for a 2 year term. Master Data insisted that the UKIPO should have sent them a reminder about the fees. Remarkably, Master Data noted that the UKIPO had in the past notified them when they had underpaid SPC fees, on at least 2 previous occasions of underpayment by Master Data.

The High Court disagreed with Master Data’s argument. The Judge (Recorder Douglas Campbell QC) found that the UK IPO were in fact “properly open” to allow applicants to shorten their SPC term. The Judge particularly argued that the term of the SPC was governed not only by Article 13, but also Article 14. Article 14 relates to the expiry of SPCs, and particularly specifies that the SPC will lapse if the required annual fee is not paid.  The Judge followed the reasoning of Lord Justice Kitchin (as then was) in Tulane v Comptroller ([2013] EWCA Civ 890), that the lump fees were “annual fees” as specified by Article 14. As such, the Judge concluded that “it must be open to a patentee to elect to pay only for the period he desires” (para. 38), after which it will expiry pursuant to Article 14(c) SPC Regulation. The Judge thus rejected Master Data’s appeal.

Genentech: Payment of additional SPC fees should be allowed with payment of the paediatric extension fee

The Judge was not convinced by Genentech’s argument. In particular, it seemed to the Judge that “the natural and ordinary interpretation of rule 116(5)…is that when the application for extension is made, the applicant is permitted, and only permitted, to pay for the paediatric extension itself” (para. 49, Judge’s emphasis). The Judge also noted that there is no reason why an SPC holder who is entitled to a paediatric extension should be uniquely privileged in relation to unpaid annual fees compared to those not entitled to a paediatric extension. Putting it rather bluntly, the Judge noted that “[e]veryone else has to put their money where their mouth is” (para. 50).

The decision by the UKIPO not to permit late payment of the fees does seem a little harsh, given the consequences for Genentech and Master Data (against whom Genentech might seek an indemnity). Genentech argued that the UKIPO should therefore have used their discretion in allowing the annual fees to be paid later.

The Judge agreed with Genentech that, had the correction been allowed, and the SPC term thus effectively doubled, the potential effects on third parties could be "sufficiently addressed by advertising it" and by providing third parties with the opportunity to comment. However, the Judge did not think that the mere the consequences of the mistake for Genentech and Master Data justified the use of discretion. Furthermore, the fact that neither Genentech nor Master Data intentionally wished to shorten the SPC term changed the fact that the mistake had been made. To the Judge, the most important factor in whether discretion should be exercised was that "this was the third time Master Data had made the same mistake". The Judge noted that:


Master Data kept on making the same mistake despite the UKIPO 'going the extra mile' to point out the mistake the first two times...I accept that this was the mistake of Genentech's agent rather than Genentech itself but nothing turns on that since Genentech had appointed Master Data as its agent for this purpose

The Judge therefore dismissed the appeals of both Master Data and Genentech.

To the court, this was one instance when the meaning of the Articles of the SPC Regulation was unequivocal.
If once is a misfortune and twice is careless, three times is…? Genentech loses UK SPC for Lucentis due to costly procedural error

Reviewed by Rose Hughes on Monday, March 23, 2020 Rating: 5
The IPKat licenses the use of its blog posts under a Creative Commons Attribution-Non Commercial Licence.