Justice Ruth Bader Ginsburg, of the US Supreme Court, passed away on Friday 18th September 2020, just before the beginning of Rosh Hashanah, which according to the tenets of her Jewish faith, is the hour of death for the most righteous souls. And that she was. Her life was dedicated to seeing that justice was done. She was a women with a formidable sense of justice, and the gumption and tenacity to change history.

"Fight for the things you care about, but do it in a way that will lead others to join you"

Ruth led an extraordinary life. In 1956 she enrolled as one of nine women in a class of 500 men. She famously took her own classes on top of those of her husband, who was unwell, whilst simultaneously caring for him, their daughter and editing the Harvard Law Review!

In the early 1970s she became the director of the Women’s Rights Project at the American Civil Liberties Union, where she succeeded in five gender equality cases at the Supreme Court. She was the second women to be appointed to the US Supreme Court. (See the obituary by Nina Totenberg for a thorough account of Ruth’s triumphs).

With her progressive views on social issues including abortion, immigration, healthcare, and equality, she was a torch bearer that blazed through hundreds of restrictive laws to change the world for women and the marginalised and disempowered. She became a legal, cultural and feminist icon, featuring in the poignant movie ‘On The Basis of Sex’ in 2018, and the subject of a documentary which led to her being crowned the Notorious RBG.

"Women belong in all the places where decision are being made"

She not only leaves behind this heroic legacy, but her family, including two children. James Ginsburg, a music producer and her daughter, Jane Ginsburg who is a lawyer and Professor specialising in intellectual property law, no doubt inspired by her mother.

Ginsburg also made her mark on intellectual property law, from patent law decisions such as Microsoft Corp v AT&T, to copyright in Eldred v Ashcroft. She dissented in the decision of Georgia v. Public.Resource.Org that dealt with eligibility of copyright protection, stating that the non-authoritative status of annotations indicated that the creation of the annotations would fall outside of legislative duties.And even more recently, she authored the long-awaited decision regarding the "Booking.com" service mark, in United States Patent and Trademark Office v. Booking.com. 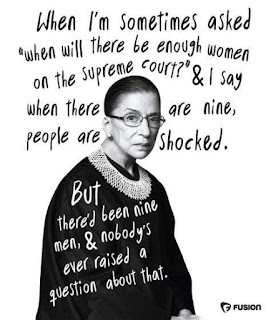 As we reflect with admiration for RBG and her legacy, many are also filled with fear for what could happen now that her position is vacant. Just days before her death, she dictated a statement to her granddaughter Clara Spera saying:

"My most fervent wish is that I will not be replaced until a new president is installed."

Although, thanks to Ruth Ginsburg’s dedication to justice, there is hope. Alexandria Ocasio-Cortez highlighting this in her response “It is heartbreaking that in her final moments she was, as are many others, preoccupied with what would happen after her passing. I want to make one thing clear: we can, and must, fight.”

And we will. The IPKat team sends its heartfelt condolences to Justice Ginsburg's family and friends and to everyone who found strength in Justice Ginsburg. Her legacy of equality, compassion, intellectual and civil debate and respect for the rule of law will live on in us.

Reviewed by Hayleigh Bosher on Saturday, September 19, 2020 Rating: 5
The IPKat licenses the use of its blog posts under a Creative Commons Attribution-Non Commercial Licence.