InternKats: Sophie Corke, Magdaleen Jooste, and Anastasiia Kyrylenko.
Home #IPKat Aktiebolaget Östgötatrafiken v Patent-och registreringsverket EU Trade Mark Directive Nedim Malovic Sweden trade mark / CJEU says that the assessment of distinctiveness of signs that are to be applied to specific goods used to deliver a service should not also entail an assessment of norms and/or customs of the relevant sector

Nedim Malovic Sunday, October 11, 2020 - #IPKat, Aktiebolaget Östgötatrafiken v Patent-och registreringsverket, EU Trade Mark Directive, Nedim Malovic, Sweden, trade mark
Should the distinctiveness (under what is now Article 4(1)(b) of Directive 2015/2436 (the EU Trade Mark Directive)) of a sign that is to be applied to specific goods be assessed having regard to what is customary in the relevant sector? This, in a nutshell, is the question that the Court of Justice of the European Union (CJEU) was asked in a recent referral for a preliminary ruling from Sweden.
The Court answered it in the negative in this week’s judgment in Aktiebolaget Östgötatrafiken v Patent-och registreringsverket, C‑456/19.
The judgment is relevant in that it clarifies that the assessment of a sign’s distinctiveness should not always entail an assessment of norms and/or customs of the relevant economic sector .. at least under the 2008 Trade Mark Directive.
Background
In November 2016, Östgötatrafiken (the Applicant), sought to register the following figurative signs as Swedish trade marks (please note that the marks applied for were accompanied by further images): 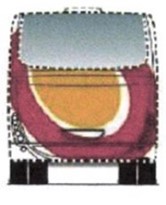 Registration was sought for various services provided by means of vehicles and transport in Class 39 of the Nice Classification. The applications were accompanied by a description stating: “Colouring of vehicles in the colours red, white and orange, as shown”. Importantly, the protection applied for did not relate to the shape of the vehicles.
In August 2017, the Swedish Patent and Registration Office (PRV) rejected the applications on the ground that the signs in question were merely decorative, and – as such – could not be perceived as capable of distinguishing the services covered by those applications.
The Applicant unsuccessfully appealed to the Swedish Patent and Market Court. This court dismissed the action since it could not be established that the colours and shape of the signs departed significantly from the manner in which other undertakings decorate their vehicles.
The Applicant further appealed to the Swedish Patent and Market Court of Appeal, which decided to stay the proceedings and refer the following questions to the CJEU for a preliminary ruling:

(1) Must Article 4(1)(b) of the EU Trade Mark Directive be interpreted as meaning that, in the case of an application for registration of a trade mark which designates services and where the application relates to a sign, placed in a particular position, which covers large areas of the physical objects used to perform the services, it must be assessed whether the mark is not independent of the appearance of the objects concerned?
(2) If the first question is answered in the affirmative, is it necessary for the trade mark to depart significantly from the norm or customs of the economic sector concerned in order for the mark to be regarded as having distinctive character?
The CJEU’s findings
Having considered that the relevant Trade Mark Directive would still be the 2008 Directive, the CJEU noted that it follows from the settled case law that the essential function of a trade mark is to indicate origin (Hansson, C‑705/17). That distinctive character, within the meaning of Article 4 of the Trade Mark Directive, must be assessed by reference the goods or services in respect of which registration is sought and the perception of the relevant public, namely the average consumer of the category of goods or services in question, who is reasonably well informed and reasonably observant and circumspect (Deutsches Patent- und Markenamt (#darferdas?), C‑541/18). Furthermore, in order to assess the distinctive character of a sign, the competent authority must carry out an examination by reference to the use made of that sign (Hartwall, C‑578/17).
However, where the trade mark application concerns a sign intended to be affixed exclusively and systematically in a specific manner to a large part of the goods used to provide the services, the distinctive character of that sign cannot be assessed independently of the perception of the relevant public of the affixing of that sign to those goods. Even if the goods which are used to provide the services are not the subject of the trade mark application, the fact remains that the relevant public perceives the colour motifs of which the sign in question consists as being affixed to the goods which serve as their exclusive medium.
In this sense, it would be for the referring court to determine whether systematically arranged colour combinations are capable of conferring inherent distinctive character on the signs in question. That condition must be regarded as satisfied if it emerges that the colour combinations applied to the transport vehicles enable the average consumer to distinguish, without any confusion, between the transport services provided by that undertaking and those provided by other undertakings.
Importantly, under the 2008 Directive, the criterion for assessment of whether there is a significant departure from the norm or customs of the economic sector concerned applies where the sign consists of the shape of the product for which registration as a trade mark is sought. It also applies where the sign consists of the representation of the layout of the physical space in which the services in respect of which registration as a trade mark is sought are provided (Apple, C‑421/13). However, it does not always apply.
In fact, such a situation would not arise in a case like the one at hand, since those signs consist of colour compositions which are systematically arranged and spatially limited. Additionally, their purpose is not to represent the physical space in which the services are provided. The signs relate to clearly defined graphic elements and are not intended to represent goods or an area for the provision of services by the mere reproduction of the lines and the contours. Therefore, the distinctiveness of the signs in question must be assessed by taking into account the perception of the relevant public, without it being necessary to examine whether that sign departs significantly from the norm or customs of the economic sector concerned.
CJEU says that the assessment of distinctiveness of signs that are to be applied to specific goods used to deliver a service should not also entail an assessment of norms and/or customs of the relevant sector

Reviewed by Nedim Malovic on Sunday, October 11, 2020 Rating: 5
The IPKat licenses the use of its blog posts under a Creative Commons Attribution-Non Commercial Licence.