Two Arnolds for the price of one (part 1)

Lord Justice Arnold's work-rate is the stuff of legend, so it is perhaps unsurprising that we have recently been treated to not one, but two, Court of Appeal judgments delivered by Arnold LJ, on the same day.

Both cases relate to confidential information, a relatively unloved (but often hugely valuable) IP right. The first case, Shenzhen Senior Technology Material Co Ltd v Celgard, LLC [2020] EWCA Civ 1293, is a relatively "traditional" claim involving alleged theft and misuse of trade secrets by a former employee and his new employer, with interesting legal questions arising largely due to the multi-jurisdictional nature of the dispute. The second case, The Racing Partnership Limited and Ors v Sports Information Services Limited [2020] EWCA Civ 1300, serves up a fascinating application of the equitable doctrine of breach of confidence / misuse of confidential information (specifically, sports betting data), a sprinkling of the tort of conspiracy to injure by unlawful means, and firm ground on which to trot out some really hacked-up horse puns [more on that next time].

Ahem. Back to Celgard's trade secrets.

The key facts of the dispute are summarised in the IPKat's post on the first instance judgment. US-based Celgard (claimant/respondent) and China-based Senior (defendant/appellant) are rival manufacturers of battery separators, which are used in lithium-ion batteries for (among other things) electric vehicles. [No doubt the atmosphere in the courtroom was electric.]

A former R&D employee of Celgard (Dr Zhang) joined Senior in early 2017, following which Senior quickly expanded its range of products, gained market share and (allegedly) changed the formulation of a particular binder used in its products. Celgard said this was all because of unlawful disclosure and use of its trade secrets.

Celgard brought proceedings against Senior in the English High Court earlier this year, shortly after Celgard learned from a UK-based customer (with which Celgard was negotiating a significant new contract) that the customer was looking at Senior as a potential supplier. Celgard, concerned that it would be undercut if Senior became a "qualified" supplier, sought an interim injunction to restrain Senior from supplying sample separators to the customer. Celgard's claim is based on breach of an equitable obligation of confidence and/or breach of Regulation 3 of the Trade Secrets (Enforcement, etc.) Regulations 2018, which partially implement the Trade Secrets Directive in the UK.

At first instance, Celgard secured an interim injunction. The judge (Trower J) found that there was a serious issue to be tried; that English law governed the claim as pleaded; and that England and Wales was the proper place to hear the claim.

The Court of Appeal's judgment

Arnold LJ gave the leading judgment, with which Davis LJ and Popplewell LJ agreed. The short summary - which is that the appeal failed - conceals some interesting points to watch in this case, and to note for future practice:

The claim proceeds to trial. This dispute has been hard-fought (perhaps due to the expected future market size for battery technology) and has thrown up a number of interesting legal points, even at this early stage. It is certainly one to watch for further detailed argument and analysis regarding interpretation of the Regulations and Directive, and their interplay with the existing doctrine of misuse of confidential information.

This kind of international trade secrets dispute seems to be increasingly common. It is interesting to note how vigorously Senior has resisted the jurisdiction of the courts of England and Wales and instead argued that China is the proper forum for the dispute. This is in spite of the fact that the Chinese courts - by Senior's own submission - would be empowered to injunct Senior to prevent the exportation of the battery separators to the UK (and other jurisdictions). One can speculate that China would have provided a friendlier forum, but this is - as suggested - only speculation.

This dispute has a clear UK dimension - the possibility of Senior selling to a UK customer - so it seems logical that the English court should have jurisdiction to hear the dispute. As one would expect, the claim seems to have been pleaded carefully in order to maximise the likelihood of this result (and, notably, Arnold LJ seemed to have doubts regarding the English court's jurisdiction to hear the element of the action concerned with Senior's potential vicarious liability for Dr Zhang's alleged misappropriation of the trade secrets, which took place in the US and China). 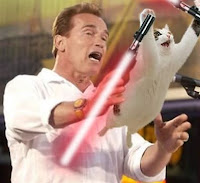 A possibly different Arnold, and a cat wielding lightsabers, yesterday. Perfectly normal.
Two Arnolds for the price of one (part 1)

Reviewed by Alex Woolgar on Wednesday, October 28, 2020 Rating: 5
The IPKat licenses the use of its blog posts under a Creative Commons Attribution-Non Commercial Licence.