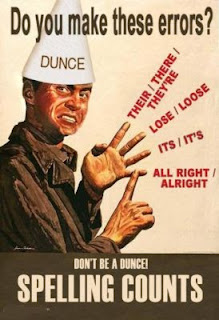 Mind your Ps and Qs! Via a tweet from Mitt Putk comes news of "The Impact of Spelling Errors on Patent Search", a paper by Benno Stein and Dennis Hoppe and Tim Gollub (Bauhaus-Universität Weimar, Germany).  According to the abstract:


"The search in patent databases is a risky business compared to the search in other domains. A single document that is relevant but overlooked during a patent search can turn into an expensive proposition. While recent research engages in specialized models and algorithms to improve the effectiveness of patent retrieval, we bring another aspect into focus: the detection and exploitation of patent inconsistencies. In particular, we analyze spelling errors in the assignee ﬁeld of patents granted by the United States Patent & Trademark Ofﬁce. We introduce technology in order to improve retrieval effectiveness despite the presence of typographical ambiguities. In this regard, we (1) quantify spelling errors in terms of edit distance and phonological dissimilarity and (2) render error detection as a learning problem that combines word dissimilarities with patent meta-features. For the task of ﬁnding all patents of a company, our approach improves recall from 96.7% (when using a state-of-the-art patent search engine) to 99.5%, while precision is compromised by only 3.7%".

Given his affection for proper spelling, the IPKat just couldn't resist it! He would however remind readers that not all variations in spelling are the result of error: vitamin/vitamine and adrenalin/adrenaline  are just two examples of national preference.


"The YouTube case (see earlier Katposts here and here) is just the tip of the iceberg and shows that collecting societies are not performing to the extent possible", says the IPKat's friend and scholar Dr Roya Ghafele who, in this context, drews his attention to "Counting the Costs of Collective Rights Management of Music Copyright in Europe". This is a study by Roya together with Benjamin Gilbert. According to the abstract:
"The identification and clearance of music copyright is a complex process that suffers from high transaction costs when managed by individual rightsholders. The pooling of music copyright in collective rights management organizations has historically reduced these costs, while providing a larger, and thus more attractive, repertoire to commercial users via the issuance of blanket licences. However, the development of digital distribution channels and automated clearance technologies for music copyright across multiple borders presents a number of challenges to the current system. As music consumption increasingly takes digital forms, Europe must modernize its collective rights management system in response.


The results of this study show there is a very large market for digital music in Europe. As broadband penetration increases and competition amongst Internet Service Providers (ISPs) in Europe enhances access to the Internet, this market will grow rapidly. The market is valued at over 2.6 billion Euro in France, Germany and the UK alone. This constitutes a potential royalty market of 212 million Euro. Yet, only 49 million Euro in royalty revenue from online sources was collected by SACEM, GEMA and PRS for Music. Moreover, the majority of this revenue was collected by PRS for Music in the UK, which is the smallest of the three markets but by far the most efficient CRMO for the collection of royalties from online sources. Other nations in Europe, though significantly smaller, still represent a valuable market opportunity.

The disparity between potential and actual revenue for all of the European markets suggests there are problems with the current collective rights management system. The percentage of the royalty market captured in the USA was over 4% more than the European average. New solutions should be sought to capitalize on the market opportunity of digital music services in light of increasing broadband penetration and changing consumer patterns in Europe. This should help unlock the potential of digital music markets, consolidate the single European market, increase competition in the administration of collective rights, and provide better services to European consumers".

Thanks, Roya: it's always good to have real statistics and analysis with which to bolster one's arguments.


Around the weblogs.  The annual SPC Blog seminar is now taking bookings: it's fun, it's free and it's taking place on Tuesday 22 May in the lovely London offices of long-suffering Olswang LLP -- who must be thinking that their facilities have been principally designed for hosting blog seminars for the wider IP community. Details of the seminar can be found on The SPC Blog here.  Still on the subject of SPCs and patent term extension, there's a cogent note by Michel Giannino on the Italian competition authority's hard line on trying to use patent rights in order to extend protection to pharma products here on the jiplp weblog.  There may be magic in Eleonora Rosati's 1709 Blog posts, but is there copyight in magic, she asks. Click here to find out why she asks.  And for those who enjoy a really clever retort in the world of spoof ads, Darren Olivier's post for Afro-IP on the sweet little spat between Nando's and Santam takes some beating.

The Copyright Clearance Center has been busy again.  Its  newest “Beyond the Book” podcast features Billboard’s former executive editor Robert Levine. At the recent OnCopyright 2012 conference ("Advancing the Creative Economy"), Robert explained for the audience in a keynote speech how the commonly used language of copyright shapes the debate [this is a popular theme: this Kat remembers Bill Patry elaborating on it most entertainingly in his Stephen Stewart Lecture, "Metaphors and Moral Panics", here] and makes for confusion on the fundamentals. He details how the copyright debate should be treated as an economic and legal discussion, as opposed to a moral issue, and defines the role of the critical term "infringement" in the debate." You can access it by podcast and by transcript.

Superficial similarity.  The British Brands Group has been tireless in its efforts to raise public awareness of competing products with relatively or indeed highly similar get-up.  This exercise must be a worthwhile one, whether it leads to new legislation, to more self-control on the part of traders or merely to the IPKat managing not to put the wrong product into their supermarket basket [Merpel, who never admits to making mistakes, always maintains she meant to buy the look-alike product in the first place ...]. Anyway, all you have to do is click here, and you will be effortlessly transported to the bit of the BBG's website which hosts the latest batch of similars.  If readers have any favourite examples of their own, they should let John Noble know by emailing him here.


AmCham in Slovakia. The Kats have learned from their friend Zuzana Hecko (Allen & Overy) about an early World IP Day event held last week by the American Chamber of Commerce in Slovakia -- an IP-and-business seminar.  Says Zuzana:


"Even though the AmCham booked quite a large room, not one chair remained free. The conference was opened by Jake Slegers, the Executive Director of AmCham Slovakia, followed by a presentation from the European Commission (ACTA master Pedro Velasco), followed by a speech from Jaro Slávik (star of a popular Slovak TV show). Other speakers came from Allen & Overy, Microsoft, Nike, Samsung, O2, the head of the (newly-created) IP department of the Slovak customs and the Head of the Slovak IP office. The audience included rights holders, ISPs, lawyers, telcos, IT and software companies, cloud providers, FMCG, and banks.

The topics of the seminar were divided into four panels. The first focused on what intellectual property is. Not surprisingly, as Slovakia is a "home" for many cloud providers and IT companies, cloud computing provoked an interesting discussion. Another subject which caught the participants’ attention was plain packaging -- which was criticised by the majority of those present. The second panel dealt with the protection of IP on the internet, and focused on the responsibility of ISPs. The third focused on the protection of IP through customs measures. Not many people may be aware that in Slovakia, customs have a mandate to act not only at the borders, but also in the internal market (a special application for action is necessary) and that the chances of fakes being detained by the customs are much higher in the domestic market than on the border (last year there were 2520 detentions in the domestic market compared to a modest 142 cases on the border). The customs stated that cooperation with companies which apply zero tolerance is good, however it is problematic in those other cases where because of a lack of interest from the rights holder to take action, (fake) goods are returned to the holder. Slovak customs are currently also exploring whether the holder of the goods/declarant, besides the destruction of its goods in the simplified procedure, could also be fined. The fourth panel was devoted to trade mark protection in Slovakia (believe it or not, there are still many companies in Slovakia which have operated for years without any trade mark registrations). It is hoped that this seminar will have served as a wake-up call for companies who have not yet considered IP important enough to better protect their IP assets and move towards compliance".

Reviewed by Jeremy on Wednesday, April 25, 2012 Rating: 5
The IPKat licenses the use of its blog posts under a Creative Commons Attribution-Non Commercial Licence.