Tara Aaron Friday, April 20, 2012 - disturbance liability, German copyright law, Internet filters, Regional Court of Hamburg, YouTube
This U.S. Kat rarely meows about European IP issues.  There are much more knowledgeable Kats in this herd to discuss the goings-on on the other side of the Atlantic.   But this is breaking news which was brought to this Kat’s attention this morning, and lines up interestingly in light of the “Google For Entrepreneurs” event this Kat attended in Nashville, Tennessee yesterday and Google's current legal position in the U.S.

The details are limited for a Kat who can’t read the German-language court opinion, but according to U.S. news, a German Court in Hamburg today ruled against YouTube in its case with GEMA, the German performing rights organization.  YouTube and GEMA had thus far been unable to settle on the rate YouTube would pay for the performance of copyrighted music on its site.  Specifically, GEMA sued over twelve uploaded videos for which no licensing fees had been paid.  The court in Hamburg sided with GEMA, and has ordered YouTube to install the filtering software which YouTube has resisted so strongly for so long.  The software must filter uploaded videos for infringements according to key words, such as the name of the artist or the song title.  It is not clear from the information available to this Kat at the time whether this search will be based upon key words actually supplied by the users when tagging the videos or in other metadata in the video.  Obviously, this will have an impact on the efficacy of any such filtering software against a particularly determined uploader.
Notably, the German court appears to have stated that it does not consider YouTube the copyright violator.  Instead, the infringer is the user who uploaded the song.  This makes this U.S. Kat question the basis on which an order to take affirmative steps to prevent infringement can be levied against YouTube, and would be happy to hear thoughts from European counsel on that.
The specific ruling that YouTube is not the copyright infringer may end up in direct contradiction with the pending Viacom v. YouTube case in the U.S. to which the ever-alert Amerikat has already introduced you.  (This Kat’s law partner has also analyzed the case in a two-part analysis that can be read here and here.)  In the U.S. under the Digital Millennium Copyright Act, service providers may be held liable for the infringing files uploaded to their services by users, unless they follow specific procedures for taking down such content and are not and should not be aware of the infringement occurring on their site.  This Act specifically states that there is no requirement to “police the site,” which presumably means no court can order that filtering technology be used.  YouTube’s obligations of investigation, then, are very unlikely to extend into the borders of the U.S.
The Second Circuit has sent the question of YouTube’s knowledge back down to the District Court for consideration, and if YouTube’s knowledge evicts it from the safe harbor provided in the Digital Millennium Copyright Act, its liability for infringement could be breathtaking. 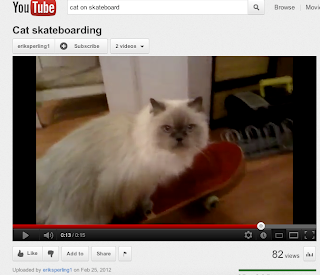 At the event in Nashville yesterday where Google employees (called “Googlers”) came to talk about Google’s tools for entrepreneurs, the subject of YouTube’s DMCA policy came up in a question.  The Googler’s response was, “We have to be careful at YouTube.  Viacom’s still in court with us and we want to be in business next year.”  Such a statement struck this Kat as, well, stunning.  Of course, YouTube and Viacom will likely settle.  No one, not even Viacom, wants YouTube out of business (or so this Kat believes).  But it does appear that Google’s forward momentum may being slowed a bit.
YouTube Hits a Wall Near Berlin; Googlers Concerned

Reviewed by Tara Aaron on Friday, April 20, 2012 Rating: 5
The IPKat licenses the use of its blog posts under a Creative Commons Attribution-Non Commercial Licence.