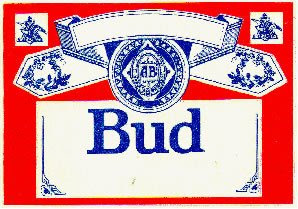 It's not often that a decision of the Court of First Instance of the European Communities on a Community trade mark matter runs to 207 paragraphs and has its own Table of Contents (inconveniently situated at the end of the decision, where you might not immediately think of looking for it), but this morning's ruling in Joined Cases T-225/06, T-255/06, T-257/06 and T-309/06 Budějovický Budvar, národní podnik v Office for Harmonisation in the Internal Market, Anheuser-Busch, Inc. is one such case.

In short, Anheuser-Busch, Inc. applied to register as a Community trade mark the sign illustrated on the right for goods in Classes 16, 21, 25 and 32. It also filed three applications to register the word BUD in Classes 32 (beers), 33 (alcoholic beverages), 35 (setting up databases, gathering data and information in databases), 38 9 (telecommunications, ie making available and supplying data and information, supplying and communicating information stored in databases), 41 (education, entertainment) and 42 (restaurant, bar and pub services; operating a database).

As is traditional in these matters, Budvar opposed, citing (i) the figurative Bud mark illustrated here for ‘all types of light and dark beer’, effective in Austria, Benelux and Italy; (ii) the appellation of origin ‘bud’, registered, under the Lisbon Agreement, on 10 March 1975 with the World Intellectual Property Organisation (WIPO) in respect of beer and effective in France, Italy and Portugal; (iii) an Austrian appellation of origin ‘bud’ protected in Austria under a bilateral convention with the now-defunct Czechoslovakia.

The Opposition Division partially upheld the opposition filed against registration of the trade mark applied for. It considered that Budvar had demonstrated that it had a right to the appellation of origin ‘bud’ in France, Italy and Portugal, though in relation to Italy and Portugal the arguments put forward by Budvar were not specific enough to determine the scope of its protection under the national law. It found that the ‘restaurant, bar and pub services’ covered by one of the applications were similar to the ‘beer’ covered by the appellation of origin ‘bud’, there being a likelihood of confusion given that the signs concerned were identical. However, in respect of the other goods, and in the context of the applicable French law, Budvar had failed to demonstrate how the use of the mark applied for was likely to weaken or undermine the reputation of the appellation of origin concerned, when the goods covered were different. Thus the Opposition Division upheld the opposition filed only in respect of ‘restaurant, bar and pub services’ covered by Anheuser-Busch's fourth application. All other grounds of opposition against the other three applications were dismissed.

Both parties appealed, the Board of Appeal dismissing all Budvar's appeals and allowing that of Anheuser-Busch. It considered that Budvar no longer appeared to refer to its international figurative mark as the basis of its opposition, but solely to the appellation of origin ‘bud’ -- but it was difficult to see how 'bud' could be considered to be an appellation (or designation) of origin, or even an indirect indication of geographical origin [a French court had actually ruled the appellation 'bud' under the Lisbon Agreement to be invalid, in proceedings that were themselves under appeal]. The Board also held that the evidence provided by Budvar to show use of the appellation of origin ‘bud’ in Austria, France, Italy and Portugal was insufficient. Thirdly, it held that the opposition failed on the ground that Budvar had not demonstrated that the appellation of origin in question gave it the right to prohibit use of the word ‘bud’ as a trade mark in Austria or France.

This morning brought some good news for Budvar, as the Court of First Instance, consolidating all four appeals, annulled the decisions of the Board of Appeal. To add insult to injury, Anheuser-Busch was ordered to pay one third of Budvar's costs, the other two-thirds being met by OHIM. According to the Court, the protection of 'bud' under the Lisbon Agreement could not be disregarded:

88 ... Community law relating to trade marks does not replace the laws of the Member States on trade marks ... Accordingly, the Court of First Instance has held that the validity of a national trade mark may not be called in question in proceedings for registration of a Community trade mark ...

89 It follows that the system ... presupposes that OHIM takes into account the existence of earlier rights which are protected at national level. Accordingly, ... the proprietor of another sign used in the course of trade of more than mere local significance and which is effective in a Member State may, subject to the specified conditions, oppose the registration of a Community trade mark ...

90 Since the effects of the appellation of origin ‘bud’ have not been declared definitively to be invalid in France, the Board of Appeal ought ... to have taken account of the relevant national law and the registration made under the Lisbon Agreement, and did not have the power to call in question the fact that the claimed earlier right was an ‘appellation of origin’.

91 ... if the Board of Appeal had serious doubts as to whether the earlier right could be classified as an ‘appellation of origin’ and therefore as to the protection to be afforded to it under the national law relied on, when that issue was in fact the subject of court proceedings in France, the Board was entitled ... to suspend the opposition proceedings until a final judgment on the matter was delivered".

The bilateral treaty between Austria and Czechoslovakia also provided protection for the appellation 'bud':

"98 ... the bilateral convention is still effective in Austria for the purposes of protecting the appellation ‘bud’. In particular, the documents lodged in the proceedings do not show that the Austrian courts have held that Austria or the Czech Republic did not intend to apply the principle of the continuity of treaties to the bilateral convention, following the break-up of the Czechoslovak Socialist Republic. Moreover, there is no indication that Austria or the Czech Republic have denounced that convention. In addition, the ongoing proceedings in Austria have not led to the adoption of a final judicial decision. ... the Board of Appeal ought to have taken into account ... Budvar’s claimed earlier right without calling in question the actual classification of that right".

The Court added that, while an earlier trade mark right upon which an opposition is based may be discounted if that trade mark has not been the subject of genuine use, the same does not apply to oppositions founded on a non-registered trade mark or another sign used in the course of trade of more than mere local significance. Accordingly,

"... under Article 8(4) of Regulation No 40/94, it is possible for certain signs not to lose the rights attached to them, notwithstanding the fact that no ‘genuine’ use is made of them. ... an appellation of origin registered under the Lisbon Agreement cannot be deemed to have become generic, as long as it is protected as an appellation of origin in the country of origin. Moreover, the protection conferred on the appellation of origin is ensured without renewal of registration ... That does not mean that it is possible not to use the sign relied on ... However, the opposing party need do no more than show that the sign concerned was used in the context of a commercial activity with a view to economic advantage, and need not prove that the sign has been put to genuine use ...".

The IPKat found this decision a compelling read, not least because he must confess that he had little expectation that Budvar would come out of this with anything more positive than a large bill for costs. A careful reading of the cited sources does however suggest that the CFI has got it right. He also suspects that, given the issues of money and principle at stake, there will be a further appeal. Merpel finds herself thinking how sad it is that, while the law on trade marks and the law on appellations serve similar purposes from the consumer's point of view, the former is underpinned by a doctrine of "essential function" while the latter is not.
'Bud' appellation still alive and kicking, says CFI

Reviewed by Jeremy on Tuesday, December 16, 2008 Rating: 5
The IPKat licenses the use of its blog posts under a Creative Commons Attribution-Non Commercial Licence.