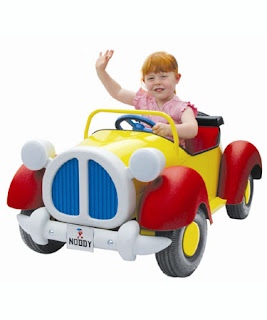 Over the past couple of weeks the IPKat has been following (here and here) the unfortunate chain of events which have led to a major copyright-owning computer games company and a respectable firm of solicitors receiving substantial flak for their attempts to enforce copyright in Atari's Race 07 game.

Right: Atari are rumoured to be planning a junior version of Race 07 for those too young to share files.

Events continue apace. The Consumers' Association's magazine Which? -- a venerable national institution in its own right -- has complained to the Solicitors Regulatory Authority that

"Davenport Lyons has been hunting for internet users who it believes have illegally shared copies of video games. The alleged file-sharers received letters from the law firm demanding payment of £500 compensation for copyright infringement.

Downloading video games
A recent Which? Computing investigation found that while working with games firm Atari, Davenport Lyons wrongly accused a Scottish couple, aged 54 and 66, of infringing copyright of a game ‘Race O7’. Since then, Atari has severed ties with the law firm. But Which? Computing has evidence from people who, after repeated letters from Davenport Lyons, have been scared into paying compensation for something they say they did not do.

William Snow is once such consumer. He wrote to Davenport Lyons to deny sharing the Atari game Test Drive Unlimited but his evidence was ignored. He has now cancelled his broadband connection for fear of the same thing happening again.

File sharing
In a letter to the Solicitors Regulatory Authority (SRA), Which? says it believes the conduct of Davenport Lyons, while acting for its clients, has been ‘bullying’ and ‘excessive.’

Which? draws attention to the fact that Davenport Lyons’ letters to alleged file sharers: make incorrect assertions about the nature of copyright infringement; ignore the evidence presented in defence; and increase the level of compensation claimed over the period of correspondence. In addition, the letters threaten, incorrectly, that failing to properly secure an internet connection is grounds for legal action.

Which? Head of Legal Affairs Deborah Prince urges the SRA to take urgent action against Davenport Lyons and adds that, in the current financial climate, her organisation expects an increase in the action that companies may want to take against individuals. She then invites recipients of letters from Davenport Lyons who believe they have been wrongly accused to email Which? here.

At this stage it looks like it's all one-way traffic and that Davenport Lyons had better rebrand itself with a cuddly new name. But the firm has come out fighting since, it seems, there may be more than one side to the argument. In a press release at the end of last week it stated:

"We have seen the press release put out by Which? stating that they have written to the Solicitors Regulation Authority ('SRA') complaining of our conduct in relation to the file sharing litigation we have been undertaking for various copyright owners. Subsequently we have seen the letter that Which? has sent to the SRA. We do not propose to comment directly on this letter as we do not want to prejudice any SRA investigation with which we will fully co-operate. We are confident that we have not breached SRA rules. What we will say is that Which?'s letter to the SRA contains a number of errors, misstatements and assumptions that are simply incorrect.

We cannot speculate on Which?'s decision to take this course of action but note that the letter to the SRA specifically states their intention to engage with the media. We are surprised that Which?, a consumer group, should wish to attack so strongly a scheme which is designed to protect copyright, the theft and/or unlawful misappropriation of which costs consumers each year. Which? says it is acting on behalf of consumers generally, but we wonder how many consumers are frustrated that they continually purchase music, film and games legally while others make that copyright material available for others to download for free. The honest consumer ends up paying in the end.

The starting point for our actions is that our clients have a legitimate right to protect.

Our clients own copyright in works that are made available on peer-to-peer networks where they are downloaded by others for free. This practice is causing our clients significant loss and to combat it they have engaged experts to identify, using reliable methods of detection, the IP addresses used at the time our clients' copyright material was made available on peer-to-peer networks. Acting on instructions, when those IP addresses are supplied to us, we apply to the High Court for an order that the relevant internet service provider discloses the name and address of the individual responsible for the IP address. We then write to the individuals whose IP address has been identified, setting out our client's claim which, as it is a civil action, we will need to prove on a balance of probabilities. We give those individuals to whom we write the option of settling the matter for a sum which is a fraction of the loss suffered by our client. We explain that if the early offer to settle is not accepted, we will issue proceedings subject to any submissions the individual may wish to make. We take full account of those submissions before deciding our next step. Which? has accused us of ignoring evidence in defence. This is untrue and we wonder how Which? could purport to know this or our state of mind.

We requested some information from Which? as soon as we became aware of their press release but we are yet to receive a substantive response to our request. We will await such a response before deciding on the steps that we take next".

The IPKat notes that what should have been Atari v Mr Infringer has ended up as Which? v Davenport Lyons. This is all very uncomfortable. As a believer that (i) copyright should be enforced, (ii) solicitors are obliged to do the best for their clients within responsible and lawful bounds, (iii) the SLA must take a well-rounded view of solicitors' conduct that takes due account of the public's interest as well as the proprieties of practice and that (iv) Which? plays a vital part in exposing wrongs, he feels that he is pulled in several conflicting directions here. Merpel says she feels most insulted: no-one has sent her any threatening letters, despite the fact that she has assiduously refrained from infringing any copyright in Race 07.
Which? v Davenport Lyons -- the saga continues

Reviewed by Jeremy on Saturday, December 13, 2008 Rating: 5
The IPKat licenses the use of its blog posts under a Creative Commons Attribution-Non Commercial Licence.