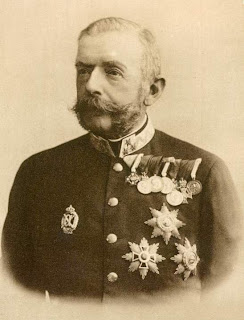 Here's a short, sweet ruling from the Court of Justice of the European Communities in Case C‑442/07, Verein Radetzky-Orden v Bundesvereinigung Kameradschaft ‘Feldmarschall Radetzky’, a reference for a preliminary ruling from the Oberster Patent- und Markensenat (Austria).

The Bundesvereinigung Kameradschaft ‘Feldmarschall Radetzky’ (BKFR) is a body dedicated to the preservation of military traditions, such as memorial services for those who have fallen in combat, remembrance services, military reunions and the upkeep of war memorials. It also performs charitable work, such as the collection of gifts in cash or in kind and their distribution to the needy. The BKFR also owns figurative and word trade marks which represent various badges of honour, registered since 1996 in Classes 37 (maintenance work), 41 (cultural activities) and 42 (now 45), in particular for social services. The BKFR awards orders and decorations that correspond to these trade marks; some of its members wear these orders and decorations at various events and when collecting and distributing donations. The marks are printed on invitations to forthcoming events, on stationery and on the association’s correspondence.

The Radetzky-Orden applied to have the trade marks cancelled on grounds of non-use, maintaining that the BKFR had not used the trade marks commercially during the preceding five years. The Cancellation Section of the Austrian Patent Office agreed and cancelled the registrations. The BKFR appealed to the Oberster Patent- und Markensenat, which decided to stay proceedings and to refer the following question to the Court for a preliminary ruling:

"Is Article 12(1) of [Council Directive 89/104] to be construed as meaning that a trade mark is put to (genuine) use to distinguish goods and services of one undertaking from those of other undertakings in the case where a non-profit-making association uses the trade mark in announcements for events, on business papers and on advertising material and that trade mark is used by the association’s members when collecting and distributing donations inasmuch as those members wear badges featuring that trade mark?".

This morning the Court gave its answer:

"Article 12(1) ... is to be construed as meaning that a trade mark is put to genuine use where a non-profit-making association uses the trade mark, in its relations with the public, in announcements of forthcoming events, on business papers and on advertising material and where the association’s members wear badges featuring that trade mark when collecting and distributing donations".

On the question whether the use by BKFR was genuine, the Court said this:

"16 ... the fact that goods or services are offered on a non-profit-making basis is not decisive.

17 The fact that a charitable association does not seek to make profit does not mean that its objective cannot be to create and, later, to preserve an outlet for its goods or services.

18 ... In modern society, various types of non-profit-making association have sprung up which, at first sight, offer their services free but which, in reality, are financed through subsidies or receive payment in various forms.

19 It cannot be ruled out, therefore, that trade marks registered by a non-profit-making association may have a raison d’être, in that they protect the association against the possible use in business of identical or similar signs by third persons.

20 As long as the association in question uses the marks of which it is the proprietor to identify and promote the goods or services for which they were registered, it is making an actual use of them which constitutes ‘genuine use’ within the meaning of Article 12(1) of the Directive.

21 Where non-profit-making associations register as trade marks signs which they use to identify their goods or their services, they cannot be accused of not making actual use of those marks when in fact they use them for those goods or services".

However, as the Advocate General observed (see IPKat comment here), use of a trade mark by a non-profit-making association during 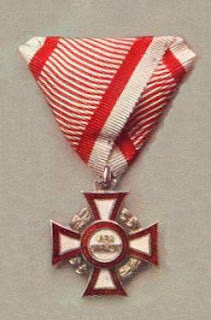 purely private ceremonies or events, or for the advertisement or announcement of such ceremonies or events, constitutes an internal use of the trade mark and not ‘genuine use’. Now the referring court must decide whether the BKFR used the trade marks to identify and promote its goods or its services to the general public or whether it merely made internal use of them.

The IPKat is saddened that money donated for charitable causes is later spent on litigation. Surely the world is big enough for the two parties in this dispute to perform their various good deeds without the need to get involved in disputes like this. Merpel says, but we're not talking about common sense or the wisdom of the marketplace here -- we're talking about cultural heritage, about principle, pride and honour. Where these qualities come into play, financial considerations take second place.

Reviewed by Jeremy on Tuesday, December 09, 2008 Rating: 5
The IPKat licenses the use of its blog posts under a Creative Commons Attribution-Non Commercial Licence.