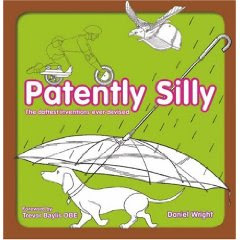 It was very nice of Daniel Wright, creator of the Patently Silly blog, to send me (or rather, my amenuensis) a copy of his book, which happens to have arrived just in time for Christmas.  For anyone who knows someone with a vague interest in patents, and who perhaps has a general mistrust of the whole system, this book could be a good stocking filler (and it's only £5.99 from Amazon).
Ranging from cow afterburners (below) to educational doggy toilets, Daniel has put together a collection of strange, amusing, and often downright weird patents, all of which have been issued by the USPTO after passing their stringent requirements of novelty, non-obviousness and usefulness (or for being a new, original and ornamental design).  My personal favourite is the laser pointer cat-exercising method, though of course it would never fool me.
My only minor gripes about the book are that it concentrates only on US patents, and that it makes no meaningful distinction (except in brief, and in small print in the introduction) between utility patents and design patents.  A reader unfamiliar with the landscape might find it a bit difficult to see how a patent could be granted for a seasonal hat on the same basis as a nuclear waste disposal system.  Mind you, they are still both pretty silly, in their own particular way.
Bibliographic details: ISBN 978-1-85375-684-9. Price: £9.99 (recommended, but see above). Rupture factor: minimal, but make sure you wear your corset, just in case. 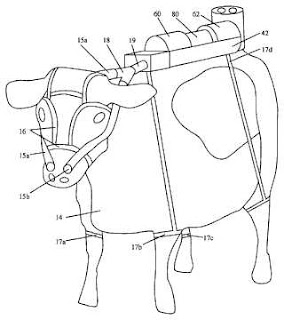 Reviewed by Tufty the Cat on Friday, December 12, 2008 Rating: 5
The IPKat licenses the use of its blog posts under a Creative Commons Attribution-Non Commercial Licence.