Many readers wrote to ask whether there existed a transcript of the powerful speech delivered by Lord Justice Jacob at the European Commission's public meeting last week on the preliminary report of the Inquiry into the Pharma Sector (see IPKat post here). From the IPKat's friend Ian Kirby comes a link to it here -- the video and sound quality are reportedly very good.

Last week the Office for Harmonisation in the Internal Market announced the grant of the 500,000th Community trade mark but, the eagle-eyed IPKat spotted, forgot to tell anyone what it actually was. Apparently the Office's sophisticated trade mark search facilities don't allow it to search for trade marks that are literally under the Office's nose, having only just come into existence at that point. Anyway, there's a happy ending to the story. After hundreds of examiners linked arms and combed every square metre of beach in the hope of finding the mark before it was washed away in the tide, it turned up quite unexpectedly in the men's washrooms where it was threatening to make black marks on the towels. And here it is ... 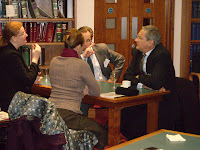 Following yesterday's Rapid Response Seminar on the European Court of Justice ruling on last week's trade mark dilution in Case C-252/07 Intel Corp v CPM (UK) Ltd, jointly run by Class 46 and Hardwicke Building, the PowerPoint presentations of three of the four speakers (covering dilution in France, Germany and the Netherlands), together with a bonus in the form of an additional comment on the impact of Intel v CPM in Poland by Tomasz Rychlicki, specially prepared for the seminar, can be downloaded from the top of the sidebar of the Class 46 website. For the record, the event was a huge success and there are plans for more of the same.
Wednesday wonders

Reviewed by Jeremy on Wednesday, December 03, 2008 Rating: 5
The IPKat licenses the use of its blog posts under a Creative Commons Attribution-Non Commercial Licence.