When tattoos get under your skin: film extras face cover-up or getting peeled

Jeremy Thursday, September 24, 2015 - Copyright infringement, Jeremy Phillips, tattoos
This Kat was approached a little while ago with a question about copyright in tattoos.  This is a subject that this weblog has touched on before [here, here, here and here, among other places], but here's a fresh angle to it.  The story is told by film director Otto Bathurst, aided and abetted by Jenifer Swallow (Mind Candy).  This is how it goes:


"I am a Film Director and was recently working in the States on a movie that was set largely in a prison. Obviously we couldn’t film in a real prison, so we managed to find one that had been recently shut down. Then we had to populate it, so the search for extras began. In my drive for authenticity I naturally wanted lots of the ‘inmates’ to have tattoos on their body, but painting these on is an extremely costly and time-consuming activity, so it made sense to find people who already had tattoos. But then I hit a fascinating legal barrier. To my amazement I was told that anyone who has a tattoo on their body doesn’t actually own the IP to that tattoo, irrespective of who designed it. That tattoo, in fact, belongs to the tattoo artist. Thus to ensure that the film was protected from intellectual property infringement litigation, every extra we employed who had tattoos would have to have a clearance form from the actual artist of each individual tattoo on their body. If they didn’t, we would then have to apply make-up to cover over their tattoo and then re-paint a new tattoo on top (a design for which we had already obtained the copyright).

To describe the full logistical complications of this would be a distraction. What I wanted to try to comprehend was the legality behind this. At this point I deferred to my friend and legal expert, Jenifer Swallow ...

Copyright subsists in the designs for a tattoo as well as in the tattoo itself – it is an artistic work/work of authorship. The tattoo artist is the owner of that ‘work’ unless they transfer the ownership to another. That means they alone have the right to use/exploit it and they can claim legal recourse if it is misused/infringed.

Transferring ownership in an artistic work like a tattoo requires a formal contract – it does not happen automatically. It could be argued that a person commissioning and paying for a tattoo should have rights in it but, without the formal paperwork, the best a person can hope for is an implied licence to use it (a licence to own their own body?) -- but ownership stays with the artist. 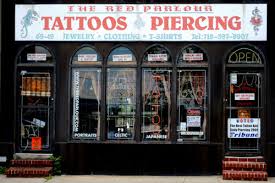 There is a growing body of case law in the US on this subject, derived from a number of high profile cases. For now, those cases are settling out of court, but it is clear the law of copyright applies to original artistic works/works of authorship applied not just to canvas and the like, but to skin. An interesting development to watch for is whether this increasing litigation results in tattoo parlours requiring formal waivers from clients, acknowledging that their tattoos have been created by that particular tattoo artist – essentially signing over rights to their body when they get a tattoo.

So that is the legal aspect. But is there more to it? This recent experience has made me consider that perhaps most people who are having a tattoo aren’t fully aware of the legal position.

Now you could argue that the ownership of the IP of a tattoo is a moot point because clearly the artist can’t physically re-claim the work. However as Jenifer points out the situation is far from clear, the sands are shifting and accounting for the voracious and merciless appetite of litigators, who knows where this might end up. Enforced skin grafts?

I am reminded of the furore surrounding the works of the graffiti artist Banksy. Who would have thought when he first started wandering the night-lit streets of Bristol armed with a few canisters of spray paint, that in years to come gaps would start appearing in walls and his works would end up in court.

But to me this all points to something deeper. The biggest reason that I have never wanted a tattoo is that I don’t want the ‘mark’ of another on my body. My body is mine, all of it is mine and I want it and me, to be as free as possible from any external influence of anything or anybody else. Or to put it in simple artistic terms, I don’t want to be a canvas for someone else. I want to paint my own painting of my life.

The modern philosopher Serge Benhayon has stated that “the truth of your life runs throughout your body”. Which to me means that my body is a brilliant reflection to me of the life that I am living, and it is a reflection that I use daily to support me in my choices -- in it’s most simple terms; live well, feel well. But the validity of this reflection relies on the body being mine and the truth of the legal is that once you have had a tattoo, then your body isn’t in fact, entirely yours. What fascinates me is that, in this case, the law feels exactly correct, the law is actually reflecting exactly what I perceive a tattoo is; an unbreakable tentacle between me and the artist -- me as a puppet, the artist as the puppet master and the tattoo as the string. That is not something I would ever, ever want. A fanciful metaphor you might think, but actually the law proves that it is 100% accurate.

The legal facts thus mean that about 1 in 4 people in the western world don’t actually own their own body.

I wonder whether full knowledge of this legal situation might make some people think twice about getting a tattoo".

The IPKat has long resisted any possible temptations to get tattoo'd, not least because of the mess it would make of his fur. However, he rather considers that the incidental filming of people who sport tattoos should no more be an infringement of copyright than the incidental inclusion of buildings, cars, shops or pedestrians wearing branded t-shirts or carrying fancy shopping bags should be regarded as infringing any copyrights, design rights, trade mark rights or indeed anything else.  If the tattoo is not actually part of the plot but is merely there because, well, it's there, what sort of remedy might a court even consider if an infringement were held to exist?

Merpel agrees and feels that this might just be a neat area for a fresh application of the principle of exhaustion of rights: once a tattoo has been released into the world, its author cannot stop its owner doing anything with it, in so far as it is part of him or her.  The copyright will still stop others executing the same work of art and exploiting the copyright, rather than the work itself.

The Edinburgh Military Tattoo here
When tattoos get under your skin: film extras face cover-up or getting peeled

Reviewed by Jeremy on Thursday, September 24, 2015 Rating: 5
The IPKat licenses the use of its blog posts under a Creative Commons Attribution-Non Commercial Licence.