Nedim Malovic Wednesday, November 13, 2019 - #IPKat, Italy, Nedim Malovic, shapes, substantial value, technical shape, tic tac, trade marks, Turin Court of First Instance
It was just a few months ago that the Court of Justice of the European Union (CJEU) (BMB v Ferrero, C‑693/17 P) sided with well-known foodstuffs manufacturer Ferrero by upholding the invalidity of a registered Community design right for comfit boxes and containers pursuant to Article 25(1)(e) of Regulation No 6/2002. This was due to a conflict with Ferrero’s international trade mark (below) representing the container of its Tic Tac comfits.

Now the latest news is that Ferrero has succeeded in defending the trade mark registrations for its Tic Tac container in the context of infringement proceedings brought in Italy.

The claimant, Ferrero, is a well-known manufacturer of foodstuffs, including comfits marketed as Tic Tac. Tic Tac comfits are sold in transparent plastic containers like the one represented below: 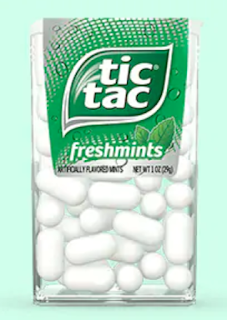 In 2017, Ferrero started proceedings for trade mark infringement and unfair competition against Mocca, a Czech manufacturer of comfits sold under the name Bliki which, as found by the Italian court,

not only do have the same shape and size of Ferrero’s [Tic Tac comfits], but are also packaged in containers that are substantially identical to those subject to the Tic Tact trade marks and, as a result, are an infringement thereof.

A comparison between Tic Tac and Bliki containers can be found below: 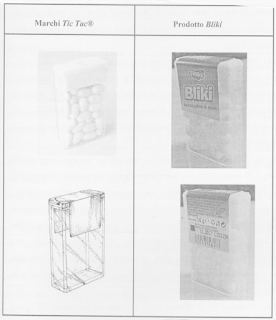 The court also found that the defendant’s activities amounted to unfair competition pursuant to:
The defendant had argued, inter alia, that: (1) an Italian court could have no jurisdiction in that the comfits were produced in the Czech Republic (however, as the court noted, sales had also taken place in Italy); (2) Ferrero’s trade marks would be invalid in that they are technical shapes and/or shapes that give a substantial value to the goods; and, even if they were considered valid, (3) no likelihood of confusion could be established due to the fact that the containers would carry different word marks and the shape of the Tic Tac comfits is a standard one in the reference sector.

With regard to the point concerning alleged lack of jurisdiction of Italian courts, the court noted that the claimant was enforcing two Italian trade marks, so that the applicable jurisdiction rule would be that in Article 120(1) of the Italian Industrial Property Code (in line with what is stated in Article 7(2) of the Brussels I Regulation recast, as interpreted by the CJEU in eDate and Wintersteiger), which sets forth the competence of Italian courts in proceedings concerning infringement of Italian IPRs, irrespective of the nationality, domicile or residence of the parties.

Validity and infringement of the trade marks

The court noted that the circumstance that different word marks would be present on the Tic Tac and Bliki containers is irrelevant, since what was at issue in the present case was the protection of 3D trade marks.

The court rejected the claim that Ferrero’s trade mark would be invalid, also noting that nothing prevents an object from being protected by different IPRs. In line with the CJEU Lego Juris decision, the court recalled that “the prohibition on registration as a trade mark of any sign consisting of the shape of goods which is necessary to obtain a technical result ensures that undertakings may not use trade mark law in order to perpetuate, indefinitely, exclusive rights relating to technical solutions.” This was found not to be the case here.

The court also excluded that the Tic Tac container would consist exclusively of a shape that gives a substantial value to the goods, in that the defendant did not prove that consumers’ purchasing decisions would be influenced by the appearance of the shape. In addition, the court recalled the CJEU decision in Henkel to point out that the container of Tic Tac comfits is not the shape of the product.

In sum, the court ruled that the claimant's trade mark were valid and infringed.
Ferrero succeeds in enforcing its rights in the Tic Tac container before Italian court

Reviewed by Nedim Malovic on Wednesday, November 13, 2019 Rating: 5
The IPKat licenses the use of its blog posts under a Creative Commons Attribution-Non Commercial Licence.