Over to Amy:
"Moderated by Nick Groombridge (Paul Weiss), the session began with USPTO Director Andrei Iancu discussing what he called the most important US patent law issue in recent years:  s101 subject matter eligibility.   In January 2019, the USPTO issued Guidance on the issue.  Ten months on it can be said that the Guidance is working really well: both anecdotally and as can already be seen from the statistics.  The new framework makes it very clear that s101 is a question of subject matter eligibility and not patentability.  The Courts are independent and do not follow the Guidance, at least they don’t seem to be yet, although Director Iancu still thinks there is hope that the Supreme Court will look at it.  Congress might also have to act but there is no pending legislation yet.

At the PTAB there have also been changes over the last 18 months which have resulted in largely eliminating multiple and parallel petitions, meaning that parties need to think carefully before filing petitions.  Just the previous day (31 October) the Federal Circuit had issued a decision finding that the PTAB judges were unconstitutionally appointed, and whilst Director Iancu had not yet had a chance to fully consider all ramifications of that decision, it seemed that the fix offered meant that they were now constitutional again!

In relation to SEPs, Director Iancu’s view is that any policy needs to encourage good faith negotiations.  To that end automatic rules are counterproductive – i.e. if an injunction is either always granted or never available.  This approach must be discouraged.

Randall Rader (former Chief Judge US Court of Appeals for the Federal Circuit, CAFC) expressed the view that the anti-suit and anti-anti-suit injunctions being issued are interfering with a global market place.  The jurisprudence for such international licensing disputes is broken and parties need to use arbitration.    On s101, Judge Rader’s view is that the situation is a result of the judiciary having abandoned the statute but there is an opportunity for the judiciary and Congress to fix it quickly.  In the Athena Diagnostics judgment on the en banc issue, the CAFC judges offered eight different eligibility opinions and the court was split.  Some are of the view that s101 has the purpose of preventing overly broad patents, when in fact that is a s112 enablement issue and not one of eligibility.  In his view, for the US to continue to be a leader in the patent world this huge issue needs to be resolved.

Lisa Jorgensen (AIPLA) then summarised the status of possible legislative reform on s101.  Congress have organised a number of roundtables on the issue since December 2018.  In June, there were three days of hearings which involved an unprecedented forty-five witnesses testifying. There have been two versions of a draft legislation in May and then in August, but there is a concern that there isn’t enough consensus.   Lisa was if the view that, whilst likely we won’t see anything out of the Hill any time soon, it is important to keep speaking to Congress.

Paul Coletti (Johnson & Johnson) commented that whilst there was an even split between the eight opinions in Athena, all of those opinions were asking the Supreme Court for help with the issue.  Last month the American Axle decision again resulted in a split decision (2:1) from the CAFC.  The dissenting judge in that case was of the view that the issue was a s112 one rather than a s101 one and referred to the situation as “validity goulash” due to conflating two different issues of patent law!  In Paul’s view things are not fixed; they are better, but they are still broken.  The USPTO Guidance is very helpful because now Examiners know what to do but, as Judge Rader also said, the decisions from the CAFC are panel dependent and that is not helpful for anyone. 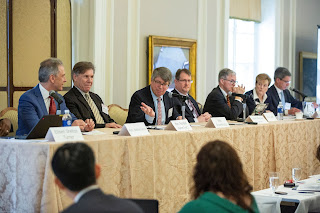 David Webster Jones (High Tech Inventors Alliance) gave the contrary view from a tech sector standpoint, noting that at least the tech universe is happy with the current position because s112 does not always help on overly broad claims and eligibility does have role to play in those cases, i.e. in the three areas of exceptions:  abstract ideas, laws of nature and natural phenomenon.

Ellisen Turner (Kirkland & Ellis) stressed how important it is to find a way to bring some consistency and predictability to the decisions.  Over the last five years there have been a huge number of wildly inconsistent decisions and legislative reform will at least bring more predictability.

In Director Inancu’s view the issue is on the verge of becoming one of national security.  The patent system must evolve for the technology that is important right now.  s101 takes off the table some of the most important inventions of the future, including diagnostic testing and personalised medicine which are hugely important for humans to have access to in the future.   In Athena, all of the judges said that diagnostic technology should be eligible but half of them found that they couldn’t find it to be eligible.  That is a huge problem for the US, in particular because other jurisdictions do allow patenting of such subject matter.  It is critical for consensus to be reached to allow the US to stay competitive in biotech, in AI, in blockchain etc.  Either legislation is needed for the Federal Circuit to fix it or the Supreme Court must look at the issue.  They could simply choose to apply the USPTO Guidelines, which are actually very similar to the European framework.

Klaus Grabinski (German Federal Court of Justice) commented that whilst there are some patent issues that all jurisdictions are struggling with, patent eligibility is just an issue that the US is struggling with!  In Europe there is a list of exclusions, but they are only excluded “as such” which means, for example, that whilst a particular sequence of algorithms is not patentable, once a function is added it is patentable.  This puts the focus on the issue of obviousness, which is what decides most cases in Europe.  In Germany the court structure is very different, with the Federal Court of Justice having the final say in all cases and having specialised judges.  This may explain to some extent the development of patent law in Germany (and similarly in the UK).

In relation to SEP disputes, there are currently cases pending in Germany where the US courts have ordered anti-suit injunctions and subsequently the party in the German proceedings has aksed the Court for an anti-anti-suit injunction.  Such cases raise a number of questions as to how to deal with cases pending in two jurisdictions dealing with overlapping subject matter.   Which court should have jurisdiction? The better one?  How would that be determined?  In Europe the Brussels Regulation applies to result in the court first seized having jurisdiction but of course that does not apply to the US.

Judge Rader agreed that of course in a global market place there will be global disputes.  There will be an inevitable conflict as courts try to deal with a global market with only their sovereign remedies.  A single international remedy is needed.  Arbitration needs to be improved for a global resolution to a global problem.

Ellisen commented that the fundamental problem here is that there is unilateral obligation on an SEP owner but not on the implementer and that patents are territorial whereas contracts are international in scope.  Huawei had only 1% of sales in the UK and 85% in China and yet the UK courts set a global FRAND rate much higher than the rate would have been in China.  That is a global trade issue for Huawei and needs to be addressed at a contractual level with the standards setting organization (SSO).  Maybe the SSO should set the rate itself, although of course there are competition issues with that as well. "
JMLS IP Conference (Report 2): Patent eligibility, anti-anti suits and the era of unpredictability

Reviewed by Annsley Merelle Ward on Friday, November 22, 2019 Rating: 5
The IPKat licenses the use of its blog posts under a Creative Commons Attribution-Non Commercial Licence.