In order to be irreplaceable, one must always be different: Chanel in trade mark dispute over GABRIELLE mark - again

"There is no time for cut-and-dried monotony." Chanel decided not to follow these words from its founder. Instead, it chose to again lock horns with Catherine Sidonio over trade marks involving the word GABRIELLE.

In December 2017, Chanel Limited applied to register the trade mark CHANEL'S GABRIELLE in respect of goods in classes 9, 14 and 18. Gabrielle is the first name of CoCo Chanel, its founder.

The application was partially opposed by Catherine Sidonio, based on the UK trademark registration for the mark GABRIELLE for various goods, including those in class 25. She claimed that the respective goods were similar and that the marks were similar, so much so that CHANEL'S GABRIELLE gave the impression of a collaboration between the parties.

This is not the first time the parties have come across one another and Chanel referred to a previous decision (BL-O-646-17), in which the same parties had played "inverted roles". In that decision, it was held that there was no likelihood of confusion between the marks GABRIELLE and GABRIELLE CHANEL for identical goods in class 25.

Sidonio produced a variety of evidence, including copies of "Coco Chanel" posters that related to three films produced in 2008-2009, web prints showing clothing items branded with "GABRIELLE BY MOLLY BRACKEN", and a web print stating the French brand origin of MOLLY BRACKEN, which was launched in 2008.

Sidonio, also argued that she is a successful designer and that GABRIELLE is one of her most popular brands, pointing to 26 worldwide applications for the mark GABRIELLE (nine of which have proceeded to registration). It was noted that influencer Rachel Susan Hyde had promoted the brand and it was argued that the relevant public were aware that GABRIELLE was one of the MOLLY BRACKEN brands. Evidence was also produced to further the argument that CHANEL'S GABRIELLE would be seen and understood to be a collaboration between the two brands.

The CHANEL GABRIELLE bag was launched in March 2017 in a campaign that included four celebrities, adverts in a number of industry magazines and on social media. Submissions were also made by Chanel on the public awareness of Gabrielle Chanel and Chanel submitted evidence that there had been promotion of its CHANEL GABRIELLE bag prior to its application.

The remaining evidence focused on the reputation of Chanel as one of the world leading fashion houses with global revenue of $9.6 billion for 2017. All other figures relating to sales and advertising were subject to a confidentiality order.

Citing El Corte Ingles, Case T-443/05, in which it had been established that there is a degree of similarity between clothing (in class 25) and clothing accessories made of leather and imitations of leather (in class 18), the court noted that classes 18 and 25 cannot be treated as dissimilar, but that did not mean that they were anything more than similar to a low degree. It stated as follows-

The same conclusion was drawn in respect of cufflinks and tie pins (class 14) on the basis that they are fashion accessories with a fastening function relating to clothing. There is science in adornment after all. In relation to the other goods, namely jewellery; charms; decorative pins; brooches; medallions (class 14) and sunglasses; sunglasses frames and lenses (class 9), it was noted that the goods belong in adjacent market segments.

The hearing officer also rejected arguments that consumers often buy luxury goods on the basis of the prestige of the trade mark rather than the actual need to purchase an item on the utilitarian basis of fulfilling a very specific need. Sometimes elegance is refusal. 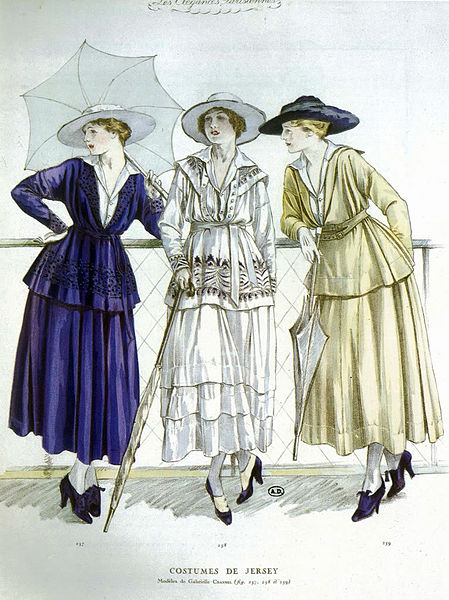 The average consumer and the nature of the purchasing act

As per Sabel BV v Puma AG, the average consumer normally perceives a trade mark as a whole and does not proceed to analyse the various details.

On that basis, the hearing officer concluded that a large group of consumers will recognise Chanel as the name of the renowned fashion house and that it trades under the name of its founder. Although some consumers may know that Gabrielle was the first name of Mlle. Chanel, the average consumer will not. Consumers who are familiar with Chanel will perceive CHANEL as the house mark and the use of an apostrophe in CHANEL'S GABRIELLE makes it likely that consumers will consider it to be a brand of CHANEL.

Chanel submitted that the visual and aural similarity was very low, noting that the beginning of a mark is generally more focused on. The opponent submitted that decision on similarity should follow the previous case, in which it was considered that there was a medium degree of similarity between the signs GABRIELLE and GABRIELLE CHANEL. The approach taken in the previous decision was preferred and it was held that the inclusion of the name GABRIELLE gave rise to a medium degree of visual and aural similarity. The hearing officer came to the same conclusion in relation to the conceptual similarity.

It was noted that the contested mark would be recognised by most consumers as a reference to Chanel, the renowned fashion house, and that the significance of CHANEL'S GABRIELLE as a whole will be that of GABRIELLE belonging to CHANEL, with GABRIELLE performing an independent distinctive role within the mark.

It goes to show that in order to be irreplaceable, one must always be different, at least when it comes to trade marks.

Picture is in the public domain.

In order to be irreplaceable, one must always be different: Chanel in trade mark dispute over GABRIELLE mark - again

Reviewed by Neil Wilkof on Friday, November 15, 2019 Rating: 5
The IPKat licenses the use of its blog posts under a Creative Commons Attribution-Non Commercial Licence.